First and Last: When the Pandemic Became Real for One Maplewood Photographer

The email from the news organization asked for readers to send them the last normal photo before the pandemic lockdown and the first photo taken after lockdown had started.

As a photographer, I ran to my photos. And found the last photo prior to lockdown, March 11, 2020. And then I looked to see the next photo I took.

And it wasn’t right. It wasn’t correct. The dates meant nothing. They meant nothing because there was no bright line that separated the Before and the After.

Like the proverbial frog in a pot of water on the stove, you don’t know what’s happening until it’s too late.

Late summer early fall, my spouse was making noise about a major home repair. Now it was time to tackle it. He was tired of the bandaids which had been in place for oh, 20 years. Also, the ‘new’ car was over ten years old, had an oil leak, and was costing us serious money now to keep running. We needed to spend some money.

I knew we had to, but I kept stalling.

Because there was a feeling of dread, just out of reach. Just behind me. Just out of sight. A sense of uneasiness that would rise up inside me when we spoke about upcoming plans. Of vacations. It’s happened before. The dread. The knowing something was going to happen. In 2010, my father passed away while my family and I were on vacation. But in the months and weeks before, I could not get excited about going on vacation. Nor could I get going on packing and organizing the trip. The universe likes to marry planners with people who realize they need to do laundry on the morning of the day you leave on vacation. I was not into planning and packing because the voice in my head kept saying ‘it’s not going to happen’. The voice was off by 5 days.

And so in late summer 2019, that same small but persistent voice rose up again. But this time it was something big. Seeing that my dear husband already thinks I’m crazy, all I could do was stall. All I knew was we couldn’t spend the money on fixing the house or buying a new car. All I can describe it as is standing on the beach on a moonless night knowing there’s a huge wave out there somewhere and it was rushing in towards me all alone on the dark beach. I could sense it but not see it.

So do I pick a photo from midsummer? When I didn’t have this feeling? Or because I couldn’t name this hazy dark cloud that was out there somewhere, do I pick November 2019? Since it was before the new stories about Wuhan in December 2019? When NPR was reporting about massive field hospitals being built in China. Or is it January 2020 just before I bought a huge container of healthcare grade wipes that specifically said it killed the human coronavirus? Or the beginning or February 2020? When I took a flight to visit a friend in Florida. The middle seat was open. I had the window. My aisle seatmate offered me her hand sanitizer to clean the area around me. I pulled out my own and we slathered Purell on every surface we could. Or maybe March 10 when I went to Stop and Shop and bought a few of my daughter’s favorite snacks? I would be picking her up the following day because the university was sending everyone home early for spring break.

Was it March 4, the last time I saw my mom in person when I accompanied her to a doctor’s appointment? Within weeks following that appointment, the nursing home locked down. It’s still locked down.

The last photo I took before the pandemic started could have even been after it started. Because most of us had no clue, because the majority of us had no institutional knowledge of what it was like to have a normal world one day and a severely altered one the next. We were privileged. Is my Last Photo one of privilege? The privilege of not knowing a world where life can dramatically shift without us noticing until it actually affected us?

The First Photo after the pandemic hit.

Should it be one where we think we’ll be back in a few weeks? The university told my daughter to pack for three weeks away from the dorm. The little tidal wave of that dark voice stalking me from behind made me tell her to take as much as we can fit in the car. Is it trying to wrap our brains around not knowing what will make us sick? Is it the empty toilet paper shelves? Waking up a 4 p.m. to get a grocery delivery slot? Was it 3 p.m. on March 11 when my husband’s office told him the work from home experiment worked and that he’ll be home at least for the month? Is the First Photo of quarantined mail? Is it my neighbor’s new puppy? Is it a screenshot of my booking software of the crushing reality that every single job I had lined up was not going to happen? That all the mitzvahs, weddings and events were all going to not happen on the day and in the way they had been planned in the Before times.

Is the First Photo when I realized what was lost?

Beyond the obvious of lost work, was it the loss of coffee with friends, hugs, eating out, vacation, a piece of myself, human interaction, milestones…lives?

Or could it be the loss of the various impediments that have held me back from doing things. Nothing like being told you can’t do something to overcome the fear of the unknown.

Or was it the first time I realized that I loved hiking. Going places I have never been before and spending hours alone in the woods. The sense of now. Being present in the moment. What this the First photo? Or was it my sourdough? Or maybe the complicated meals I now had time to create? Or the garden I had barely spent enough time in because of work. Was it the realization I was running myself into the ground with work and that maybe I could back off a bit. Or was it the first time I did nothing and didn’t feel guilty about it? Okay, that last one was only for five minutes…

Now for my photos. The Last and First.

The Last is the view of the upper Hudson at Olana, Frederick Church’s home near Catskill NY. Because it was the very first of what was to be a series of adventures I had finally given myself permission to take. It was early August 2019 and I had so many plans to explore all the places I never had the time and I was finally going to make the time. It was a privilege not just to be there but to have the ability to just get up and go. Many don’t have that ability or freedom. 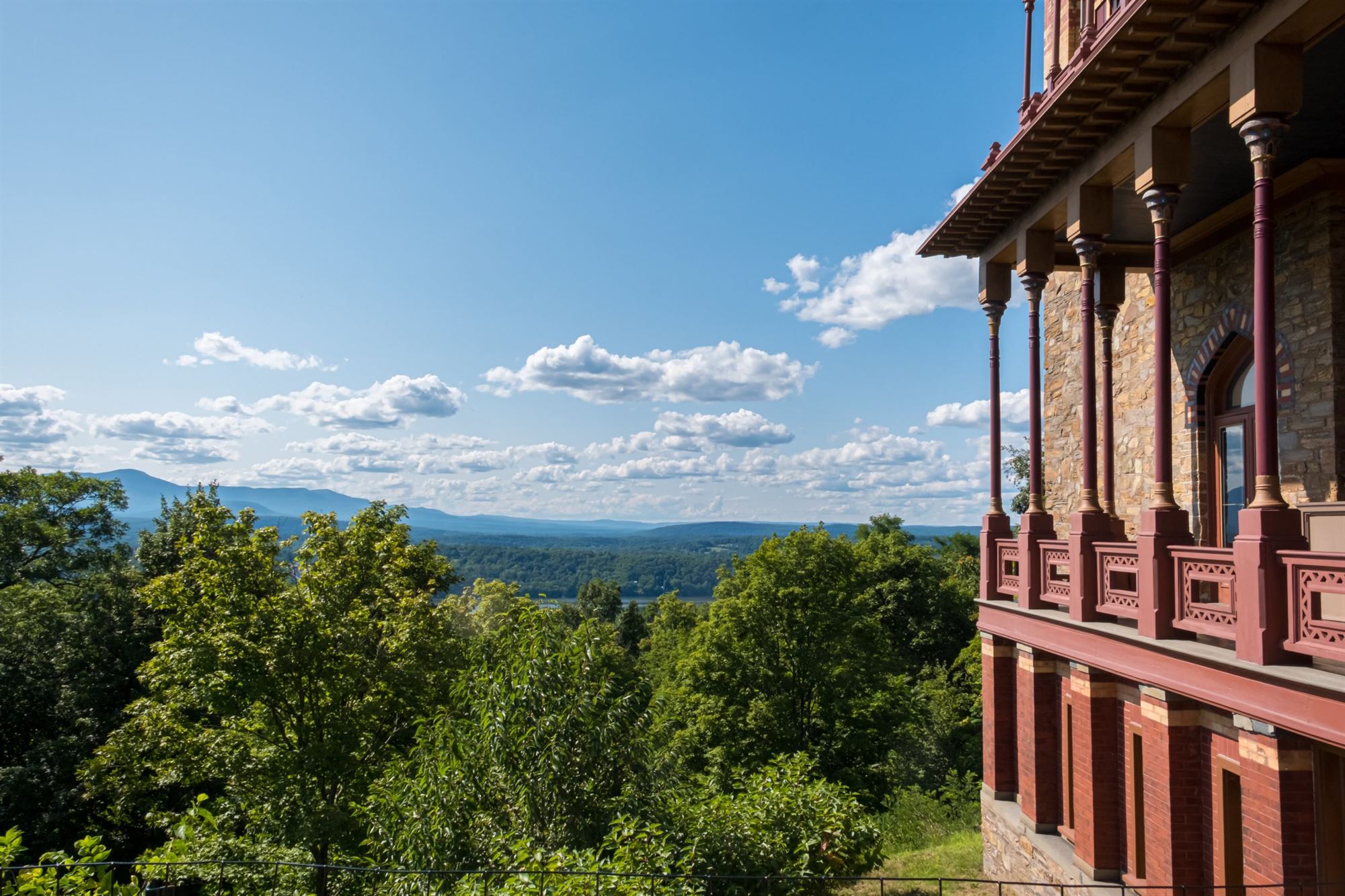 And for the First.

The First was when the pandemic became real on Mother’s Day 2020. It was the day I realized I wasn’t going to get my haircut anytime soon and it was way too long. So I asked my daughter to shave my head. It was delayed acceptance manifesting itself in a drastic fashion. 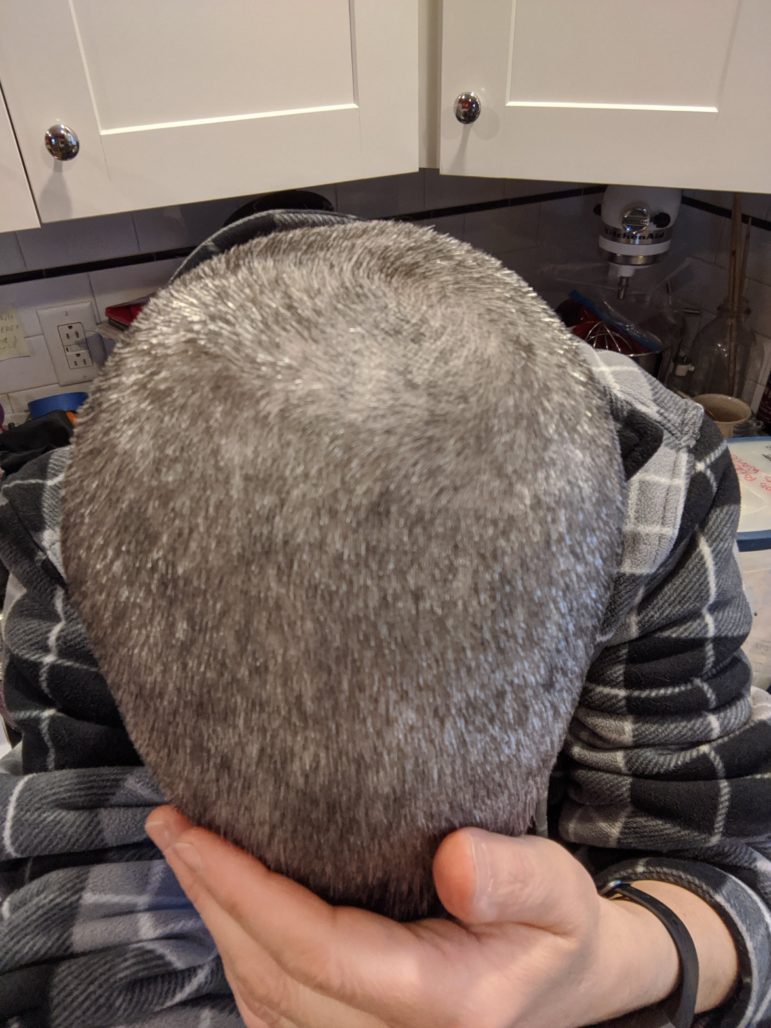 To round out the series, I should pick a Normal Photo. One that represents our return to normal. That one will be hard to find. We’re never going back to the before Normal. We have been broken in ways we don’t fully understand. Some in good ways and some in bad ways. But this experience will leave a mark on us for generations.
Read and see more from Joy Yagid.
Joy YagidMaplewood NJOne Year of COVID-19Pandemic Anniversary
0 comment
0
FacebookTwitterPinterestEmail