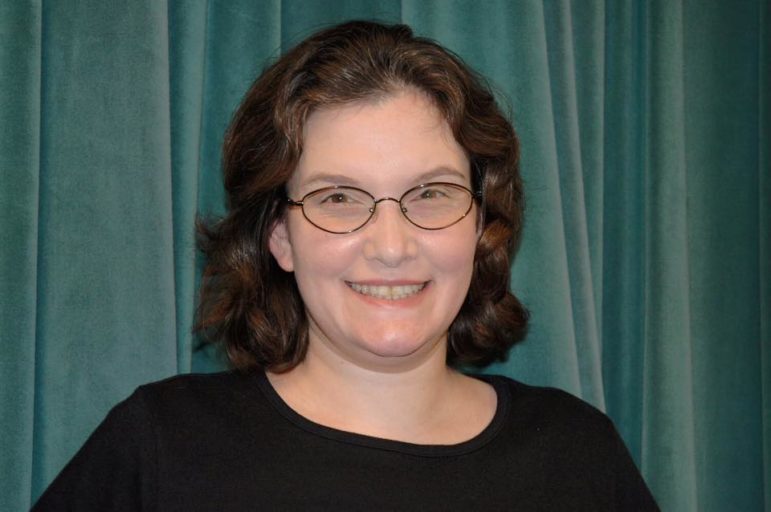 A memorial service for Caitlin Evans Jones will be held  Friday, June 9, 2017, beginning at 5:00 p.m. at the New Jersey Performing Arts Center’s Victoria Theater in Newark.

Caitlin’s family and friends are inviting the community to join in celebrating Caitlin’s life and achievements. NJPAC is where she pursued her passion for creating, promoting and providing scholastic arts education in New Jersey for more than 14 years.

A reception will follow at the Center for Arts Education with refreshments and cold buffet.

Discounted ​parking will be provided for attendees using the Military Park garage across from NJPAC. NJPAC is located at One Center Street, Newark, NJ.

Caitlin Evans-Jones, 48, passed away unexpectedly and peacefully on March 14, 2017. Born Fabiana Politi on June 28, 1968 to Rolando Politi and Elizabeth Evans in Queens, New York, Caitlin had two passions, her family and the theater.

She was a loving wife to husband Gywnton and supportive mother to her two children, Dylan Maxfield, a sophomore at Columbia High School; and Camryn Rose, a fourth-grade student at Tuscan Elementary School. Caitlin played an active role in supporting their many activities and sports. For the past 11 years she worked as the production stage manager directing technical and backstage crews for Tuscan’s annual stage show. She had been finalizing rehearsals for this year’s show, which will be presented March 24-26 and will include tributes to her life and dedication to arts education. Her daughter Camryn asked to work on the show’s crew because “she wants to follow in Mommy’s footsteps.”

Caitlin was an active supporter and volunteer at the South Mountain YMCA in Maplewood where her children participated in its youth development, arts, sports and summer day-camp programs throughout her children’s early years, and where she has been honored for her many contributions. She never missed Dylan’s basketball games, from the YMCA days years ago to his current position on the Columbia High School team. More recently she was assisting with leadership of her daughter’s Girl Scout troop. She will be remembered as one of the most supportive and vocal fans of every basketball, softball and baseball game both of her kids played. She was so proud of both of her children and loved to see them pursue their own paths.

Her life-long passion for the performing arts began with a fourth-grade musical play. She graduated from Chapel Hill High School in 1986 and earned a Bachelor of Arts degree from the University of North Carolina in Chapel Hill. During her senior year she interned at The Goodman Theatre in Chicago with acclaimed director Mike Nichols. While attending UNC she legally changed her name to Caitlin Evans. Upon graduation in 1990 she moved to New York City with the Theatre’s production of a Jules Feiffer play “Elliot Loves.” After the production closed, she attended the prestigious “The New Actors Workshop,” a two-year acting conservatory in NYC co-founded and taught by master teachers including Mike Nichols. She graduated in 1993.

Caitlin lived on Manhattan’s Lower East Side, for a while as a squatter on 13th St. in Alphabet City and, while pursuing a performing arts career, took an executive hostess job at Madison Square Garden. She and Gwynton met in 1994 when both were working the NHL All Star Game. Two years later, they were married in a ceremony at the Garden where the coming event was announced and the occasion celebrated in the lights of its iconic marquee fronting Seventh Avenue. They lived in Queens for a short time before moving to Maplewood, New Jersey in 1997 to be near where Caitlin had been hired by Arts Power, a national touring theatre company.

In 2003, Caitlin began work in the Center for Arts Education at the NJ Performing Arts Center in Newark where she rose to the position of Senior Director of Partnerships and Professional Development. She drove NJPAC’s programs for conducting in-school and community-based training in dance, theater and music throughout the state. According to a statement by NJPAC, “Thousands of students looked up to Caitlin throughout a 14-year career here, and their families, teachers and neighbors recognized her as a person willing and capable of changing their children’s lives in wonderful ways.” Her leadership and talent in promoting arts education has been recognized by numerous statewide organizations; she received the Governor’s Recognition Award for Arts Leadership in May, 2015 at a NJ State Council on the Arts celebratory annual gala.

Caitlin was very proud of her suburban Maplewood community, its people and artistic lifestyle. That community has reached their loving arms around her family during her brief hospital stay and after her sudden death. She was a remarkable woman known for her generosity, integrity and passion for the performing arts. To help fund her children’s higher education, community residents have established a GoFundMe website page (https://www.gofundme.com/assistance-for-the-jones-family?). In addition to her husband and children, she is survived by her parents, an uncle and cousins.

If you wish to honor Caitlin’s memory, please consider making a donation to NJPAC or the South Mountain YMCA.

Colleagues of Caitlin at NJPAC have set up an education fund for her children on GoFundMe. To contribute, visit: https://www.gofundme.com/dylan-camryn-jones-education-fund.

To contribute to a fund for general expenses for the Jones family, visit: https://www.gofundme.com/assistance-for-the-jones-family.