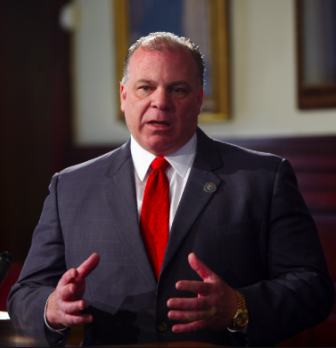 For the last month and a half, New Jersey Senate President Steve Sweeney has been barnstorming the state advocating for his plan to reform school aid so that the distribution of aid corresponds to the distribution of need in the present, not as it was in the 1980s.

What Steve Sweeney is doing with state aid is touching a third rail of New Jersey politics because his plan doesn’t solely rely on distributing new state aid more fairly, which is what previous New Jersey aid laws have done.  Sweeney proposes to do what has never been successfully done before in New Jersey, which is to reallocate about $500 million in state aid from districts who get more aid than New Jersey’s aid law says they need and give that money to districts who get less than they need. Sweeney’s call for reallocation makes legislative passage much more difficult, but it is an acknowledgement that economic and debt realities make fairly funding SFRA (the School Funding Reform Act of 2008) without redistribution impossible.

The background of this bill is the total irrationality of New Jersey’s state aid distribution, where scores of districts are overaided and underaided by thousands of dollars per student. Although it makes no rational sense to give districts more money than they need while hundreds of other districts get less, this is actually what SFRA calls for due to a provision called “Adjustment Aid” that ought to be called “aid hoarding.”

According to Steve Sweeney, through the combination of reallocating that $500 million in Adjustment Aid and increasing overall K-12 aid by the same amount, every district in New Jersey will receive 100% of its recommended state aid.

The biggest beneficiaries of a redistribution would be poor non-Abbotts, but a redistribution might greatly benefit South Orange-Maplewood, since in percentage terms we are among New Jersey’s most under-aided districts, getting only $4.3 million when the state’s formula says we should get $17.3 million. It’s little known, but we get less state aid today with nearly 7,000 students than we got in 1989-90, when we got $4.8 million for only 4,500 students. Steve Sweeney wouldn’t think that South Orange-Maplewood is the worst-off district in New Jersey, but he is aware that South Orange-Maplewood is badly under-aided and overtaxed and actually cited us in an editorial he wrote a few weeks ago.

Sweeney and his allies don’t grab the third rail with their bare hands.  Instead of attempting to push through the legislature a bill that would openly take aid away from scores of districts, Sweeney is proposing a four-person commission that would be insulated from politics to propose the reductions and grab that third rail. The bill would then face an automatic up-or-down vote in the legislature.

The commission approach has gotten some criticism, but I believe it’s necessary given the legislature’s history with state aid. In the early 2000s, the legislature fought off Jim McGreevey’s attempts to redistribute some aid and later inserted Adjustment Aid into SFRA in 2008. Every budget season certain powerful legislators try to use their power to win more aid for their districts, even when their districts are not among New Jersey’s neediest. For instance, in 2015 the legislature attempted to give another $1 million to Montclair for blatantly political reasons. The most truly under-aided districts – like Bound Brook, Manchester Regional and Freehold Borough, are represented by less powerful and less interested legislators and are ignored year after year after year.

Sweeney is a powerful legislator himself, but this bill has an uphill struggle. If Hoboken, Jersey City, and Asbury Park were typical of over-aided districts, then passage would be easier, since Hoboken and Jersey City economic improvements are undeniable and Asbury Park’s $24,000 per student in state aid is indefensible, but many over-aided districts have become over-aided due to population loss. These districts include many rural districts, many districts at the Jersey Shore, and even some very poor districts like East Orange and Camden. These districts will protest that just because a district loses 10% of its students, doesn’t mean that its costs are reduced by 10% and resist reform.

Since Steve Sweeney came out with this proposal in early June, it’s gotten praise from some editorial boards, mayors and the NJ School Boards Association. Gov. Chris Christie has a competing, radically unfair alternative proposal, but Sweeney’s proposal is actually similar to a redistribution policy that Christie himself supported back in 2012-13.  When asked if he would sign Sweeney’s bill, Christie in fact told NJSpotlight, “I don’t know, it depends what it looks like. Let’s see what lands on my desk. I’m not opposed to it.”

Christie is very erratic and might veto Sweeney’s bill anyway, but what is more disappointing (to me) is the criticism the bill has gotten from the Left, specifically the Education Law Center (the law firm for the Abbotts) and its primary funder, the NJEA. The Education Law Center naturally supports putting another $500 million into state aid, but opposes all but a trivial amount of redistribution. The NJEA is demanding that charter school funding be addressed.

Rivalries within the Democratic party also hurt the bill’s chances. Shortly after Sweeney announced his bill, Assembly Speaker Vincent Prieto, who actually represents extremely under-aided districts including Kearny, East Newark and Fairview, threw cold water on Sweeney’s proposal and said New Jersey should fully funding SFRA as it is written, without changes. (Prieto has presented no pathway to full funding.)

I wish Sweeney’s bill were more comprehensive and better distinguished between capped aid and uncapped aid targets, but even if the only thing this bill did was redistribute Adjustment Aid, amend the tax cap, or reform PILOTing it would still be a good proposal. Overall, Sweeney’s bill is a pragmatic and progressive attempt to write a law that will get Chris Christie’s signature so New Jersey can start aid reform prior to 2018. The narrowness of the commission’s mandate is because this will be a commission empowered to write law and it is unwise to give too much power to an extra-legislative body. Any cut in money to charter schools would be a poison pill.

And if the commission’s bill is bad, the legislature can still vote it down.

Unfortunately, many critics of Sweeney’s bill do not know New Jersey’s aid history and that New Jersey has almost always underfunded its aid formula going back to 1976. Critics refuse to connect New Jersey’s 15 years of relative economic stagnation and extreme indebtedness to the underfunding of SFRA and place all of the blame on Chris Christie. Some critics forget that Christie is still the governor through January 2018 and dominates the budget process.

SFRA was passed in 2008 on the premise of spending more money, more fairly, but given New Jersey’s intractable economic malaise and deep indebtedness, the “more money” has not materialized. New Jersey now has to think about how to spend money more fairly. Sweeney’s bill does this in a responsible, moral way and I think it’s something that merits support.

Jeffrey Bennett is a former member of the South Orange-Maplewood Board of Education and writes the New Jersey Education Aid blog.

To see a breakdown of state aid per district, visit here.