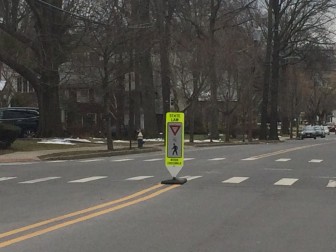 The town has purchased and installed six new pedestrian crosswalk signs for Prospect Street at Bowdoin, Courter, Oakview, Madison, Elmwood and Franklin Place. The signs were installed in time for the morning commute on Thursday, Feb. 11 — to the delight of local residents.

“We believe Prospect is wide enough to accommodate these in-street signs and not interfere with traffic,” said DeLuca. “We also asked PSE&G to provide estimates for street light upgrades at seven intersections along Prospect.”

Maplewood police will also be performing radar and crosswalk patrols in the area, said DeLuca. The police have stepped up patrols along Prospect and on other streets in the area after an elementary school student was hit by a car last fall near Hilton and Prospect (speed humps and crosswalk signs were installed there last fall). A Maplewood man was struck near Franklin Place after dark in the rain in December.

The town is planning an traffic safety summit, with the date to be announced. The summit will bring together township representatives, traffic professionals from county and state departments of transportation, and experts from colleges and universities to explore the issue and discuss potential steps to improve traffic safety.

The recent departure of Township Engineer Thomas Malavasi for a new job as Engineer for Hudson County has delayed the scheduling of the summit, said DeLuca.