Neighbors are reacting with happiness and relief to the temporary rubber speed humps installed in two locations on Prospect Street south of Springfield Avenue in Maplewood.

Numerous residents of the area came out to the Maplewood Township Committee meeting in October to complain of insufficient traffic calming measures and enforcement in the area after a 7-year-old boy was struck by a car on his way to school on October 15 (the boy, though bloodied, did not sustain life-threatening injuries). Neighbors said that pedestrian crosswalk striping, flashing signs and a raised intersection had been insufficient in deterring speeding on the road, which is a throughway to Union township to the south as well as to Route 78.

On Friday, November 13, Maplewood Township installed the two speed humps — one between Lexington and Franklin streets and another between Lexington and Revere — as well as additional signage alerting motorists to the humps. (Maplewood Police also conducted pedestrian crosswalk enforcement and traffic details in the area between Oct. 19-25.)

The speed humps seem to be doing the trick. On Nov. 17, VillageGreenNJ.com observed dozens of motorists slowing down for the humps. While we were photographing the humps, Bennett approached and volunteered that he and other residents were delighted with the installation. While chatting with Bennett, we noticed that one motorist did not stop for a pedestrian in the crosswalk; however, “they’re going slow enough now that they won’t knock him over,” said Bennett.

Mayor Vic DeLuca reported that the rubber speed humps are being used “to better understand impact. If they work well, we will install asphalt humps.”

DeLuca said that the humps were the idea of Committeeman Jerry Ryan.

“They’re relatively inexpensive and quick to put in,” explained Ryan. “That’s the reason I suggested using them: 1. we had used them before in other places and knew how they worked, 2. we could just put them in without needing to get asphalt, and 3. they could be easily adjusted or moved if need be. If we get to the point of a permanent installation, we’ll have more knowledge about optimal placement of the humps.”

At this point, Ryan said he was not certain how long the temporary rubber humps would be in place. “I am certain that we’ll hear from folks in the neighborhood soon enough, and we’ll likely reach out to them in any case once things have been in place for a few weeks.”

Click on the images below to see a brief slideshow of the humps and signage. 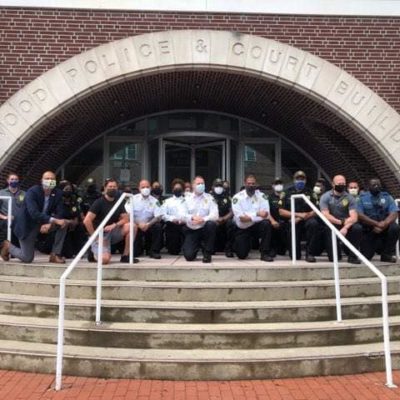