Maplewood Engineer Tom Malavasi Moves On to a Bigger Job 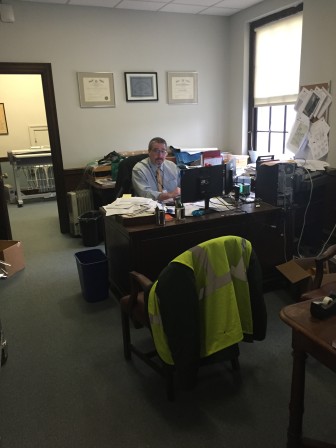 As Maplewood was abuzz with talk of an historic snowstorm on Friday, January 22, Township Engineer Thomas Malavasi quietly slipped out the door of Town Hall for the last time.

But not before his co-workers alerted us to the fact and surreptitiously snapped a photo of the camera-shy Malavasi.

Jan. 22 was Malavasi’s last day on the job in Maplewood. The well-liked and respected town engineer is moving on to a new job as engineer for Hudson County after five years at the engineering helm in Maplewood.

Instead of one town, Malavasi will now oversee 12 municipalities in Hudson County.

“The work done by the County engineering department is much the same as the Township Engineer, just on a larger scale,” said Malavasi via email. “I will oversee improvements to streets, buildings, parks, recreation facility and bridges. The capital improvements managed by the County range from $90 million to $100 million dollars a year. The Maplewood budget is in the range of $3 million.”

Malavasi said he’s not daunted by the scale of the job: “I am very excited to deal with these larger challenges.”

Nonetheless, Malavasi said he’s enjoyed his time in Maplewood: “The projects have been diverse and rewarding. We have done things ranging from road upgrades, to elevators, to bathrooms to wall repairs on the river to new decking on the pool. Probably the biggest job that I am happy about was the pool renovations. We were able to put in a whole new deck around the pool and add the slides, something the residents really seem to enjoy.”

Malavasi said that Maplewood and its residents provided good challenges and rewards for the job. Calling Maplewoodians “engaged,” Malavasi said, “I always get calls from folks who genuinely care about the issues they have. I hope that most times I was able to help them quickly. Sometimes their requests challenged me and normal convention and made us look deeper into solutions to work things out. Even if we were not able to solve a particular problem, they always appreciate the effort. I will miss the residents of Maplewood.”

Maplewood will miss Malavasi too.

Planning and Zoning Board Administrator Adele Lewis wrote, “Tom was a pleasure to work with and for. As the department head for the Planning and Zoning Department, he provided a perfect balance of high expectation and professionalism while maintaining a great sense of humor. He will be greatly missed.”

“I really enjoyed working with Tom and that I’m sure that he will be successful with his new opportunity,” said former Township Committeeman Jerry Ryan, who acted as liaison to planning and zoning. “It’s always good to see a fellow Cooper Union grad doing well!”

Township Administrator Joseph Manning called Malavasi “a Renaissance man” who takes an engineer’s view into all aspects of life. “He hunts game birds and deer. He makes his own venison jerky. He brews his own beer and fixes his own watches. He is interested in basically how things work.”

“Tom was a real asset to our community, and I am sorry to lose him. I personally always found him to be engaging, responsive and informative. His will be large shoes to fill,” said Township Committeewoman India Larrier.

Newly minted Maplewood Deputy Mayor Nancy Adams summed up her experiences with Malavasi as a resident and an elected official: “While I knew Tom all the years he was in Maplewood, I only worked with him for a little while as a member of the TC and occasionally on Planning Board. He was always very receptive and responsive to my emails of concerns as a resident and I’ve seen his professionalism and thoroughness in his duties that quickly showed themselves during my brief time with him in my role as TC member and Chair of the Engineering, Public Works, Planning Committee. He was extremely helpful and careful to finish up his position here by tying up all the loose ends he could before he left to be the County Engineer in Hudson County. They are very lucky to have him and I will miss his thoroughness and careful advice as our Engineer.”

The Township has hired interim engineer Andrew Cangiano, P.E., P.P., from the firm of Keller & Kirkpatrick to fill in while it searches for a new permanent township engineer.