From the South Orange Rescue Squad:

The South Orange Rescue Squad will hold a Gala Celebration on Saturday May 7, 2022, to celebrate the 70th Anniversary of service to our community and to honor past President and Squad Member, South Orange resident Sharon Mayers Schwarz. 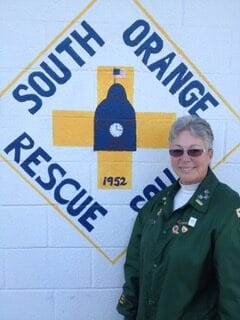 The Gala will be held at the Maplewood Country Club, 28 Baker Street at 6pm with Open Bar, Entertainment, Dinner, chances to bid on prizes from local merchants and special guests.

Sharon Mayers Schwarz joined the Rescue Squad in 1977 and was active for 28 years. She handled thousands of emergency calls including delivering three babies. Sharon was President of the Squad from 1985 to 1988, and 1993 to 1994. The Squad is thrilled to honor her for more than a quarter century of service to her community.

The South Orange Rescue Squad was established in 1952 by a group of residents and business owners as an all-volunteer organization. At that time, a single ambulance was housed in a garage across Sloan Street from the Fire Department.

For the past 70 years the Squad has consistently served the community at all hours of the day and night with immediate 911 response and free medical treatment and transportation, without ever charging a fee or sending a bill for services rendered.

Tickets are available now to help raise funds to purchase their new Horton 2022 Ambulance that will replace a 15-year-old vehicle at the end of its duty life.

The Rescue Squad’s operational budget comes from tax deductible contributions from the community; it is not taxpayer funded.