Board of Ed Votes Unanimously to Ratify Teacher Contract 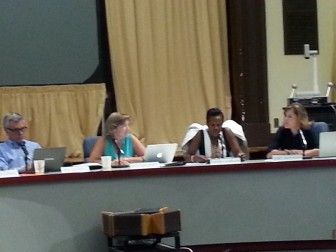 South Orange – Maplewood Board of Education

“On behalf of the board, I would like to thank the SOMEA negotiating committee for its cooperation in working with us to reach an agreement that is mutually satisfactory to both parties,” said board member Sandra Karriem, chairperson of the BOE’s negotiations committee.

“With an agreement in place, our district can focus its energy on improving teaching and learning for our students and staff,” Karriem said.

The board voted 7-0 to ratify the agreement, but not before some controversy. Board member Johanna Wright, who is required to abstain from the vote because her daughter is a teacher in the district, recommended the board table the vote because of what she said were “inflated” numbers in the district’s budget line item relating to teacher salaries.

Included in the salary line item were classroom supplies, reference materials, furniture and other items, she said. Wright said she was asking the County Superintendent’s office to investigate the matter. BOE President Beth Daugherty said the salary numbers used in negotiations were accurate and were agreed on by both the district and SOMEA.

The board meeting was the first where James Memoli, the current acting superintendent, presented the district’s monthly progress report. 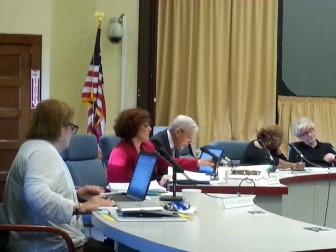 In other board news:

The board added a new item to its district goals: to have an emergency management program “that exceeds State requirements” and to “establish confidential security monitoring reporting.”

As part of the program, the district accelerated the implementation of its new automatic notification system – better known as the “panic button.” The system is being installed and re-tested over the summer in cooperation with the South Orange and Maplewood police departments, and staff will be trained in how to use the system.

Daugherty said that while the public will be given enough information about the security program to know that “buildings are secure, protocols are in place, [and] accurate information is distributed,” the specifics must remain confidential.

“We have had far too many open conversations about exactly what our security measures are,” said Daugherty. “We need to keep details at a minimum” so as not to compromise security measures.

The 2015-2016 school calendar was amended; in addition to some minor alterations, the February break will be shortened by one day.

The Gifted & Talented program is scheduled to be implemented in the fall of 2015; however, the district is still working out the details of what the program will entail.

Regarding the superintendent hiring process, Daugherty reported that a candidate the board had hoped to appoint as interim superintendent had withdrawn his application for personal reasons, which means the board now goes back to the drawing board in finding an interim.

The board would like to have a new permanent superintendent in place by no later than July 1, 2015, said Daugherty, but would hire someone sooner if it found an excellent candidate.

Daugherty later told The Village Green the board will “by no means compromise the process” by rushing a decision on hiring. She also said she would like to find a way to involve both current and new board members elected in November in the search process.

“Outgoing board members have a lot of insight” from their long experience in the district, she said; for example, Andrea Wren-Hardin had nearly ten years of tenure on the board.

While Daugherty said the reorganized board that is in place as of Jan. 1, 2015 would have the legal hiring authority, she would like to investigate whether both newly elected and outgoing board members could be involved, perhaps in the interviewing process.

“If there’s a way to have twelve people’s input, that would be good,” she said.