South Orange-Maplewood Board of Ed Votes to Use Banked Cap, Save Elementary Positions 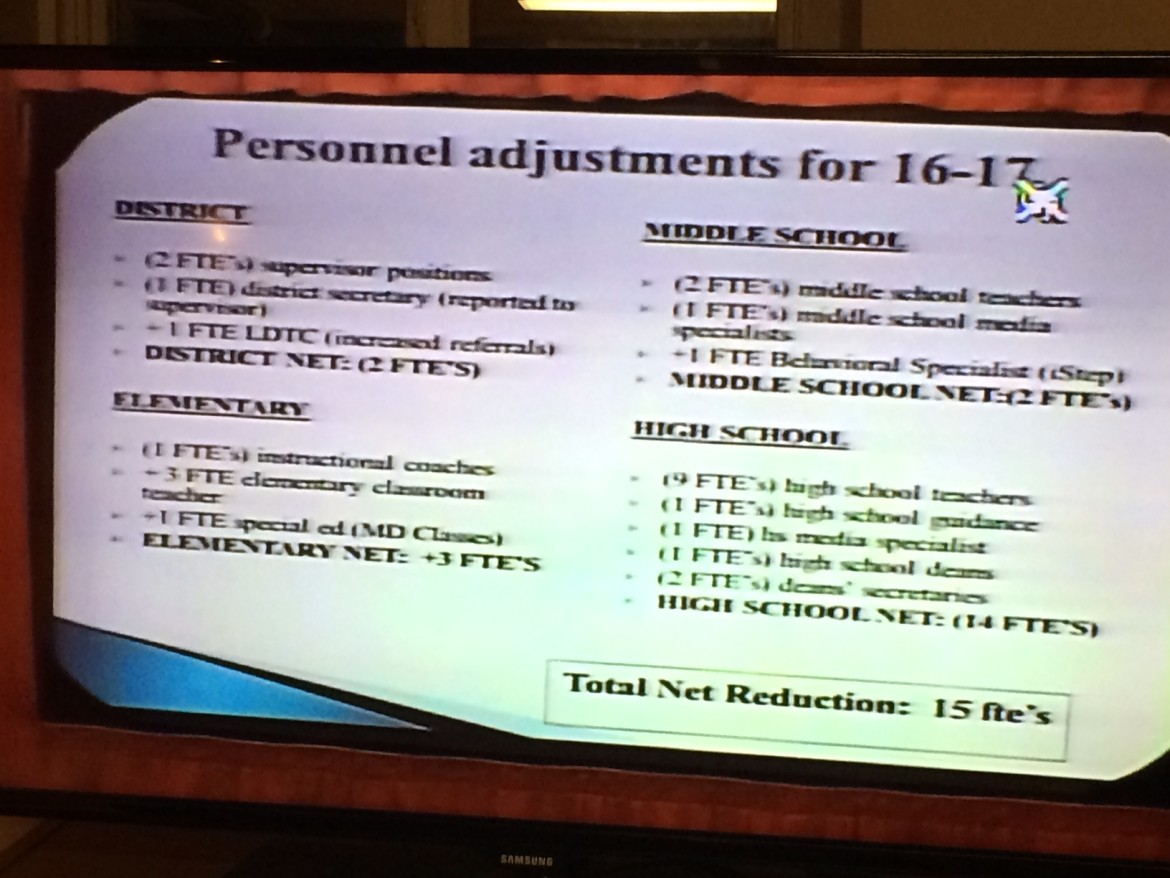 The South Orange-Maplewood Board of Education approved a preliminary budget for the 2016-17 school year on Monday night that would use $409,103 in banked taxing authority to save four positions on the elementary level —  but not two library positions at the secondary level.

The use of the banked cap will raise the tax levy on the school district portion of local taxes by 2.43%. According to District Business Administrator Cheryl Schneider, this translates into an additional $226 per average Maplewood household and an additional $249 in taxes for the average South Orange household (or $15 above the increase allowed by the 2% cap in Maplewood and $18 above the amount allowed by the 2% cap in South Orange).

The cuts are as follows:

Several public speakers expressed concerns about scheduling and academics at the middle schools and high school, while others took to the microphone to say that they supported using the banked cap to avoid cuts at the elementary level.

Donna Upton, co-president of the Seth Boyden PTA, said she wanted to thank the Board of Education for “making hard but necessary choices that will affect all of our schools, and I want to thank other members of our community who are not from Seth Boyden who understand why Seth Boyden is important.” The banked cap will be used to restore two academic intervention specialists to Seth Boyden after they were cut from other elementary schools. Later in the meeting, former Board of Education member Steve Latz asked that the Board clarify if two additional teaching positions would also be dedicated to Seth Boyden School — notwithstanding unforeseen enrollment needs in other elementary schools in the district.

“I heard a significantly different account from Ms. Schneider tonight… than previously,” said Latz. “My understanding of the intent of the $409,000,” said Latz, is that it would be used to restore the intervention specialists to Seth Boyden and add two classroom teachers to Seth Boyden — “absent the need to add a section somewhere else which is not expected.”

When it came time to vote, Board members, starting with President Elizabeth Baker, expressed their struggle with the budget process.

Baker called voting on the budget “a difficult moment” and expressed the belief that the current Strategic Planning process would present an opportunity for the district to reinvent the budget process. Baker also said that the district “must have more funding from State” and said that Maplewood and South Orange must “organize and use our leverage as a community and work with other communities.” She talked about working with NJ State Assembly representatives Mila Jasey and John McKeon, who met with board of education members from the two towns and West Orange as well as elected leaders of the three towns “to discuss a bill they have introduced for interim relief.”

Later, after the votes, Baker asked that those who opposed the cuts now work with the Board of Education to lobby in Trenton for more funding for the district.

“I hope with the strategic direction we can avoid this in future,” said Smith. “I’m voting against there being no other option.”