The U10 Premier team broke up a tight game with five-straight goals in the second half to defeat Secaucus, 5-1, at Borden Park on Sunday. Morgan Druck scored the first two goals of her Cougar career to lead the offensive burst in the second half. Her second goal came thanks to a well-placed throw in by Pacey Lorre that sprang Druck for an open dash to the goal.

Talia Levine assisted on Druck’s first goal and also added a goal of her own.

Cougar SC opened the scoring in the first half when Levine’s sprint up the field drew a penalty the box. Amelia Connolly knocked in the ensuing penalty kick for the first of her two goals.

Goalkeeper Esme Navarro kept the game close in the first half while Eleanor Winkfield posted a shutout in the second half. 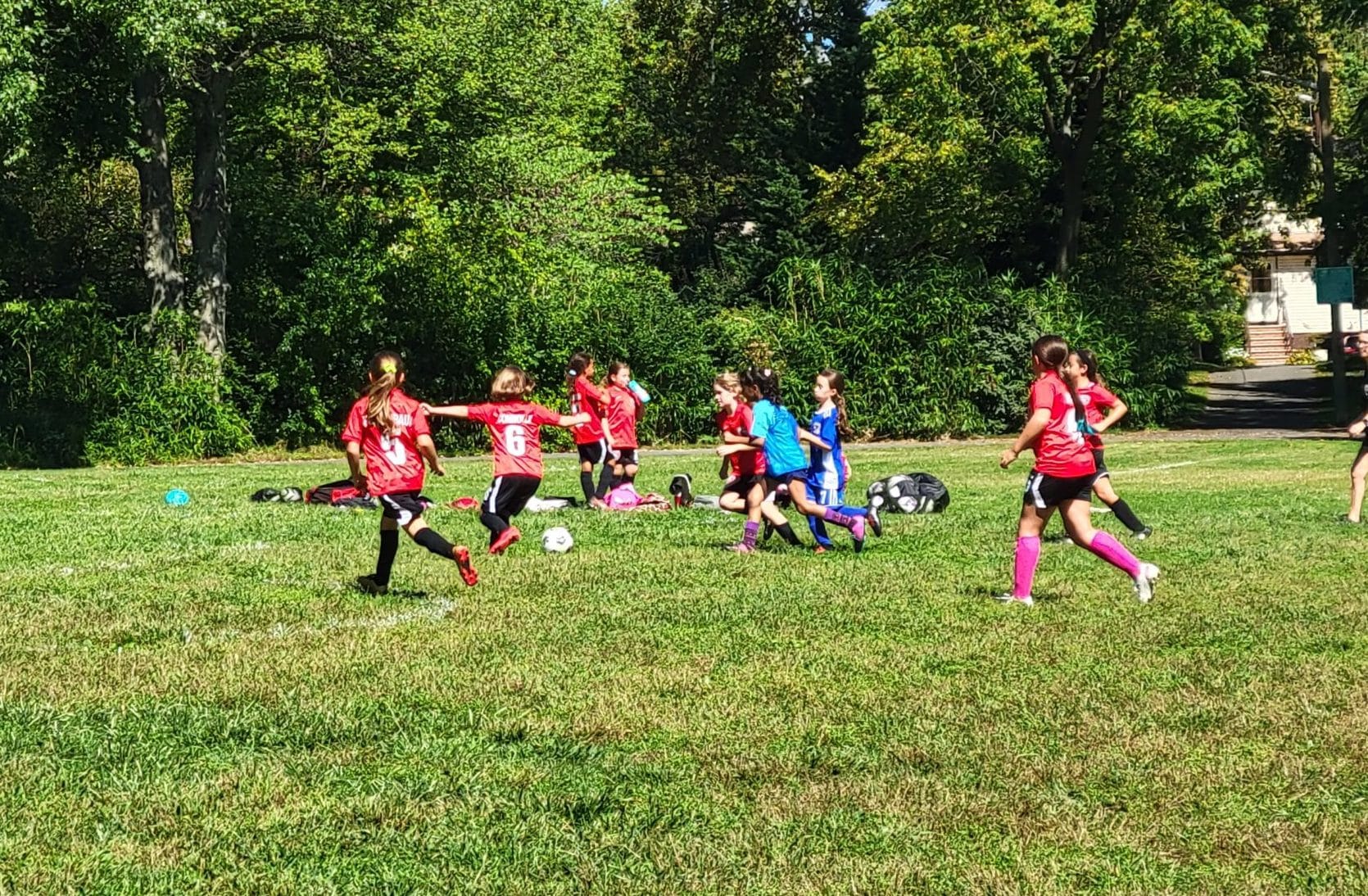 The Girls U9 Pro team opened the season with a six-goal offensive outburst, defeating Verona, 6-1, on Sunday in Verona. 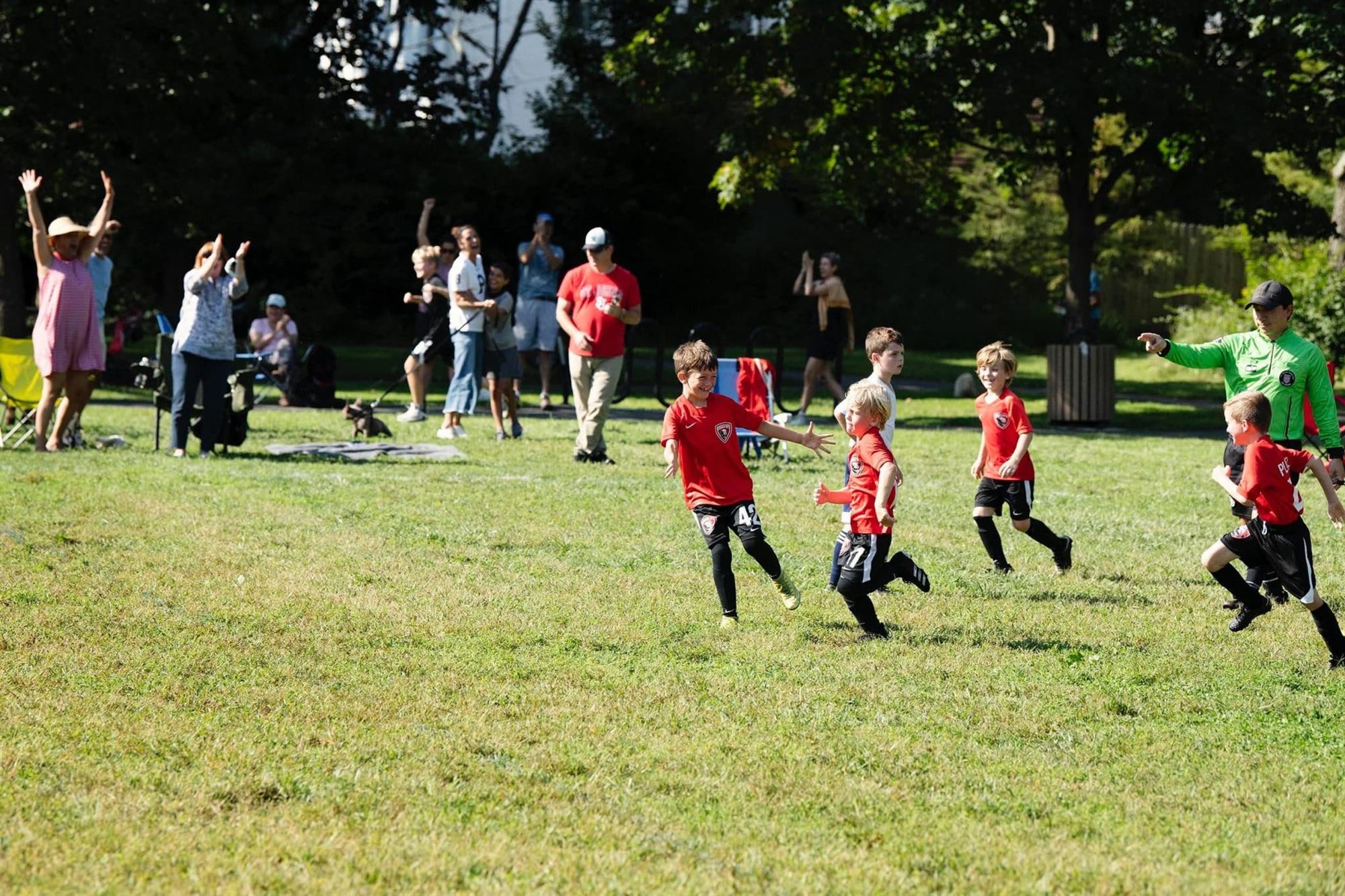 Edison Barkey pounced on a loose ball and blasted a shot into the bottom corner with less than nine minutes left in the game to secure a 1-1 tie with Rutherford on Saturday at Borden Park.

The Boys U9 Elite team gave up an early goal to Rutherford on a penalty kick but then the defense led by Sam Lynch stiffened to shut down Rutherford for the rest of the game. Cougar SC had several chances to score but couldn’t find the back of the net until Barkey’s late heroics.

The Boys U9 Pro team dropped a tight 3-1 match to World Class FC at home on Saturday. The U9 Pro team next travels to Midland Park to face Ajax.

Precision passing by the Boys U10 Premier team allowed Lucas Alvarado to score the winning goal in the second half to defeat Verona, 1-0, at Borden Park on Saturday.

The Boys U10 Pro jumped to the top of the standings with a pair of victories to open the regular season. Center midfielder Alex Burrell led Cougar SC with a natural hat trick to defeat Seacacus, 4-0. Hudson Miele finished off the scoring.

Cougar SC faced adversity in its second match of the weekend, falling behind 1-0 to Cougars United in Cresskill. Henry Meagher evened the score just before halftime and then Cougar SC took over in the second half.

Matai Zorel stripped the ball from Cougars United and made a perfect pass to Miele who chipped the ball over the head of the goalkeeper for a 2-1 lead. Miele gave Cougar SC some breathing room with a free kick blast from outside the box to push the lead to 3-1. An own goal by Cougars United closed out the scoring, 4-1.

The Girls U11 Premier team continued its strong defensive performance to open the season, yielding just one goal in a loss to Verona on Saturday in Verona. Girls U11 Premier next travels to Woodcliff Lake to face Arsenal on September 25.

The Boys U11 Pro team opened the season with a strong offensive performance, defeating Tenafly, 7-3, on Saturday at DeHart Park. Cougar SC opened up a 4-0 lead and cruised to victory. Sean Hermes had a hat trick for Cougar SC.

U11 Pro next hits the road to face Maroons on September 25 in Ridgewood.

Bobby Murphy scored the first goal of his Cougar travel career and followed it up with a second goal as the Boys U11 Premier team rallied to defeat Glen Ridge, 6-1, on Saturday in Glen Ridge.

Cougar SC fell behind early as Glen Ridge scored on a corner kick before Cooper Schwartz scored two goals to give Cougar SC a lead it would never relinquish. Both goals came on assists from Gilmore Morales who combined with Murphy to control the midfield throughout the match.

The Boys U11  Premier team fell 4-2 to Maroons at home on Saturday. The U11 Premier team opens its home schedule against New Milford at DeHart on September 25.

The Girls U12 Premier team picked up a tie against Aviators on Sunday at DeHart Park. The U12 Premier team will host a pair of games on September 25 and 26 at DeHart. Cougar SC will face Wayne Boys and Girls Club on Saturday and World Class FC on Sunday.

The Boys U12 Premier team dropped a tight 2-1 match to Dragons on Saturday at DeHart Park. U12 Premier next travels to Glen Ridge on September 25.

The Girls U13 Premier team jumped out to a three-goal lead and cruised to a 4-1 victory over Dumont on Sunday at Orange Park.

Olivia Roskin blasted a shot into the top right corner off a corner kick to give Cougar SC a lead it would never relinquish. Annabel Doyle, playing up from the U12 girls team, tenaciously fought through the Dumont defense to make it 2-0. Just before halftime, Sienna Parker intercepted a Dumont goal kick at the top of the penalty box and scored into the lower-right corner for a 3-0 halftime lead.

The teams traded goals in the second half as Dumont scored on a free kick but the Cougar SC defense clamped down to preserve the regular season win. Other than the free kick goal, Jojo Yarde was unbeatable in goal. Strong defensive play by Shayna Campbell, Sahana Lynch, Amelia Stetson and Kama Westhelle ensured a comfortable win to start the season.

The team had a scary movement when Scarlett Cohen was injured at the end of a strong shift but the team hopes she recovers quickly.

The strong Cougar SC defense posted its third shutout of the fall season, shutting down ASYO Bergen in the conference opener on Sunday at Orange Park. Sophia Islam and Vivian Lawrence led the defense that has given up more than one goal only once in five games.

Midfielder Celia Mann earned player of the match honors for scoring the only Cougar goal of the game in the first half.

The Girls U14 Premier team (1-0) continues its Northern Counties regular season with a home game against Glen Rock at 4 p.m. on September 26.

The Boys U14 Premier team opened the defense of its spring flight championship with a 4-2 victory over the Waldrick Warriors on Saturday at DeHart Park.

The back-and-forth match featured two ties before Cougar SC pulled away in the second half.

Henry Short opened the scoring off a corner kick before the Warriors answered to tie the game. Theo Sigalos sent Cougar SC into halftime with a 2-1 lead with a low shot the corner. The Warriors, however, tied the game again at two early in the second half.

Moments later Cormac Sullivan put Cougar SC back on top, 3-2, before Sigalos clinched the win with his second goal of the game.

The Boys U14 Premier team next travels to Verona on Oct. 2.