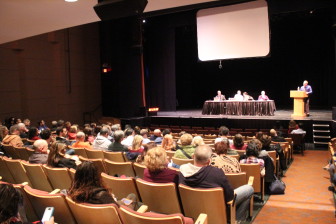 James Goodger of the South Mountain YMCA presents a proposal for the use of the former JAC shelter building.

But many had already made up their minds about which tenant they wanted to see in the space.

That was Run Jump Lift, a fitness facility operating in South Orange since 2007 — and with a temporary lease of the JAC space since the spring.

After representatives from Wagmore Inn, the South Mountain YMCA, Run Jump Lift and People for Animals had their say, audience members took to the microphone at the public forum held at the South Orange Performing Arts Center. By Village Green’s count, 21 spoke on behalf of awarding the lease for the facility to Run Jump Lift, 10 spoke in favor of People for Animals, and three chose the YMCA as a second choice. No one spoke in favor of Wagmore Inn.

Maplewood resident Claire Roberts started off the comments by noting the expense of Maplewood’s contract with St. Hubert’s shelter in Madison — in excess of $70,000 year. Roberts said that although Run Jump Lift would pay about $72,000 in rent for its first year, Maplewood had also contributed $165,000 to building the JAC when it was constructed 13 years ago. “You will have to pay back Maplewood if you don’t go with People for Animals,” said Roberts.

Roberts was then followed by many local residents who advocated for Run Jump Lift, noting that owner Malcolm Chisholm was a local resident and small business owner who was a “part of the community” and that Chisholm had a unique presence that went well beyond caring about members’ fitness. Residents also felt that Run Jump Lift was a “good neighbor” that did not add traffic, noise, rodents or dirt to the area — all problems experienced with the JAC when it was running a shelter in the location.

While three speakers said they would support the South Mountain YMCA as a second choice (the Y proposed a 35-child after-care program on the site and a summer camp), Jason Carter of South Orange said he was concerned about traffic problems involving drop-off and pickup should the YMCA be awarded the lease.

Other neighbors said that while the program presented by People for Animals was admirable and necessary, 298 Walton was not the right location.

“I lived through 10 years of hell [with the JAC],” said one neighbor, citing rodents, noise and abandoned animals left overnight. With PFA or Wagmore, she said, “There will be barking. Malcolm has been a great neighbor. I’m supporting Run Jump Lift.”

Virginia Canino said that she helped save more than 100 animals by finding them homes when the JAC was forced to close. “I understand that a shelter is not what is offered,” said Canino, “but I understand compromise and I believe there is a sense of fairness to allow a wonderful organization like PFA … with the solution to fulfill this wish” [of providing temporary shelter services].

Leslie Gilman of Maplewood also reminded attendees that 600 local residents had signed a petition asking for a new shelter or, secondarily, supporting the PFA bid for the lease.

“I don’t think the [financial] impact is understood,” said Gilman, who also said that the services of the PFA were much more far reaching for the community: “There are perhaps 200 members of a gym. The PFA is much more inclusive for the town and for the taxpayers.”

A former JAC volunteer said that the sins of the JAC should not be visited upon the PFA: “PFA will be a very, very different organization and will make sure all the noise and hygiene problems will not be there. The bottom line is every town must have a solution for animal control. That’s the law. Maplewood is paying a lot for St. Hubert’s would I like to see that reduced and a solution for both towns.”

But a neighbor living across the street from the facility was unconvinced: “I’m a life-long dog owner. Never in my experience have I taken my dogs for these services [day care and spaying/neutering] in a residential neighborhood…. No matter how much buffering, dogs need to get outside.” She added, “What a relief the last six months have been for the neighborhood [with Run Jump Lift].”

A Lenox Avenue resident said she was “so happy to see [Malcolm Chisholm’s] commitment to middle schoolers and high schoolers.”

But yet another local resident cited the good work performed by Jane Guillaume and PFA in administering South Orange’s Trap Neuter Vaccinate Return program for feral cats: “Jane Guillaume of PFA is the reason I’m here. She’s been good to this community. She is well respected here.”

Richard Bell of the Farrell Field Park Conservancy presented a new petition, signed by 207 near neighbors of the JAC, endorsing Run Jump Lift as a first option and the YMCA as a second option.  “I have a rescue dog myself,” said Bell, but “from the day the shelter was built 13 years ago, it was a great idea but put in the wrong location.”

Village President Sheena Collum concluded the meeting by noting that Run Jump Lift’s current status as the temporary occupant would not be a consideration in the decision of the governing body.

Collum also directed some comments to PFA and shelter supporters, saying that the Township had “a backup plan for animal services” should the lease not be awarded to People for Animals.

“We do have options,” said Collum, who specifically thanked Jane Guillaume and PFA for their work administering the TNVR program.

“South Orange does not have best history with taking care of animals,” said Collum, but with PFA and the TNVR program, she said the Township was “seeing a reduction in the number of cats.”

Collum encouraged residents to continue to contact her and Village Trustees and administration with feedback on the proposals up until the Dec. 12 Board of Trustees meeting “when the decision will be made.” She also noted, “We have our professionals evaluating everything including the parking.”

Video of the meeting can be found at southorange.org.