In the weeks since the murder of George Floyd while in police custody in Minneapolis, Minnesota, cities and towns around the country are having conversations about defunding their police departments.

The conversation is now hitting home, as two South Orange residents — both Columbia High School students — asked the South Orange Board of Trustees about the redistribution of South Orange Police Department funds at the June 8 BOT meeting.

“Considering South Orange is projected to spend $2,500,000 on the South Orange Police Building and more money is spent on ‘public safety’ than any other public amenity, where is that money specifically going and would you considering looking into redirecting these funds to other resources like healthcare and social services as activists around the country are calling to defund the police?” wrote Olivia Brash in a public comment read aloud in the virtual BOT meeting by Village Clerk Kevin Harris.

“This weekend we students and community members marched in solidarity with protestors fighting against an unjust system. And we thank you for supporting us. We marched to expose the contraction in our town and of the policing system as a whole that was since the beginning created and maintained to oppress Black people. The system is inherently unjust and when something’s foundation is rotten, especially when it is rotten with racism, must we not take it down and reconstruct? Considering Minneapolis’ recent announcement of their intent to disband the police department, have you considered the possibility of disbanding the South Orange Police Department?”

Village President Sheena Collum responded to the comments, noting that the largest budgetary expenditure, by far, was for public safety. (According to the 2020 South Orange budget presentation, 40% of the municipal budget goes to Public Safety, or police and fire.) She added, “There are a lot of capital investments, like the update to police headquarters.” 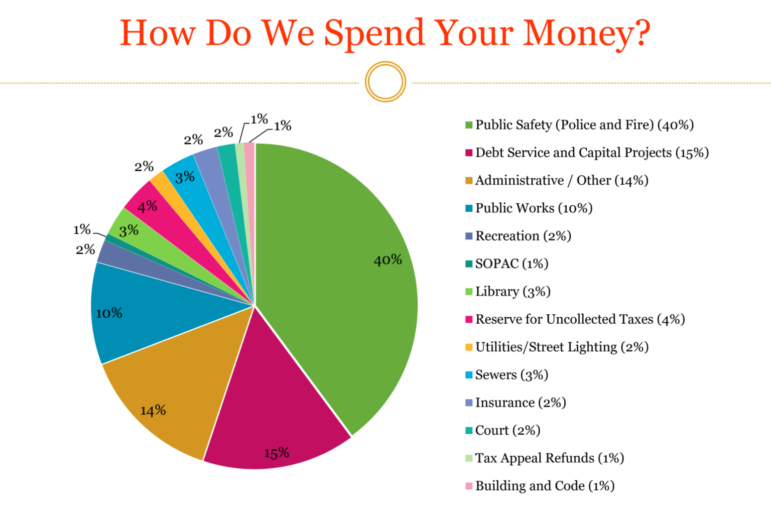 From the South Orange 2020 Budget Presentation

Collum explained that budget allocations for the departments are based on recommendations.

“Everyone on this board is always looking to optimize our services,” she assured Brash, citing the proposed merger with the Maplewood Fire Department, which has been delayed due to COVID-19. “We hear you, we understand, and we’ll continue working with the community on what we do.”

In response to Muhammad’s comment, Collum stated that there have not yet been conversations on future funding for the police department coming out of the national conversation on policing in light of Floyd’s death. She highlighted the Community Police Collaborative, which was created to discuss policing in the twenty-first century, including police funding.

The CPC meets this Thursday, June 11 via Webex. Information can be found on South Orange Township’s calendar here.

Meanwhile, Police Chief Kyle Kroll has voiced his strong support for Black Lives Matter in a letter to the community on May 30. Kroll wrote in part, “I watched the video footage of George Floyd being murdered at the hands of law enforcement. It was appalling, unnecessary, inhumane, tragic, and unacceptable. … I commit to you that in our community, we are listening and working every day to do better and involve those we serve in helping us become stronger, both as a police department and a community.” Kroll belongs to the Superior Officers Association union which has agreed to the 2% salary freeze.

At the June 8 meeting, Collum said there was a “dichotomy of messages from the [NJ FMBA and PBA] unions versus residents.”

“Recognizing systematic racism in policing is something we are open to,” Collum said. She also expressed the Board’s interest in exploring different avenues, including the role of social workers in policing, addressing homelessness and  domestic violence. “There’s a lot of models we can look at for building bridges between the community and the police.”