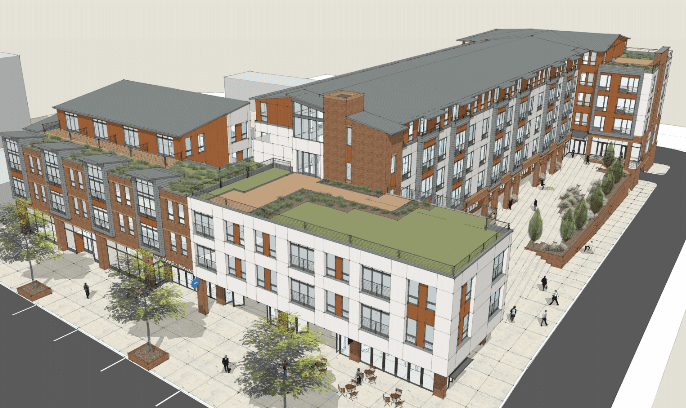 Public forums for development projects don’t often go like this.

“This is the ideal of what a public process should be like,” said Academy Heights neighbor Andrew Kitt at a public forum discussing changes to a proposed 106-unit development on the Southwest corner of 4th and Valley in South Orange on Wednesday night. “I could not be more satisfied with the outcome.”

Kitt’s comment came at the end of the meeting and after more than two dozen meetings over two years in which Village officials and neighbors worked with Meridia Capodagli Property, the proposed redeveloper, to shape the project into something that residents felt improved the area and dealt with or acknowledged potential issues regarding parking and traffic.

Residents said they were very happy with changes made by architect James Haley of Haley Donovan, breaking up the facades, setbacks and heights of the building to make it look more varied and organic to the neighborhood. The new iteration of the building also provided more public space that could be enjoyed by neighbors — something residents said was sorely missing at the Third & Valley development.

(See the Village Planner’s and the architect’s presentations below.)

In addition, the 4th & Valley proposal now features extra wide sidewalks (20′) — generating more public space initially and potentially allowing for the addition of another lane to Valley Street should traffic studies call for a turning lane or other improvement.

While those in attendance seemed delighted with the project, there were questions and concerns about the broader implications of development on Valley Street.

“I love the redesign,” said resident and member of the South Orange Zoning Board of Adjustment Michael Parlapiano. “But what if this is replicated all down Valley?”

“Every project needs to be looked at individually,” said Village President Sheena Collum, who noted that the South Orange Master Plan, performed in 1978, needed to be updated and that a new planning process would kick off in 2017. Collum assured attendees that such dense projects would not be viable further down Valley Street due to parking issues as well as the growing distance from the train station.

“One-off approval makes me nervous,” said Parlapiano. “I wish I knew what we were doing with all of Valley first.”

“The money matters. We should talk about that,” said Parlapiano.

“Michael, you are speaking my language,” said Collum, who then explained that “there is no such things as tax giveaways” with such projects. “We have a financial analyst going through the pro forma. If a tax abatement is not warranted, they will not get it,” said Collum who pointed out that the Villas at Orange Lawn did not receive an abatement and that 4th & Valley would only be eligible for an abatement for a maximum of five years.

Collum also noted that, going by numbers from other similar projects in town, the development should only generate three school-age children and they most likely would be coming from shared households in town where parents had divorced.

Another topic of discussion was the need for a traffic study for Valley Street. Village Planner Phil Abramson said that the idea was an “ongoing conversation” and that as a daily commuter to town he “knows how painful and frustrating Valley Street can be.” He called the street “under-studied” and the problems “fixable.” Abramson said that the Village would “work with the redeveloper to require them to go beyond a typical traffic study and contribute to a plan for the corridor.”

Collum also talked about requiring the 10,000 sf of retail space in the new development. “We are working closely with the developer on retail attraction,” said Collum, stressing that the area needed an anchor, much like Above and Ashley Marketplace had brought an anchor to South Orange Avenue. Collum envisioned a large destination restaurant at 4th & Valley.

One member of the public called Third & Valley a “failed” project for its density and lack of public space. Collum, who was not a part of negotiations for that project, nonetheless said she was not going to “throw anyone under the bus.” She credited the town for working out a deal with Jonathan Rose LLC that brought a commuter parking garage to town as well as a $1.2 million contribution to rebuild the South Orange Rescue Squad. Calling it a “very complex negotiation,” Collum said, “We didn’t have as much leverage then as we have now.”

Collum said that active negotiations were ongoing with Meridia over parking ratios (there are 123 underground spaces proposed on the 4th & Valley site, but more parking would need to be obtained for visitors and workers), details of the financial deal and neighborhood improvements.

Collum said the Village hoped to re-introduce the redevelopment plan and agreements in January at a Board of Trustees meeting. Collum noted that the process was a lengthy one beyond that introduction: The redevelopment plan would then be referred to the Planning Board for approval, then back to the Board of Trustees for a hearing and a vote. Following that, Meridia would need to deliver a site plan to the Planning Board for approval.

“Third & Valley did not have the robust public process this has had,” said Collum. “Credit the neighborhood for mobilizing.”