From Durand-Hedden House in Maplewood:

As the City of Newark prepares to celebrate its 350th anniversary in 2016, join Durand-Hedden on Sunday, November 15, for Newark through the Ages, a presentation prepared by Elizabeth Del Tufo, President of the Newark Preservation and Landmarks Committee and one of Newark’s best-known civic activists and ambassadors.

Newark is our nation’s third oldest major city and much of America’s history can be seen in its buildings, streets, and parks. Liz will tell the successive stories of Newark’s life – “The Founding Years,” “The Industrial Years,” “Its Role as a Center of Commerce,” “The City Beautiful Movement,” “The Depression and the WPA,” “Post-World War II,” “The Unrest of the 60’s,” to the present and its promising future as it readies itself to be a destination city. She will introduce landmarks which in turn illustrate each period ranging from Old First Church, Washington Park, The Ballantine House, Branch Brook Park, Forest Hill, The Rock, Penn Station, Terminal One, James St. Commons, NJPAC, and the new Pru Tower. There are 75 buildings on the NJ State and National Registers and six historic districts in Newark as well as abundant new development and adaptive reuse. Come and be surprised.

The presentation will begin at 2 p.m. on Sunday,, November 15. From 1:00 – 4:00 p.m., be sure to stroll through the Maplewood Garden Club Herb Garden full to the brim with fascinating useful and decorative herbs, before it goes to bed for the winter. And check out the Country Store’s historic- themed treasures: early American games, books and toys, facsimile documents, quill pens and ink, historic cook books, cookie molds, tin lanterns, reproductive decorative items and ceramics, and more, such as the hard-to-find original Doors of Maplewood poster, Smile: A Pictorial History of Olympic Park, 1887-1965 and the new acid-free reproduction of the charming 1931 Map of Maplewood.

Durand-Hedden House is dedicated to telling the history of the development of Maplewood and the surrounding area in new and engaging ways. It is located in Grasmere Park at 523 Ridgewood Road in Maplewood. For more information or to arrange group tours call 973-763-7712. You can also visit our website at durandhedden.org and find us on Facebook and Twitter. 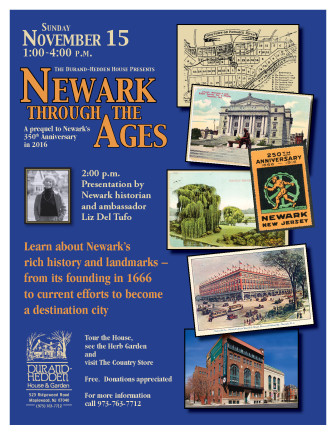