Maplewood Mandala Project — How and Why?

Beginning Monday, August 10 through Saturday, August 15, 2015, five Buddhist monks from the Drepung Loseling Monastery will be in residence in Maplewood to create a mandala sand art inside the Great Hall at The Woodland. Maplewood Cultural Affairs Coordinator Andrew Fishman explains it all for you.

In most cases it would seem an odd choice for a town’s Recreation and Cultural Affairs Department to engage a group of devout Buddhist monks from India to spend a week creating a mystical image made entirely of colored sand. Maplewood, however, is no ordinary town. 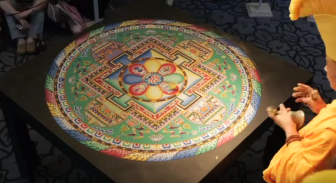 The idea for Mandala Project began as seed planted by local artists Mikel Frank (lost to North Carolina but here in sprit) and Gerard Ansellem. Inspired by the physical space of the Great Hall at the Woodland, they envisioned it as a venue for a high concept, site specific performance and exhibition work! Not only would it make creative use of a unique, publicly owned building, but it would also appeal to the sensibilities of this diverse and eclectic Jersey oasis that is Maplewood and South Orange.

The seed they planted took root several weeks later while I was watching the Netflix series House of Cards. One particular episode prominently featured the monks of the Drepung Loseling Monastery hard at work on a sand mandala in no less a stately location than the fictional White House. It was not the first time I’d seen them though. For the better part of two decades, I have attended a conference for the touring arts and entertainment industry held annually in New York. Each year, amid the noise and chaos of the convention floor, were the monks quietly at their task.

I reached out to the Atlanta based Mystical Arts of Tibet organization, put together a proposal and on April 15, sent it to Township officials in an email that began, “I guarantee this will be one of the stranger emails you get today.” This missive started the process that will culminate next week with the arrival of our guests from the east.

As originally conceived, The Maplewood Mandala Project was intended to serve as a showcase for the Woodland, that majestic and mysterious building located at 60 Woodland Road. While it promises to be a rich and exciting experience for the community, it also illustrates just one way in which a conventionally used space can be put to unconventional use.

The Woodland is a blank canvas located in the heart of a community flush with artists and untapped creative energy. As you gaze at the mesmerizing work of the Drepung Loseling monks, take a moment to look up and wonder what lies ahead for this remarkable venue.

As a longtime Maplewood resident, Andrew Fishman brings some local DNA to the position of Cultural Affairs Coordinator. One of his primary goals is to promote creative use of the Woodland and other publicly owned facilities.