The Columbia High School Parnassian Society’s production of Peter Shaffer’s Equus ran for four performances the weekend prior to Thanksgiving to audience acclaim. Equus, a 1973 play by British playwright Peter Shaffer is a type of a mystery play — not a whodunnit, but a “whydunnit.”

Psychiatrist Martin Dysart (played by CHS senior Cyrus Shields) investigates the savage blinding of six horses with a metal spike in a stable in Hampshire, England. We know the atrocity was committed by an unassuming 17-year-old stable boy named Alan Strang (portrayed by CHS senior Dylan Boyd), the only son of an opinionated but inwardly-timid father (played by Aidan Conway) and a genteel, religious mother (Madison McGehee). But why did the boy do this terrible crime? As Dysart exposes the truths behind the boy’s demons, he finds himself face-to-face with his own. 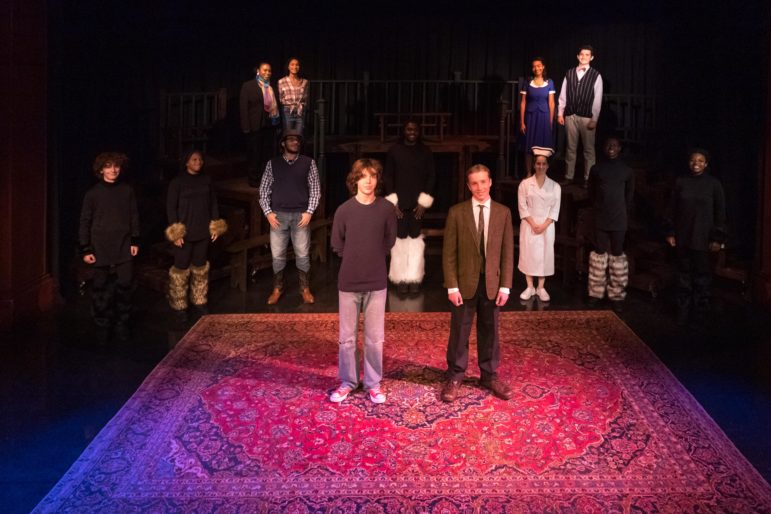 Cyrus Shields, as Dysart, carried the plot powerfully, delving deeply into an analysis of the boy, Alan Strang, to attempt to return him to a “normal life” — to heal him. The magistrate, Hester, played deftly by senior Racquel Anicette, convincingly urges Dysart to take the case. Sophomore Sabrina Mannion played Jill, the seventeen year-old girl who introduces Strang to the stable and gets him hired. William Nash performed the role of Nugget, Strang’s favorite horse in the stable. The ensemble portrayed the five other horses (Emily Donoghue, Melissa Dubuisson, Davis Favors, Justice Muhammad and Hayden Groner) were costumed with the same horse heads used in the 2007 Broadway revival starring Daniel Radcliffe.