written by Donny Levit May 13, 2021
0 FacebookTwitterPinterestEmail

In the grand scheme of things, it’s a miniscule group.

An assortment of ultra-conservative Catholic protesters has called for the shutdown of Seton Hall University’s WSOU (89.5 FM), a radio station that has been a bastion of heavy metal music since its “hard rock format” began in 1986. According to the protesters, the station promotes “Satanism, political violence, anti-Christian hatred, and the occult.”

As reported by the Setonian – SHU’s student-run newspaper – the groups have staged multiple protests this spring as well as last fall, calling for the end to “satanic” heavy metal played on WSOU. On their Shut Down WSOU website, the group leads with: “We’re here to end the Satanic, anti-Christian and violently obscene broadcasting coming from Seton Hall University’s radio station, WSOU.”

Describing its focus as “an organization of lay Catholic Americans concerned about the moral crisis shaking the remnants of Christian civilization,” the American Society for the Defense of Tradition, Family and Property (TFP) has been actively involved in the attempted shutdown of WSOU. The Southern Poverty Law Center called the group “virulently anti-LGBT.” TFP is working with another organization called The Lepanto Institute. Their website describes itself as being “dedicated to the defense of the Catholic Church against assaults from without as well as from within.” 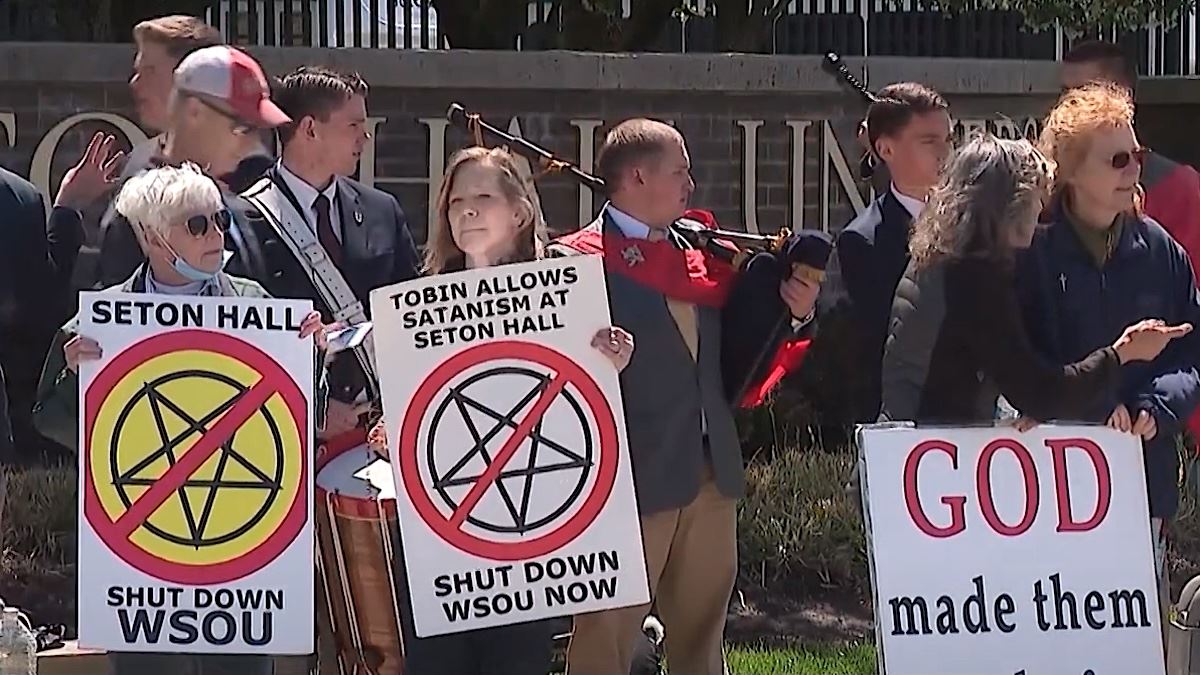 Protesters outside of Seton Hall University. (Screenshot via News12/YouTube)

“For more than seven decades, student-run WSOU has been home to a rich range of music, news, sports, academic, community service and faith-based programming, winning many awards for excellence and preparing hundreds of students for successful media careers,” wrote University spokesperson Laurie Pine, in response to an inquiry by the Village Green.  “WSOU’s advisory board comprised of WSOU students and alumni along with Seton Hall University clergy and administrators, meets regularly to review the station’s content and operating policies and standards. The goal is to ensure that WSOU continues to realize its mission as a vital asset to the both the campus community and its many loyal listeners locally and throughout the nation. Incorporating and integrating Catholic mission and ministry into WSOU’s wide-ranging and popular programming is always a priority.”

Read about the most recent WSOU Hall of Fame honorees.

The Principles That Guide WSOU Programming are posted on their website, and specifically address the nature of WSOU’s music selections: “Our guidelines are also informed by experience and the knowledge that to those unaccustomed to loud rock formats, WSOU’s music might sound scary and that the very nature of hard rock music might strike some as anti-religious. In fact, all songs on WSOU are screened for content to ensure that lyrics do not undermine the mission and values of Seton Hall University or the Catholic Church.”

In addition to placing blame on WSOU and the university, the Setonian reported that some fliers held during the protest “blamed WSOU’s broadcasting on former Archbishop of Newark Theodore McCarrick, who was defrocked by Pope Francis in 2019 after the Church found him guilty of sexual abuse.”

To put the recent protests outside of Seton Hall, it helps to revisit the historical context of those seeking to censor “heavy metal,” “loud rock” and other musical selections played on WSOU. 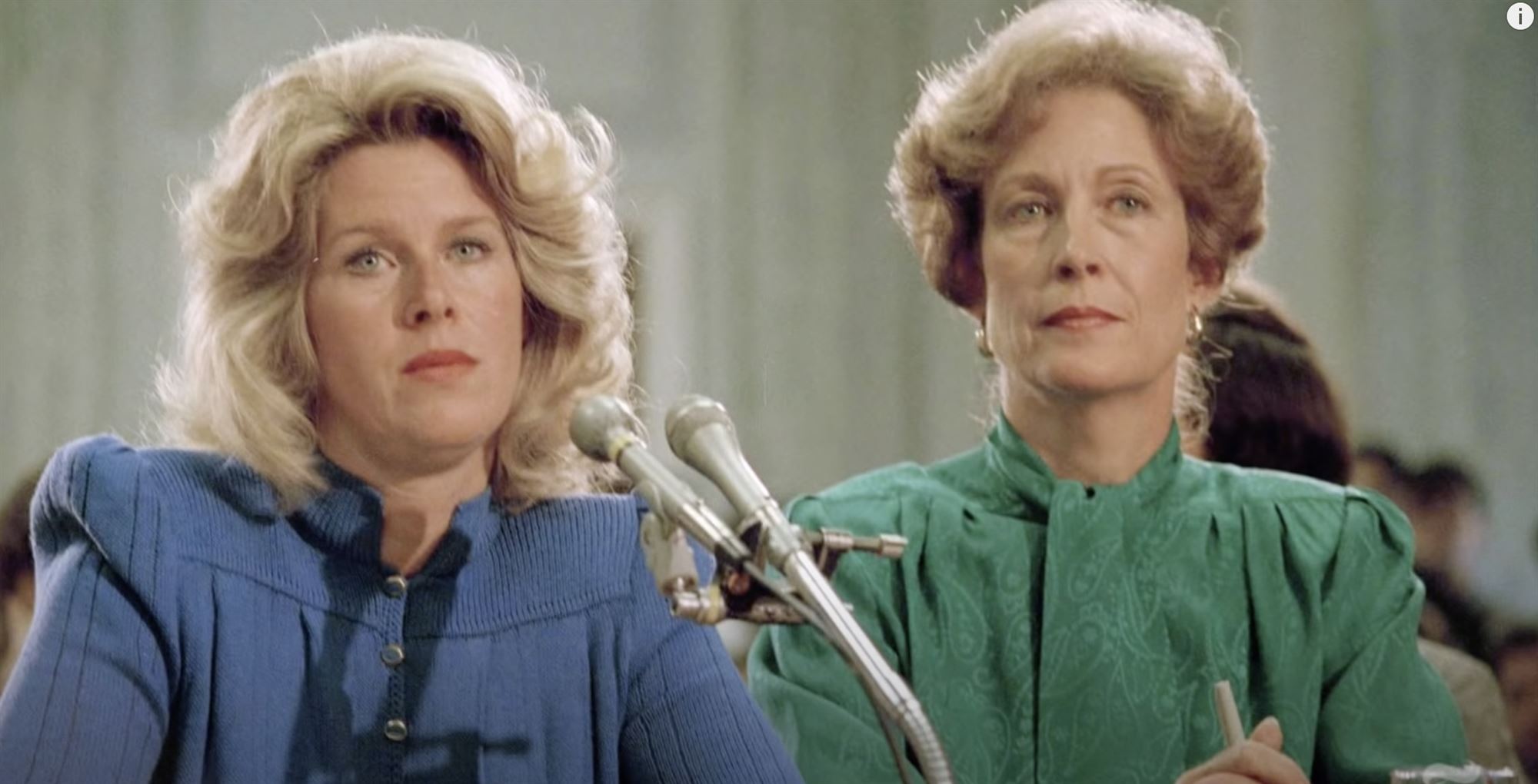 In 1985, Tipper Gore (a future Second Lady of the U.S. who was then married to Senator Al Gore) helped form the Parents Music Resource Center (PMRC), a committee assembled to protect young listeners from hearing music lyrics which they deemed to be violent, sexual, or otherwise offensive.

The committee released a list of songs they found most repulsive and shocking. Dubbed the “Filthy Fifteen,” tracks by Prince, Madonna, Sheena Easton, and Cyndi Lauper made the cut due to their sexual content. Other songs by Twisted Sister, Judas Priest, and Black Sabbath were labeled as being rife with alcohol, drugs, and violence. The bands Venom and Mercyful Fate – certainly the least known of the fifteen — made the list for “fostering an unhealthy interest in the occult.”

On September 19, 1985, the Senate Committee on Commerce, Science, and Transportation held a hearing on the Contents of Music and the Lyrics of Records. Tipper Gore went head-to-head over music censorship against the very strange bedfellows of Frank Zappa, Twisted Sister front man Dee Snider, and John Denver. As a result, the Recording Industry Association of American agreed to put “Parental Guidance: Explicit Lyrics” on music packaging and do so at their own discretion. The PMRC would eventually shut down in the 90s, but debates over music censorship are alive and well.

The PMRC may also serve as a cultural bellwether for the timeframe as conspiratorial fears of organized or global Satanic cults began to take shape, referred to as a “satanic panic.” Aja Romano of Vox offers a compelling argument that “the collective fears that consumed the US in the 1980s and ’90s are still alive and well — all the way through QAnon and beyond.”

“Satanic Panic was characterized at its peak by fearful media depictions of godless teenagers and the deviant music and media they consumed. This, in turn, led to a number of high-profile criminal cases that were heavily influenced by all the social hysteria. Most people associate the Satanic Panic with so-called “satanic ritual abuse,” a rash of false allegations made against day care centers in the ’80s, and with the case of the West Memphis Three in the ’90s, in which three teenagers whose wrongful conviction on homicide charges was based on little more than suspicion over their goth lifestyles.” – Aja Romano

“You can’t understate how important WSOU was for underground heavy metal in the late 80s and 90s,” says Maplewood resident Mark Strigl, host of the @talkingmetal podcast for over fifteen years. When Strigl started his show, podcasting was in its nascent stages. He continued to expand his music media experience after working at both MTV and VH1. And over the years, he has hosted many of the heavy metal performers that WSOU has played.

Keep in mind that the station and the university haven’t always shared a tranquil relationship. In 2001, the station was threatened with a format change by SHU that would end heavy metal completely. Eventually, a deal was struck and the station would play what was called “modern eclectic rock” — heavy metal included. That said, WSOU has always been known for spinning up-and-coming bands that would later make it big, such as Pearl Jam, Smashing Pumpkins, Korn, and Newark’s own My Chemical Romance.

In his many years of interviewing heavy metal and hard rock artists, Strigl points out that he has interviewed musicians who have a variety of styles, philosophies, artistic approaches, and religious persuasions. “Heavy metal is a genre, and the bands are very diverse in their beliefs. A lot of these people are Christians. They are Catholics and they’re Jewish, they’re atheist, and they’re Muslims. You could say politically and ethnically diverse, too” he says. “I think WSOU has always had some respect for the institution they come from […] I think this group that’s protesting sounds like they’re, completely lost, misled, and probably don’t even know what they’re protesting.”

At a recent protest, signs asked for passers-by to “honk to protect our children” for fear that the songs could persuade them to engage in anti-Catholic and satanic rituals. In an interview with News 12, Shutdown WSOU founder Richard Smaglick said that, “It’s so bad that this Catholic university is airing Satanism to what they call a target audience of 12-year-olds in the largest media market in North America and that needs to end.”

“Look, here we are more than 30 years later and they’re trying to go after a Catholic institution for playing a form of music that that really is not as dangerous as it once was viewed,” says Strigl. “My kids hear heavy metal and they laugh because it’s old people music.”

So when it comes to purported “satanic music,” is there any that a listener truly should be scared about? Culture writer and journalist AJ Romano certainly thinks so. “The real fear is that, tomorrow, someone could decide the demonic influence is you.”