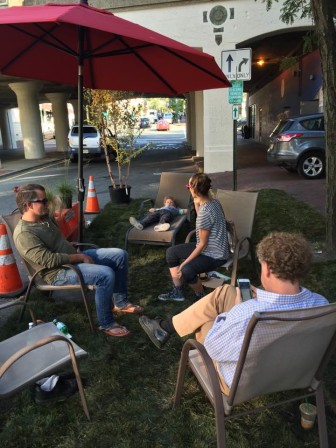 In 2005, a clever idea was launched in San Francisco — PARKing Day, an annual event in which metered parking spaces are transformed into public park land for just one day.

It’s an idea that has been embraced by big cities the world over and organized by artists, designers and planners in conjunction with city governments, parking authorities and the like.

According to South Orange’s Neil Chambers, it’s a day when “regular folks come together to show how little actions can have big impacts on our daily life.”

Now, South Orange has taken its place alongside San Francisco, New York, Paris and the like with its own PARKing Day transformation. The South Orange Environmental Commission (with Trustee liaison Walter Clarke) along with Chambers Design and Tito’s Burritos partnered to pull it all off.

On Friday, September 16, two parking spaces in front of Tito’s Burritos on South Orange Ave were “beautifully reimagined as a park for several hours,” reported Chambers, who is a designer and a member of SOEC. The simple and elegant design included real sod, chairs and umbrellas — all of which quickly attracted loungers.

“It’s really exciting to have the chance to create a gathering spot in a part of South Orange that would really benefit from a little green space. It’s also really exciting to transform an area that’s usually super car-centric into outdoor space for people,” wrote Chambers in a blog post.

“It was a cool space and fun ‘grassroots’ way to connect folks in our community,” wrote Sara Clarke on Facebook.