If Springfield Avenue isn’t your favorite spot to shop for home décor, it will be soon. Along with longtime anchors like Ricciardi Bros Paints, Ricciardi Bros Design Studio, Sherwin-Williams and Tile Design Inspiration, the block now features a few new instant favorites, like Avian & John.

Albert Joseph Gallery opened at 1988 Springfield just over a year ago. 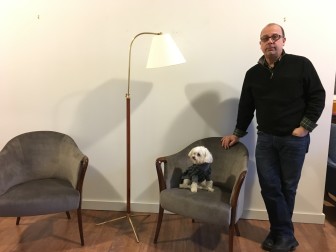 “I live in town and passed this building for a long time,” says owner Joseph. With a showroom in New York City and a warehouse in Maplewood, the 1988 building seemed perfect for him to put additional pieces for sale. First, however, the building needed to be gutted and cleaned up. After removing a few layers, he was able to restore the original floors and even found a beautiful tin ceiling. It’s a lovely backdrop for his antiques, ranging from one-of-a-kind found objects-come-artwork to more prosaic items like chairs.

“I specialize in pieces from Asia,” says Joseph, a former marketing major who left business to pursue his interest in antiques and art culture. He travels and finds many of his pieces in the Asia Pacific area and Thailand. “I can slaughter several languages,” he laughs.

Sharing the space at 1988 Springfield Avenue, is L’Entrepot. Owner Linda Kennedy is both an antiques dealer and an interior designer. “Albert [Joseph] and I have known each other for years,” says Kennedy. “It made a lot of sense to us to share a space.”

L’Entrepot specializes in eclectic European antiques and unique Mid-Century design pieces. The store, which moved last month from its location by the Maplewood train station, is filled with a mix of unique pieces ranging from inlaid wood armoires to wall-sized, hand-painted silk screens to intricately-carved tables. 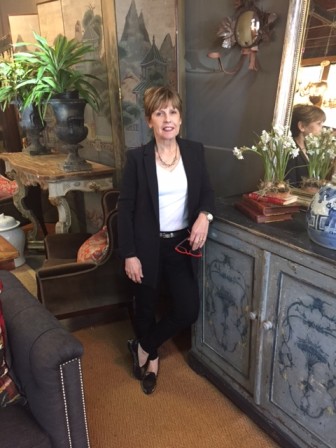 Kennedy honed her skills while she lived in New Orleans, where she ran her own import/export business and appreciated the wrought iron styles and the antique stores. She enjoys finding treasures. “These pieces are all hand-picked by us,” says Kennedy as she motions around the room.

“People often ask me, ‘what are you looking for?’ And I tell them, ‘I don’t know yet, but I will know when I see it,’” says Kennedy. And one glance at L’Entrepot shows she’s a successful treasure hunter.

The Albert Joseph Gallery and L’Entrepot share different sides of a large show room, but they are independent stores. “Our different styles complement each other,” says Joseph. And it makes for one-stop shopping for high-end antiquers, or people who are looking for the perfect accent piece.