A candlelight service will be held to celebrate and honor the life of Moussa Fofana on Saturday, June 12.

A gentle face. Ebullient and endearing. This was the introduction of Moussa Fofana to thousands of community members who lived alongside him but did not personally know this special 18-year-old Columbia High School junior. We also know he was the victim of a fatal shooting at the Underhill Sports Complex on June 6, 2021.

And yet, this unspeakably terrible incident cannot be the way we define Moussa. 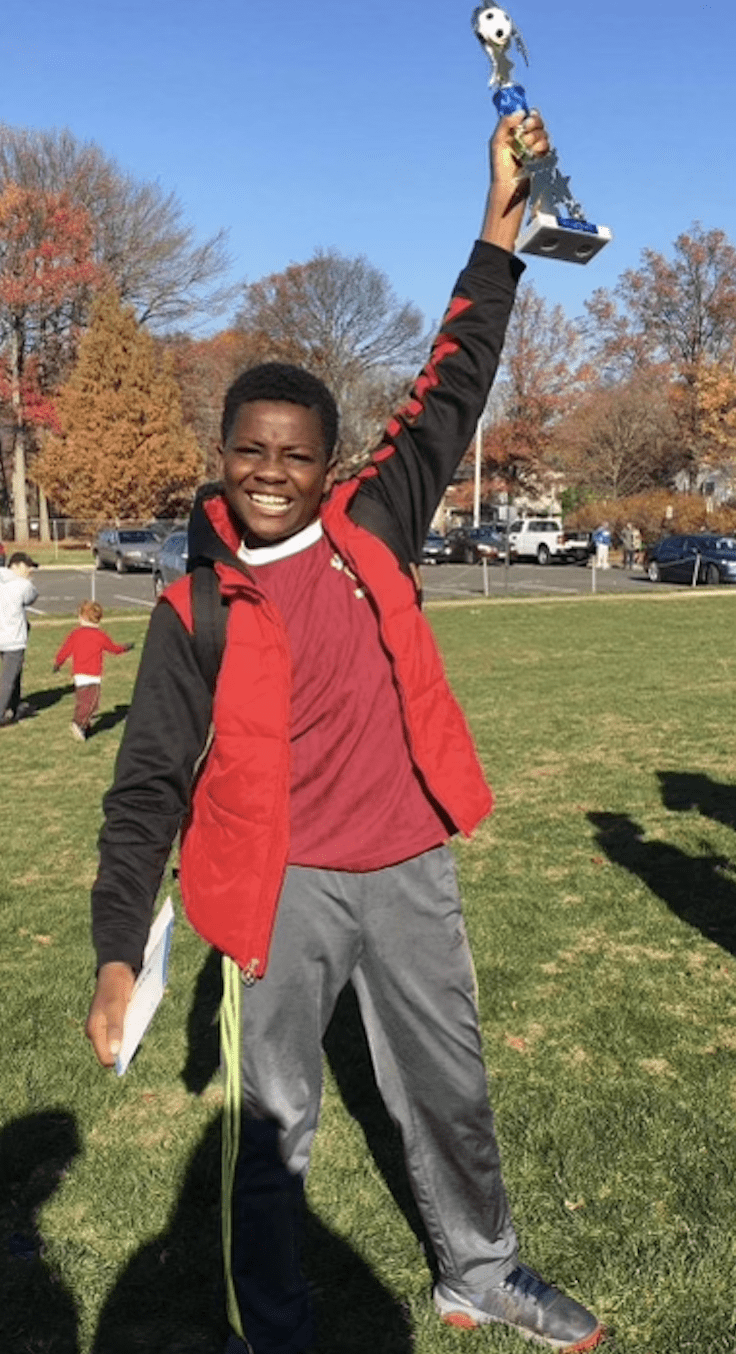 By now, we have learned of his generosity, warmth and exuberance – and how he deeply touched his family, friends, teachers, soccer teammates, and many others who had the opportunity to come across Moussa. We know Moussa as a person who is the definition of what we love about Maplewood and South Orange.

Ryan Muirhead, CHS Cougars Soccer Coach, said that “Moussa could often be heard shouting his favorite phrase, ‘I am unstoppable, I am unbeatable…my name is Moussa!’ — and now the community will strive to continue that legacy for him.

Here is an opportunity for the community to hear from those who knew Moussa.

“He was very happy all the time, very respectful. Everything was a joke to him. The only things he took seriously were school and soccer…Moussa’s dream was to be a professional soccer player. The more he played the more he fell in love.”

Moussa took care of his 5-year-old brother when their mother was at work. “They were very close.”

— Hawa Fofana, Moussa’s mother, who immigrated to the US from Liberia in 2002 and raised Moussa and a younger son.

“I just remember Moussa as being of one of the kindest and purest people I’ve ever met. No matter what he always had a smile on his face and would a soccer ball at his feet. He made everyone around him laugh and would talk about wanting to be a professional soccer player. The community is still grieving and trying to understand why someone would do this. I just wanted to support the family anyway I could and never expected to receive this amount of love from the community. It is truly overwhelming and has truly shown what our community can do when we come together.” — Frederik Hoffmann, soccer teammate, friend, organizer of GoFundMe for Moussa’s family

“Moussa was adored and cherished at MMS. Our community is devastated to learn of this tragic loss of a beautiful soul. Nothing pleased Moussa more than human connection. A student who never went without a thank you and a kind smile, grateful for all who engaged with him. A positive light in our world has dimmed, and our hearts are forever saddened.” — Suzanne Fein, Moussa’s teacher at Maplewood Middle School.

“The CHS Soccer program is heartbroken by the senseless violence which has taken a teammate, a friend, a brother and a son away from this community. Moussa embodied everything that we wanted in a member of our program. His passion for the game was unrivaled, often speaking to his desires of playing professionally one day. Likewise, his love for his teammates also knew no limits, as everyone always knew Moussa had their back. He was the heart of a team that celebrated one of its best seasons in recent history this past fall. We will miss him dearly, not only for his skill but also for the joy he brought each and everyone of us.” — CHS Cougars Soccer Coach, Ryan Muirhead

“I first met Moussa shortly after he moved to Maplewood. [CHS teacher] Katie Simpson helped get him involved in the Soccerhood program we created to give access to kids from local immigrant families a chance to participate in the South Mountain soccer program. My husband [Dan Cohen] was the coach, and my older son Milton was on the team, too. We would often drive Moussa to games and practices for the next many years, until they eventually aged out of the program.

I remember it was hard to understand his English at first, yet it didn’t keep him from talking. Moussa was always a great source of entertainment in the car, he would have us laughing along with his stories and opinions. He was inquisitive and engaged, enthusiastic and opinionated. He had aspirations of being the best soccer player in the world, and believed it so wholeheartedly you couldn’t help but believe it to be true. There were other times he told us he would move to Hollywood and become a famous actor, which also would not have surprised me in the least.

There was a brightness and energy to Moussa which you don’t often find in teenage boys. Even after he outgrew the Baird’s soccer program he would light up when we saw him around town, enthusiastically calling out “hi Coach” and “Coach’s Wife!” He came by our house trick or treating one Halloween, just to say hello, the signature wide grin on his face. My kids would continue to see him at school and around, and they would always tell us that he asked about us and told them to say hello on his behalf. What teenager does that?” — Soccerhood co-founder, Elizabeth Sarkisian

“We’re all just so shocked and my heart breaks for Hawa and Muhammad. I find it so hard to speak about Moussa in the past tense but I will start by saying not only is this such a tragic loss for his family and friends but for anyone who knew him (or sadly those people who had not yet got to know him). Moussa was one of those kids that I couldn’t wait to “fast forward “ and see the amazing man that he would be and the incredible accomplishments he would achieve.

I had the pleasure of coaching Moussa for many seasons. He was a joy to watch on the field, a true competitor and inspiration to his teammates. He always had a smile on his face and always looked as though he was truly loving every moment that he was on the field. More importantly for me, was getting to know Moussa off the field. We spent countless hours in the car driving to and from games and practices and that was where I and my family got to really know him and his warm and vibrant personality. Whether he was singing along to whatever song was on the radio or chatting away and entertaining us all- telling us stories, making us all laugh…those are the moments I will always remember and the memories of Moussa that I will cherish.” — Soccerhood coach, Dan Cohen

“Even in a big school like Columbia, we all knew Moussa Fofana. That’s because his smile and gregarious personality lit up the hallways. He will be missed by his classmates and his teachers, but his spirit will not be forgotten. Right now our focus is on his teammates and fellow classmates to make sure they are processing this tremendous loss as best as possible.” — CHS Principal, Frank Sanchez

“Moussa was beloved by everyone at MMS. He was always ready with a smile or a joke. He seemed to know everyone and everyone seemed to know him. He was kind of like the mayor of MMS. Somehow, he managed to interact with everyone who worked at our school almost every day. He loved people and loved to ask questions–both silly and serious. He enjoyed connecting with other people. Moussa grew in so many ways in his three years with us. We were so proud of the progress he made and we will miss him dearly. We are heartbroken by this tragic loss. Truly, he is gone too soon. Our thoughts and prayers are with Moussa’s family and loved ones.” — Maplewood Middle School Principal, Dara Gronau

“Life is a precious gift. The life of a young person is full of promise, potential and unspoken wonder. The pointless loss of Moussa has robbed our community of the joy and pride that comes from observing our adolescents as they find their voice and blossom into adulthood. This senseless act of gun violence is a reminder of how quickly our daily lives can shift to the unthinkable. We must hug our children and let them know how loved, valued and cherished they truly are.” — Superintendent of Schools, Dr. Ronald G. Taylor

Since learning about his death, both loved ones and community members who did not know Moussa have banded to together to support the Fofana family. As of June 12, a gofundme page has raised over $120,000, including over 2,200 unique donors.

CHS Principal Frank Sanchez plans to collect messages and mementos of a student-created memorial at Underhill so that they’ll be presented to Moussa’s mother.

“Our whole town is heartbroken,” was written by donors who commented on the page.

“Rest in Power and Power, Young King,” said others.

The Maplewood-South Orange community is in great pain. But it is stronger and better because of Moussa Fofana.