From the MAPSO Youth Coalition:

Members of Maplewood and South Orange’s Youth Coalition are organizing a march and series of rallies to protest the celebration of the Fourth of July in their community. The event will begin at 5:30 PM at Flood’s Hill in South Orange, NJ. The students will then lead the group to Columbia High School in Maplewood, stopping at Farrell Field, Ricalton Square, and Memorial Park to hear from more speakers (including Essex County freeholder candidate Sabre Burroughs and a member of the Community Coalition on Race) and to carry out small, themed actions. The anticipated event schedule is attached below.

The students believe that if society wants to accurately address systemic racism, it must address everything, including the holidays it celebrates. They are calling for an end to July 4th celebrations as they have existed and demand that all future July 4th celebration events be moved to Juneteenth. If you agree with their message or want to learn more about it, they invite you to join them this Saturday in person or on a live stream on their Instagram (@mapsoyouthco).

The MAPSO Youth Coalition (MYC) is a group that formed after the death of George Floyd and the national resurgence of the Black Lives Matter movement. The coalition consists of local high school students and graduates who all share a passion for racial justice, education, and action. Since its founding in early June, the MYC has worked toward holding the South Orange and Maplewood Townships, the MAPSO Police Forces, and the South Orange Maplewood School District accountable by attending meetings and by brainstorming for ideas, such as a “Student Bill of Rights”. In collaboration with SOMA Justice, they also co-hosted two events on June 19th, where children and families, and later everyone, could come to celebrate Juneteenth with music, dancing, crafts, and more. The coalition continues to work on ways they can embed anti-racism within both towns, Essex County, and New Jersey as a whole.

July 4th commemorates the birth of America and the Declaration of Independence’s commitment to equality for all. It also honors an American system that was set up only to empower rich, white, landowning men. While we do not dismiss the Declaration of Independence or the acknowledgment of this holiday, we do reject the blind celebration of a promise that has yet to be fulfilled. July 4th needs to become a day of remembrance and action where we commit to fulfilling the maxim that “all men [humans] are created equal” because as the #BlackLivesMatter and other social justice movements have highlighted, we still have a lot of work to do. Despite this, we don’t believe our community and country should be without a pure day of celebration, which is why we propose that all 4th of July celebrations be officially moved to Juneteenth, a day that celebrates when the last enslaved people heard they were no longer slaves. This day should be celebrated as a true day of American independence because it celebrates a monumental step towards independence for all Americans, not just from colonial rule, but from forced bondage.

This event has been organized by student leaders who are members of the MAPSO Youth Coalition. They would like to thank their peers and community members for their continuous support, SOMA Justice for their generous sponsorship and aid, and the Maplewood and South Orange Townships for their assistance.

To find out more about the group, visit their Instagram or Facebook @mapsoyouthco and feel free to email mapsoyouthcoalition@gmail.com with any questions, comments, or concerns. 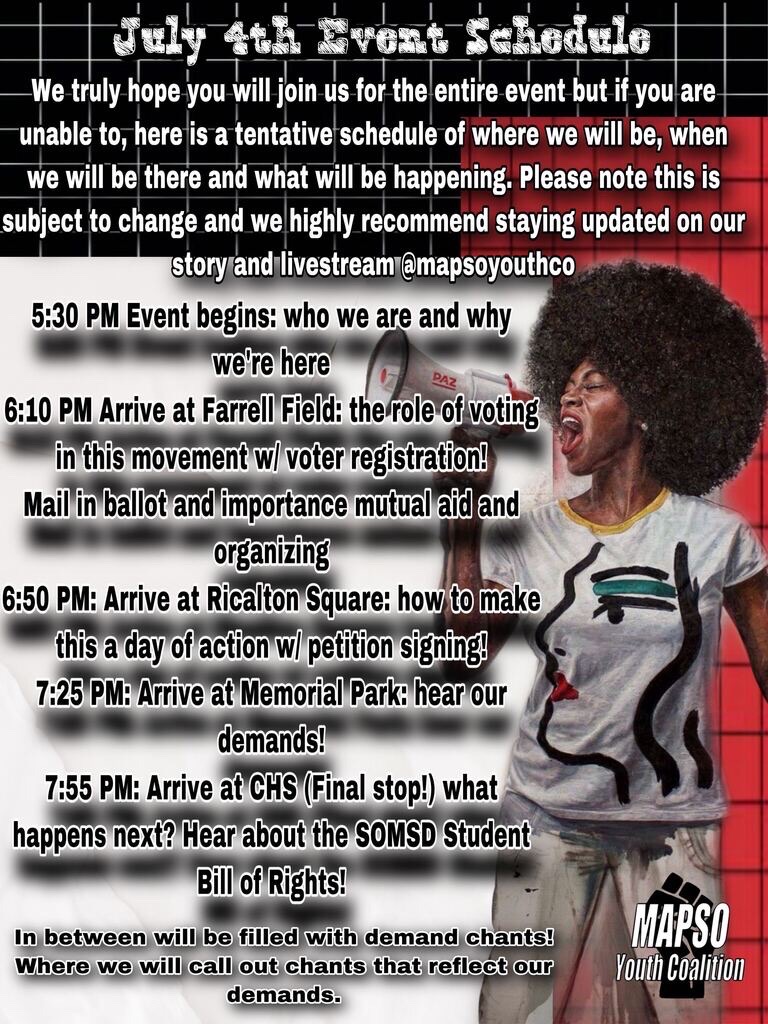