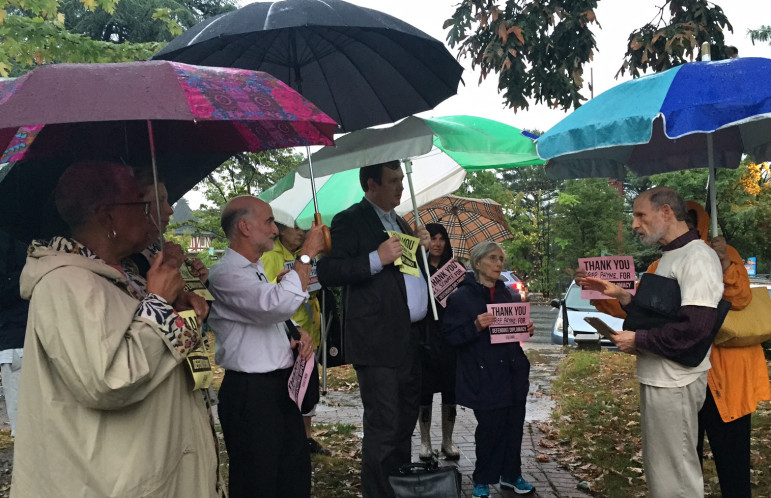 On Thursday, a group of local residents gathered in Maplewood’s Ricalton Square during the height of a record rainstorm to support the Iran nuclear deal agreed to by the U.S., Britain, France, Germany, China, Russia and Iran.

The rally was organized by South Mountain Peace Action of Maplewood and South Orange, in coordination with MoveOn.org which initiated more than one hundred similar rallies across the country.

The rally took place two hours after the Senate upheld the agreement by failing to meet the 60 votes needed to consider a bill to reject the agreement.

“This rally was called to thank Senator Cory Booker and Representative Donald Payne for supporting the Iran nuclear deal, but today’s action by the Senate makes this a rally to celebrate the deal’s approval,” said Paul Surovell, chair of South Mountain Peace Action.

Surovell and other attendees commended Senator Booker for standing behind the deal against an intense lobbying campaign against the deal that included some of his chief financial supporters.

Payne wrote:  “I write to express my gratitude for the work South Mountain Peace Action andMoveOn.org  have done in support of the Iran nuclear agreement, also known as the P5+ I  JointComprehensive Plan of Action. I  sincerely  thank you for your efforts to promote this necessary alternative  to war.”

“The deal isn’t  perfect, but there is no viable alternative. If the deal collapses, Iran would have no limitations on its nuclear ambitions and international sanctions would fall apart,”

“I share your commitment  to securing peaceful alternatives  to war, and I have consistently supported diplomacy over military action to prevent a nuclear-armed  Iran. This diplomatic agreement,  supported  by our international  partners, is a historic opportunity to achieve our primary objective of keeping a nuclear bomb out of the hands of the Iranians,” Payne’s letter said.

In addition to support from a member of Congress, the rally was attended by Greg Lembrich a Democratic Party candidate for the Township of Maplewood, and Vicki Russo, a coordinator of Democratic Party volunteers for Essex County in 2012.

Both Lembrich and Russo commented that the rally showed the importance of citizen involvement as well as the need to for diplomacy as a first option before the use of military force is considered.

Despite the deluge of rain, spirits remained high during the rally under a canopy of umbrellas. Surovell closed the event with a promise that South Mountain Peace Action would remain vigilant against efforts in Congress to undermine the agreement and would also take initiatives to condemn and challenge the threatening rhetoric emanating from Iran.