David Hogenauer, 86, died on April 2 of complications of COVID-19.

Hogenauer was remembered on the South Mountain Conservancy Facebook page in a post by Conservancy President Dennis Percher:

It is with great sadness that I have to report the passing of Dave Hogenauer on April 2nd, who seems to have succumbed to COVID-19 while convalescing at the Crane’s Mill nursing facility from a fall a couple of months ago. He was 86. I learned of this from his wife, Claire, yesterday. She had not been able to see him (though the results of a test for the coronavirus has yet to be received).

I know that all who knew Dave must keenly feel this loss as I do for he was a remarkable person, dedicated to all the pursuits to which he applied himself. For 17 years, he was a driving force at the SMC in his work coordinating and leading hikes, the Trailkeepers and Chain Saw Gang, and the development of SMR maps, His History of the SMR will come out this spring.

Percher also posted additional information on an In Memoriam page on www. somocon.org:

It is with great sadness that the Conservancy reports the passing of Dave Hogenauer of Crane’s Mill, West Caldwell, on April 2nd. Previously of Maplewood, where he was a beloved high school history teacher and active member of the Prospect Presbyterian Church, Dave was a tireless champion of the Conservancy and the South Mountain Reservation. … Recovering from a fall a few months ago, he was recovering at the Crane’s Mill nursing facility, where it is believed he succumbed to the COVID-19 coronavirus, (though the results of a test have not yet been received). He is survived by his wife, Claire, and three children. Our condolences go out to his family and all who knew him.

Hogenauer was a familiar presence to anyone who frequented the South Mountain Reservation, where one could run into him leading projects or tours. Hogenauer was featured in a 2012 article in The New York Times titled “A Forest Amid the Suburbs,” where he took reporter Julia Lawlor on a 2-1/2-hour hiking tour of the reservation, revealing its history, diversity and wonders. The story concludes:

On our way back up Ball’s Bluff Road toward civilization, we encountered a felled tulip tree, its root system ripped out of the earth, and its heavy trunk blocking our path. Dead, I presumed, just waiting for its date with a chain saw.

But Mr. Hogenauer knew better. Something near the top of the tree caught his eye. As we drew closer, another universe revealed itself in a branch poking out of the trunk: a few new shoots of tiny green leaves, reaching skyward. 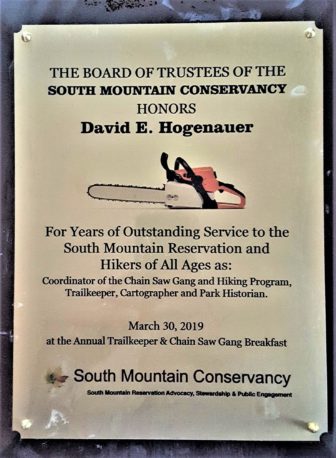