In Memoriam: How Good a Guy Was Jerry Ryan?

How good a guy was Jerry Ryan?

Jerry was such a good guy that he served as a mentor and a supportive resource to me even when I was running against him.

Then, the week after that tough election, he invited my wife Alexandra and me out to dinner on a double date with him and his wife Deborah, where we swapped stories and shared jokes.

He offered to be an advisor or sounding board whenever I needed one, and he followed through countless times over the years. Often when I lacked the context to understand a longstanding issue or just needed to vent, Jerry was always there, gracious and gregarious, to buy a round, give me the inside scoop (sometimes sprinkled with a bawdy tale), and help me find my way.

When I suffered setbacks, he was always among the first to call or text and offer support and encouragement, even if he was on the other side of the issue. When my wife had surgery, he and Deborah came to our house with enough chicken and sides to last for days and sat with us in friendship. 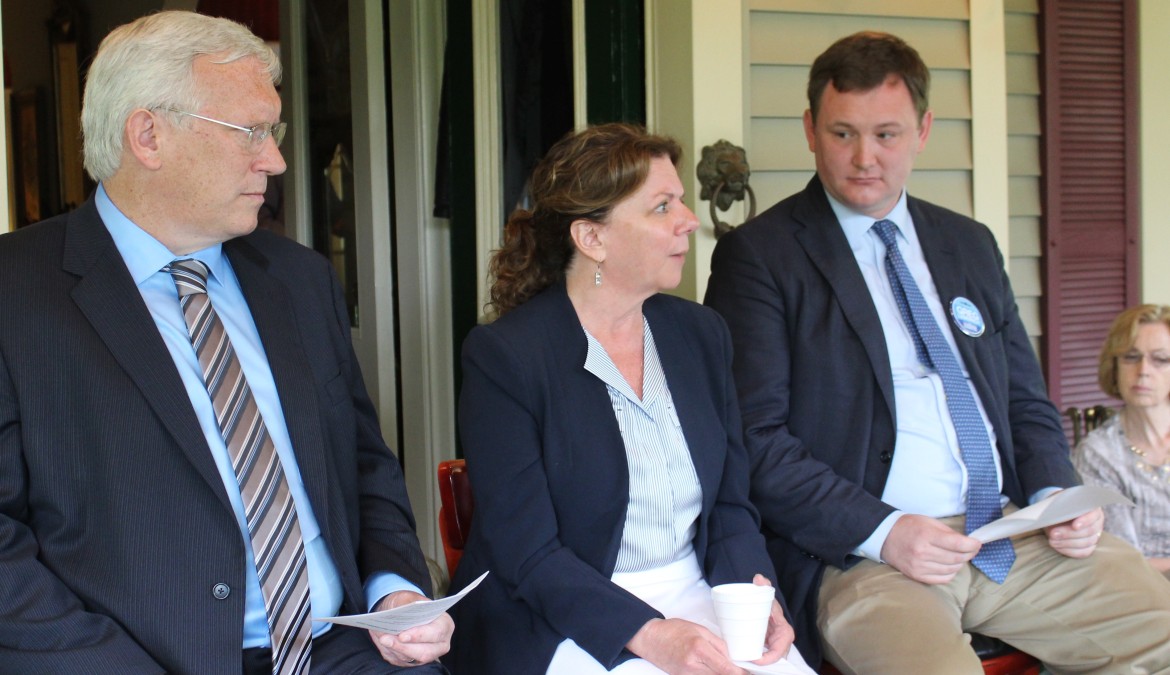 Jerry Ryan, Nancy Adams and Greg Lembrich at a candidates forum in 2015.

How much did Jerry Ryan love Maplewood?

Jerry served on the Township Committee for nearly 20 years, including 3 years as Mayor, and even more time on the Planning Board. Most of it was thankless, but Jerry cherished the privilege of serving the town he and his family loved.

In addition to those thousands of hours of public service, Jerry devoted time to so many community groups and seemed to know everyone in town. Jerry loved serving Maplewood so much that he stayed on the Planning Board, and even served as Chair, for years while fighting a fierce battle with cancer. Even when it was clear that he was suffering, I can recall so many times when he nonetheless showed up at Town Hall and elsewhere to serve, to support others, or to celebrate with his community.

What makes Maplewood such a great community? It’s not just our proximity to NYC, or our beautiful parks and architecture, or our vibrant businesses. Plenty of other towns have those things as well. What makes Maplewood special, and always will, is our people. And Jerry was one of our best. Everyone who enjoys living in Maplewood (or has at any point in the last 30 years) owes a debt of gratitude to Jerry Ryan, even if they never met him. His soul and his service became woven into the fabric of our community, and our lives here are better because of how he lived his here.

I had hoped to tell Jerry all of this in person, but his time was shorter than I thought. As a Township, and certainly a Township Committee, in time we will find appropriate ways to honor Jerry’s memory and celebrate his life. But today I feel sad at the loss of a colleague and friend. And I think back to Election Night 5 years ago when Jerry said, sincerely, that he hoped I would enjoy serving this town as much as he did. If I could, today I would tell him, “Jerry, I do love it, and it’s a great privilege. But the bar you set was really high, and I’m still trying to reach it.” Rest in peace Jerry, and love to Deborah, your kids, and your entire family as they mourn your loss.