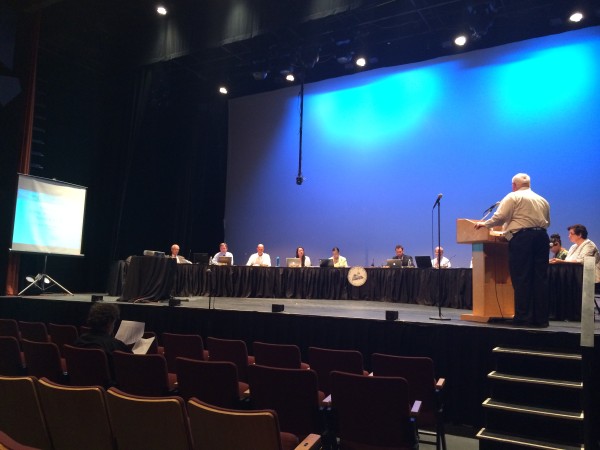 Don Vaughan of RCC Consultants presents the Public Safety Radio Study Report to the Board of Trustee, July 14, 2014.

The Village of South Orange is looking at $640,000 in radio equipment and infrastructure upgrades for emergency personnel.

But part of that cost should be offset by grants.

Don Vaughan of RCC Consultants took village trustees through a review of the village’s emergency radio equipment and systems during a one-hour presentation on Monday night, July 14. He called the $640,000 the “lowest cost alternative to replacing everything you have.”

Vaughan’s study and report was Phase 1 of a four-phase public safety radio upgrade process. Phasess 2 and 3 include putting together a bid package, design, and grant writing. Trustee Sheena Collum, chair of the Public Safety Committee, said that Phase 4 is the actual implementation of the recommendations.

Collum stressed that a contract for implementation would not be awarded “until we have the real costs and know if we have grants.”  Ultimately any requests for funding the upgrades will go back to the Board of Trustees for capital budget funding.

Vaughan has been working since March to assess the situation for police, fire and the rescue squad, interviewing staff, testing equipment, reviewing FCC licenses, talking to interoperability partners, investigating infrastructure and looking at future communications needs.

What he found was a tangled web of aging and mismatched equipment and systems — not untypical for a municipality as standards and technology have changed over the years.

And, Vaughan said, the number could have been much higher. Vaughan told the Trustees that a new state of the art VHF system and replacement of all equipment would cost approximately $1,210,685.oo.

A major part of the recommended plan is to put South Orange emergency personnel on the NJICS or New Jersey Interoperability Communications System — a statewide system that is also used by NJTransit Police, Newark Fire, Belleville, and Union County, and which Maplewood is discussing migrating to.

NJICS offers state of the art options, including GPS, instant messaging, and encryption. It could also make it harder for those with police scanners to follow transmissions. “It’s very difficult for them to spend enough money to track it. It’s thousand of dollars rather than the old scanners for a couple hundred,” said Vaughan.

Vaughan said that South Orange’s radios, antennas, and fixed equipment are about 20 years old at this point.

“I don’t have a 20-year-old car,” Vaughan joked. “You are depending on this daily to protect everyone.”

“Some radios you have have parts only available on EBay.”

He noted that some equipment is “circuit switched like an old telephone. Everything new now is IP based. Everyone wants a computer.”

Vaughan said that satellite receivers at The Baird and Seton Hall “are fine, but all sites need to be upgraded for grounding and lightning protection.”

Many of the upgrades Vaughan outlined were for the South Orange Police Department and the South Orange Rescue Squad. He said that fire department personnel had different, less complex communications needs than police and rescue and were basically functioning well.

Dispatch was also an issue for the Rescue Squad which is dispatched by Union County. “The Squad perceives a lack of priority on their business from Union County…. It’s everybody in Union County first then South Orange.”

Vaughan said he was working withVillage Administrator Barry Lewis and Trustee Howard Levison to order a new antenna for the Crest Drive location. “It’s a faulty antenna system up on Crest Drive, probably why they have such poor coverage and poor paging.”

Part of the study also included meetings with Seton Hall University to “get their new security system into the South Orange Police Department. We are now dialing in on a 10-digit number.” Vaughan said the PD wanted to “Piggyback on [SHU’s] license.”

Vaughan said that the village should start budgeting now to replace the VHF system they are on “that will go away in 5-10 years.”

Rescue Squad’s Union County dispatch with be replaced with REMCS, out of University Hospital in Newark – which is in Essex County and working with all Essex County fire and dispatch.

Vaughan said that the old police department equipment will be donated to the Department of Public Works and Parking and will be reprogrammed and re-installed.

The exact estimate for the upgrades is $639,365.38. Vaughan said the new equipment would have a 10-15 years expected life. (This cost estimate does not include the cost of the new antenna.)

“This is a really complex web of systems that we have operating here and it’s not easy to understand,” said Torpey. “The value of this is very high.”

The Trustees voted to move forward with Phases 2 and 3 which will include grant writing — as the village looks toward federal grants to help pay for some of the cost — as well as putting together a bid package and designing and implementing the next phase.

Collum said, “We want to really aggressively go after grants with the RCC in-house grant writer.”

Later, Colllum told the Village Green, “This expense, as public safety chair, is in my opinion, an item that just moved to the top of our existing capital budget considerations.”