Buoyed by Community Support, Zach Doubek is on Road to Recovery

It’s been a long road home for 12-year-old Zach Doubek, the Maplewood middle school student and athlete struck with MRSA – an invasive staph infection that is resistant to antibiotics — earlier this summer.

Now, after fighting off the life-threatening infection, which began in his femur bone, and enduring 23 days in the hospital (12 of them on a ventilator in a medically induced coma), multiple surgeries and grueling, ongoing physical therapy, Zach is finally home and attending 7th grade at Maplewood Middle School. 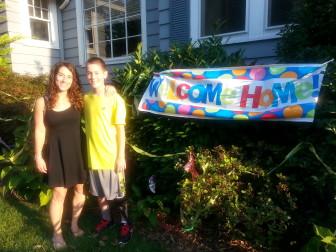 “I was really excited to go back,” he said, sitting on a couch recently in his sunny Maplewood living room, his dog by his side. “To see my friends, get back to a normal routine.” His mother, Marnie, explained how it all began.

It started in early June, when Zach complained of pain in his armpit. Doctors checked him out and didn’t see anything unusual. Then one day after playing a baseball game, Zach began to complain of dizziness and a headache.

Marnie, who is a family physician, and her husband, Joe, chalked it up to general aches and pains following an active game. The next morning, though, the school nurse called and said Zach’s knee hurt and he was limping. Most worrisome was that she said he just didn’t “look right.”

His parents gave Zach over the counter pain medication and kept a close eye on him. Two days later the family’s au pair called Marnie at work. She could hear her son hysterically crying in pain in the background.

At this point, she said, “I knew something was really wrong.”

That kicked off a harrowing odyssey of hospitals, tests and confusion, as doctors scrambled to find out what was wrong with the formerly active and completely healthy boy.

Marnie said she partly blames herself for not “trusting her gut” earlier in the ordeal and realizing something was very wrong. However, MRSA – which stands for Methicillin-resistant Staphylococcus aureus – is very rare in otherwise healthy children, according to the CDC, and it more often seen in the elderly and hospitalized people.

It can lead to life-threatening bloodstream infections, pneumonia and surgical site infections. The number of cases involving children is on the rise, and invasive MRSA kills 7 percent of the children who get it.

Since Zach didn’t have an obvious cut or scrape anywhere, which would have been an entry site for the infection, doctors were slow to suspect MRSA.

After being started on an antibiotic, Zach was sent to a pediatric orthopedist, who tapped the fluid in his knee. The results didn’t show any bacteria. Meanwhile Zach couldn’t walk and was in a great deal of pain, said his mother.

Zach was scheduled to play in the All Star game that weekend. “We still were thinking he’d be OK,” she said. That weekend, Zach had a fever and such severe muscle pain he needed his parents’ help to move his arm or turn his head. His parents slept at his side that night. At 3 a.m., he asked his mom for the water bottle at the side of the bed.

As she went to grab it, Zach said, “Is someone going to fly it to my house?”

“I started to cry,” said Doubek, who realized her son was hallucinating.

She and her husband rushed him to Overlook Hospital, where doctors and nurses quickly arranged for him to be transferred by ambulance to the ICU at Goryeb Children’s Hospital in Morristown. Within twelve hours, he was struggling to breathe, and before the Doubeks could process the chain of events, doctors placed him on a ventilator.

“We looked at each other and said, ‘What the hell just happened,’” said Marnie. “We were in utter shock, it didn’t seem real.”

Zach was in septic shock and was suffering from acute respiratory distress syndrome. By Tuesday, the hospital diagnosed him with MRSA and took him straight to the operating room for the first of six surgeries. The MRSA spread to his lungs; first it stabilized, then it got worse.

Although Zach has heard his parents recount the story many times, as he sat on his living room couch listening to his mother tell it once again, he began to tear up.

Eventually, Zach began responding to treatment. The doctors brought him out of the medically induced coma. He was transferred to Children’s Hospital in New Brunswick to begin receiving physical and occupational therapy.

On August 26, Zach came home. Since then he has gone from being in a wheelchair to a walker to crutches. He has physical and occupational therapy several times a week. After weeks of lying immobile, the growth plate in his leg is not functioning and one leg is shorter than the other. Because he can’t place weight on the affected leg, rehab will be a long, arduous process, his mother said.

He still suffers from sciatic neuropathy, a type of nerve pain. His toes are numb. Still, he is far improved, even pitching in baseball games again – a big step, considering that two months ago he couldn’t even feed himself.

But Marnie Doubek has not a doubt in her mind that Zach will overcome this ordeal. “This kid has the spirit and the drive and the desire to do normal stuff,” said his mother. “He has so much heart.”

The Doubek family has been “overwhelmed with love” from the community. “What a great place we live,” said Marnie. “It’s hard to believe it would be this way anywhere. People couldn’t do enough for us.”

Friends banded together to make and deliver meals to the family. One sent pizza to the nurses to thank them for taking care of him. In a show of support, Zach’s brother Brandon’s 4th grade baseball teammates shaved their heads with the letter “Z.”

Doubek also has high praise for the medical staffs at Goryeb and Children’s Specialized Hospital, which she calls a “happy, positive place” whose staff shed tears when Zach was discharged. She said she is in awe of the nurses, who never rested when caring for Zach.

Doubek said it is still a mystery how her son got infected in the first place. “I asked myself a hundred times, why?” She said it could be that a blood vessel was at an odd angle or there was old existing inflammation from his sports.

They will never really know.

As a doctor, Marnie Doubek sees MRSA infections in the skin all the time. But most of the time they don’t progress into the bloodstream. Doctors say to avoid MRSA, people should wash their hands often and keep their body clean after exercise. Scrapes and cuts should be kept clean and covered.

Still, she emphasized, Zach’s case was very rare and shouldn’t cause parents undue worry. The most important lesson, she said, is: “Trust your gut as a parent.”

Despite the confusion and fear that MRSA can provoke in people, Zach and his mother say people have been nothing but supportive. “I get hugs everyday,” said Zach.