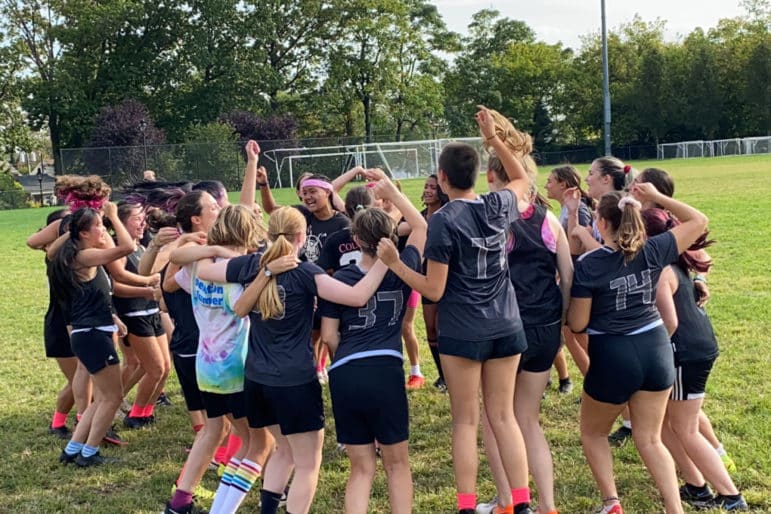 An ultimate frisbee player who catches a disc in the endzone scores one point. If the player who throws in the point is a teammate, that player is credited with “an assist.” Defensive players focus on hand blocks against the other team’s handlers or defensive blocks to knock down a disc before it reaches an intended recipient.

Round one of the DEVYL (Delaware Valley Youth League) tournament resulted in victories by the Warriors over WWP and by Sparkle Motion over the Ravens.

Sparkle Motion racked up 12 blocks to beat the Ravens 7-5. In the exciting round two, Sparkle Motion came back from a 3 point deficit to top the Warriors 7-6 on universe point, which is overtime in ultimate. Junior Irene Chen was the overall top points scorer, with 4 catches in the endzone, while senior Lyra Graff scored the final 2 points against the Warriors for the tie and for the win. Sparkle Motion had 6 more blocks than they had in the first round, showing just how much more competitive the game was against the Warriors, who were the Spring 2021 State Champions.

Head Coach Donovan Hugel thanked “everyone for an AWESOME first tournament … all our parents for supporting us and pushing us over the top even when we were down.” He thanked “the players … for showing a great competitive spirit, winning attitude, and tons of selflessness.”