South Orange-Maplewood teachers are expected to stage a walkout at noon on Wednesday to protest the return to in-person learning next week, as the School District suddenly informed the community late Tuesday night that “Phase 4” of the reopening plan would be postponed.

“After conferring with our local towns’ health departments and internal district health professionals, the District has decided that we will extend the duration of the Phase 3 re-entry stage and pause the launch of Phase 4…which was set to begin on January 25,” wrote Supt. Dr. Ronald Taylor in an email that left parents and students scratching their heads.

As of the night of January 12, 2021, students in PreK-2nd grades, 6th and 9th-grades, and English Language Learners and Special Services Students are still set to return to school on January 19. The rest of the student body — 3rd-5th graders, 7th and 8th graders, and 10th-12th graders — will have to wait until February at the earliest.

Taylor said the change will “allow for a smaller population of students/staff to be in our schools and also provide additional time to monitor Covid-transmission rates (if any in our schools), community and region.” Also, it will give the district a chance to monitor new safety protocols, he wrote.

“It goes without saying that it is our responsibility to plan a phased reopening based on our judgment of what is safest for our school’s children, families and staff while also understanding the social-emotional toll that these circumstances have had on us all,” Taylor continued.

Meanwhile, teachers are staging walkouts across the district on Wednesday, to express their mounting concerns about the safety of going back into their classrooms.

“While we may be pleased to see our colleagues again after months away and look forward to engaging our students through in-person instruction, we do so with a great amount of trepidation,” SOMEA President Rocio Lopez said in a written statement. “We mean that very seriously. Indeed, we cannot help but feel that we are entering into a situation of very real danger, to ourselves and colleagues, and to our students and their families.” 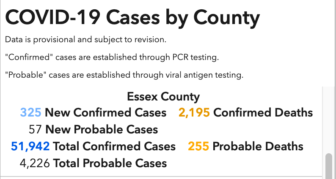 Last week, the union sent a letter to the South Orange-Maplewood School District (SOMSD), asking for it to postpone a return to the classroom until teachers can be vaccinated for COVID-19. Schools closed in March in an effort to stem the spread of the coronavirus pandemic.

The letter said the union would again ask Taylor to rethink the school reopening plan “for the safety of all.”

School officials did not respond directly to the request, which was first made during the initial meeting of the new Board of Education term.

Meanwhile, as letters were going out to parents explaining what cohort their students would be in for the return to school, the district suddenly announced late Tuesday night that it was changing its reopening plan — yet again.

In October, Taylor unveiled a six-phase plan to ease students and teachers back to the classroom, which he detailed in a video released in December.

A plan to bring teachers back in mid-October for hybrid instruction was scrapped after school officials discovered that work on critical ventilation equipment had not been completed despite assurances that it was ready. The snafu drew criticism from the Board of Education.

SOMSD spokesperson Anide Eustache said earlier on Tuesday that “the tipping point for a change of plan” to return to in-person learning would depend on the state’s regional risk level, which is now at orange, denoting a “high” risk. She said that a designation of red, or “very high” risk, by the state Department of Health would prompt a shift to remote-only instruction.

Eustache also said that teachers would be “encouraged at their discretion” to be vaccinated. “The COVID-19 vaccination is not mandated and this time the District will follow guidelines set forth by the state,” she added.

Eustache also said ventilation equipment work “is close to completion” and that school district officials “are confident that we have enough instructional spaces to launch Phase 3 as planned” on January 19.

“There are a handful of classrooms in each of the schools whose ventilation units need additional repair,” she added. “Those rooms have been shared with building principals, and they will not be used for any classroom instruction.”

Eustache said that additional repairs will be made in the coming week and would be ready for the February move into Phase 4. She added that architects will be performing inspection walk-throughs Tuesday through Thursday, along with representatives from the teachers union.

As of Tuesday night, South Orange and Maplewood parents were still waiting to hear whether their children would return to schools in the Monday-Tuesday group or the Wednesday-Thursday group. Under the current hybrid return-to-school plan, students will attend classes two days per week, with three days of online learning. But due to “technical issues,” Taylor’s email said, the schedule assignments won’t be posted until Wednesday morning.

That has caused some headaches for parents with children in the day care program run by the South Mountain YMCA, who have been left scrambling to figure out alternate plans. Children who had been attending five-day-per-week afternoon programs at Tuscan Elementary School received notices on Monday morning that the program would be canceled Wednesday through Friday.

The Village Green reached out to the YMCA for comment.

Maplewood resident Katie Kaplan, whose two sons at Seth Boyden Elementary School attend an after-school Y program, said she has been awaiting word from the school district on what two days her children will be returning to school.

“We’re used to uncertainty, but it’s very distracting,” she said.

Recognizing that there were a lot of moving parts in the school district’s plans and daycare availability, Kaplan said, “It’s a logistical nightmare.”

Still, Kaplan had nothing but praise for the Y. “I think the Y has been kind of the unsung hero in terms of child care in this community,” she said. “They’ve magically come up with solutions, no matter what happens.”