8/28: This article was updated with clarifications from BOE President Beth Daugherty. 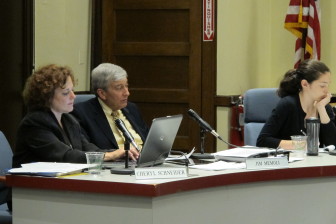 Jim Memoli will remain as acting superintendent for the South Orange-Maplewood School District as the board continues to seek a permanent replacement, said Board President Elizabeth Daugherty.

“After reviewing resumes and interviewing several people,” Daugherty said at Monday’s board meeting, “we have decided that … we would like him to continue serving as acting superintendent until we have a new permanent superintendent in place.

“He is really the best qualified person to lead our district,” she added.

In addition, more than 670 people have already filled out the district’s online survey regarding the community’s input during the hiring process for a new superintendent.

Daugherty said the number of people that have taken the survey was “huge,” but hopes the district can break 1,000 in September.

Haven’t taken the district’s survey yet? Then click here to fill it out now.

The board president left open the possibility that Memoli will return to his former position as assistant superintendent of administration if a permanent superintendent can be found before the end of the school year.

But until that happens, the district will need to hire someone to fill the “void” in central office left by Memoli while he remains the acting superintendent, Daugherty said.

Meanwhile, the board has scheduled various open forums and focus groups to glean feedback from the community and stakeholders in the search for a new superintendent.