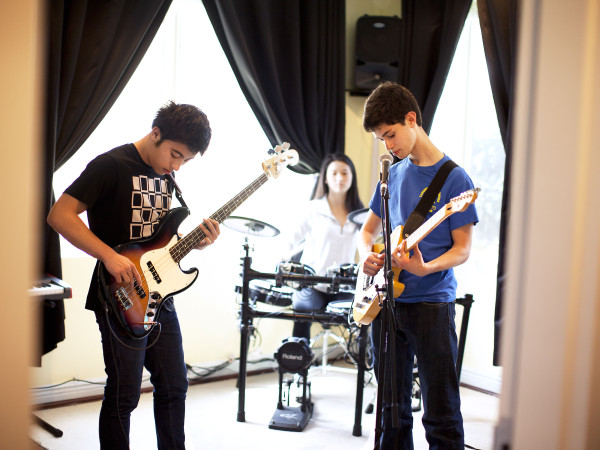 Redefining music education was the catalyst that turned two musicians and Berklee grads into entrepreneurs. Though Sean Killary and Sam Morgan grew up just towns apart (Killary in Livingston, Morgan in Millburn), with many of the same interests and talents, it wasn’t until they attended the renowned music school that they met and realized they shared the same vision for revolutionizing the way music is taught. Morgan returned to the Garden State and began giving private music lessons but realized, with only so many hours in the day, he’d quickly maxed out his potential to reach as many students as possible.  He and Killary, who’d graduated a year earlier, reconnected and the two began brainstorming and, after many iterations, So.i.Heard House of Music was born. 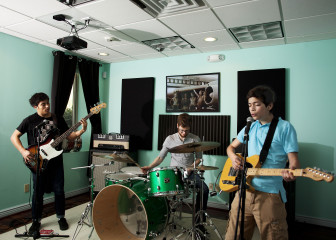 Walking into the East Willow Street space, which was completely redesigned by the duo, one immediately gets the vibe: This isn’t your traditional music school. The first clue is that the front room isn’t cluttered with retail merchandise.

The second is that tucked away in the back room sits an elaborate state-of-the-art recording studio. Another component you won’t see elsewhere: Each of the five private lesson rooms is outfitted with iPads and computers, which tap into students’ love of technology and allow instructors to incorporate the latest music education software into each lesson. “We wanted to create an experience that we would’ve loved growing up,” Morgan explained. “Students have a chance to learn what music production is all about and they’re introduced to the basics of music recording. That’s a new concept for the K-12 set and it’s something we didn’t see until we got to college.”Morgan and Killary concede that many children and adult musicians are often intimidated by the very idea of music production and recording, but added that once they’re introduced to it, they embrace it. 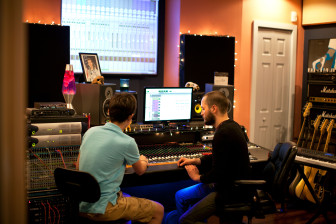 “It seems so foreign and unattainable,” said Morgan, “but you can learn to do it and create songs just like the ones you hear on the radio.”Bringing together all facets, including learning to play an instrument, how to read music, improvise, interact and record, excites students and keeps them motivated, the business owners agree.So.i.Heard devotee and Seth Boyden School student Hudson Pollock began studying at the school as soon as it opened its doors a year ago and said the instruction he’s received has made him feel “more involved” and “more understood” musically.“So.i.Heard’s music lessons differ from other music lessons in the way that they don’t just say that, for example, a C and a G sound good together, they explain why,” Pollock said. “One thing I enjoy a lot about So.i.Heard is how fun and interactive they make music. When my mom says, ‘Time for guitar!’ I always respond, ‘YAY!!'” Pollock and other students treasure So.i.Heard’s other unique amenities which include the opportunity to stop in during “office hours” — open education sessions which are held daily and free for all students — and the ability to use the recording studio, also at no additional cost to monthly students.Striving to be “a breath of fresh air” in the music market, So.i.Heard is continually coming up with new ideas to keep students engaged. Proving its desire to be relevant to where interests lie, the school will host a “Frozen” camp in late August, giving students a chance to learn, perform and record songs from the beloved movie.

This fall, So.i.Heard will hold classes in recording and production, a rock and blues ensemble that allows musicians to jam with their peers, and a vocal performance class.Starting a business straight out of college may seem a daunting undertaking to some but Killary and Morgan regard it as a “dream come true.” After celebrating the school’s one-year anniversary in July, the pair, who refer to the past year as a “crazy ride,” has big plans for the future.“We’re looking at opening up two to three locations within a 20-square-mile radius and eventually take over the East Coast,” Morgan said. “The kids are happy; the parents are ecstatic. We’re on the path to do great things and there’s nothing we’d rather be doing.” “Stop in anytime or come down and check us out at the Millburn Street Fair (Sept. 21),” Killary invited.So.I.Heard House of Music, 10 E Willow St, Millburn, NJ 07041 (973) 232-5111. Half-hour lessons are priced at $40; one-hour sessions cost $75. So.i.Heard also offers a one-hour trial lesson for $40. For more information, visit www.soiheardmusic.com, call 973-232-5111 or email info@soiheardmusic.com. Find out about summer camps here.