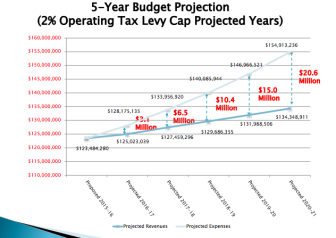 The South Orange-Maplewood School District is looking at a “fiscal cliff” in a “fiscally hemorrhaging environment,” reported Superintendent of School Dr. John Ramos on Wednesday, March 2.

Ramos made the statement at a workshop for the 2016-17 school district budget, one that contemplates cutting 19 full-time employees, including nine teachers at Columbia High School.

The superintendent, though in his first year with the district, said he understood that the district had been staving off the cliff for several years by looking for efficiencies in its budget; however, he said that the ability to continue to find further efficiencies was dwindling. Ramos said that the district was facing a widening gap between revenue and costs that would reach $20 million by 2020 if conditions remained the same. Those conditions, said Ramos, were: the state-required 2% cap on the tax levy, “inadequate state funding,” and “increasing costs.”

Ramos said that some of the cuts could be avoided through “the painful option” of looking at banked cap and raising the tax levy beyond 2%. “It would also increase our revenue base as we look into future budget cycles,” said Ramos.

Ramos stated that, outside of grants and increased state funding, the district hoped to change the conversation about budgeting through the Strategic Plan with “an eye towards developing a new model that is both 21st century driven and more efficient.”

Following up on the initial presentation of the preliminary 2016-17 budget at the Feb. 22 Board of Education meeting, District Business Administrator Cheryl Schneider once again presented the budget but this time with more details on the proposed cuts.

The personnel cuts for 16-17 were proposed for 19 full-time employees, with 14 of those positions at the high school.

Schneider stressed that the district had worked to contain costs in this and past years by looking at everything from health insurance contributions, to shared services with Maplewood and South Orange, to cooperative purchasing agreements with other districts, in-house transportation and more. She once again went through a list of spending reductions outside of job cuts, including cutting memberships, periodical subscriptions and elementary library supplies, as well as bringing professional development in house and changing paraprofessional oversight.

Next steps for the budget are a community forum on Monday, March 7 at 7 p.m. at 525 Academy Street, followed by a hearing and vote on the preliminary budget at the Board’s regular meeting on March 21.

See the impact of using the banked cap in our previous budget story here.

This report will be updated with Board members’ and public comments shortly.

See Schneider’s Feb. 22 budget presentation below. We will add her March 2 presentation when it becomes available.