The Columbian: Inside the Protest-The Passion, The Unity, The Portrayal

With all schools in New Jersey in distance learning mode, the dedicated staff of Columbia High School’s award-winning student newspaper, The Columbian, proudly present their second on-line edition at thecolumbianchs.com. The following In Depth column “Inside the Protest,” by Noori Zubieta, Class of 2020, was originally published by The Columbian on June 10, 2020. With permission from CHS administration and staff at the newspaper, Village Green will be posting more content from the current issue of The Columbian in the coming days and weeks.

Chants of “No justice, no peace,” “Say his name! George Floyd,” and “Black lives matter” ring out as the crowd of hundreds moves forward along a racetrack-like path through the streets. Some protesters carry signs with sprawling letters that read “My skin is not a threat” and “What’s going on is new-age black genocide” while others play music on speakers, beat African drums, dance the Cupid Shuffle and burn sage. At one point, the mayor speaks about the peaceful intent of the demonstration. The sea of protesters, mostly clad in solid colors and Black Lives Matter gear, listens appreciatively and continues to march united.

Such is the scene described by Ciara Taylor, ‘21, at the Newark Black Lives Matter (BLM) rally on Saturday, May 30 after the recent murders of George Floyd, Breonna Taylor, Ahmaud Arbery and Tony McDade. Ciara Taylor met up there with a group of fellow Columbia High School (CHS) students and noted, “We saw a lot of diversity, and it was just a very nice environment overall.” However, she said, “I found it ironic that we were at a protest about police brutality, but we were being barricaded in by the police [to control] where we could protest.”

The Newark rally was the first—and largest—in a series of BLM events that CHS students attended. Throughout the ensuing school week, virtual events occurred. They included “Working Towards an Anti-Racist MAPSO,” an open conversation held jointly by CHS’s Black Student Union (BSU) and Students for Justice through Zoom on Monday, June 1 and a support check-in held by CHS teachers and counselors through Google Meet on Wednesday, June 3 at which students expressed their feelings and read poetry that they had composed. They each garnered about a hundred participants.

It was on [May 29] that the first physical protests in the Maplewood-South Orange (MAPSO) community took place. Samuel Berry, ‘23; Cephia Reid, ‘23; Aaliya Qawiy, ‘23; Catherine Valentine-Martins, ‘23; and Annali Doyle, ‘23, organized the Walk for Justice from Spiotta Park in South Orange to Town Hall in Maplewood. The event, which started at 12:30 p.m. and lasted until about 3:00 p.m., drew nearly one thousand people. 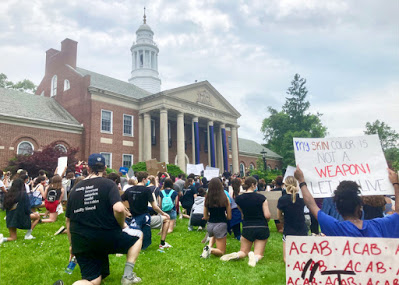 One proud BLM advocate, Jaelen Clyburn, ‘22, attended the protest with her mother and her boyfriend, who toted a sign saying, “We should come together, not divide.” Chants were similar to those at the Newark rally, and it was similarly peaceful, with a minimal police presence there “on the side streets blocking off cars,” according to Clyburn. Eleanor Clarke, ‘20, another marcher, commented, “It’s important to show how change needs to be implemented in all areas of the country, not just big cities.”

Clyburn called the crowd size “heartwarming” but also acknowledged the truth in one speech-giver’s observation: a sizable portion of attendees had previously said and done racially problematic things and were now only there due to the trendiness of protesting. Clyburn said, “[BLM] is more than just a hashtag to put on social media.” Taylor elaborated, “Performative activism is manipulative and very unethical. … It’s an insult because it invalidates all the black people on the front lines literally protesting for basic rights and just not to be dehumanized.”

During the 1.3-mile journey, protesters chanted while one man rolled a speaker playing music. Residents of Valley Street came out to clap and hold signs in support. When the crowd arrived at Town Hall, organizers gave rousing speeches and then made way for an open mic. Clyburn recalled particularly enjoying words from Taylor, Ty Dorvil, ‘20, and Amir Brown-Holt, ‘19, who expressed their frustration with MAPSO’s remaining racial inequities. Clarke said, “There are many things white allies can do, such as donate and sign petitions, but an important reminder is to help black voices be heard.”

Whereas attendees skewed teenaged at the Walk for Justice, there was a vigil held for Breonna Taylor later that day which saw a crowd of more mixed ages. Despite intermittent rain, many Essex County residents came out in large numbers to remember her on what would have been her 27th birthday. By 6 p.m., Memorial Park was full of socially distanced protesters. (The gathering addressed COVID-19 concerns—which Ciara Taylor dubbed the biggest obstacle to participation—with distanced spots demarcated by flags.) Guests were encouraged to bring candles, and organizers came around to provide ones to those who did not already have them and light the wicks.

Samantha Storch, ‘11; Brianna Medina, ‘11; Sittra Omer, ‘13; and Zoë Pulley, ‘11, organized the vigil as a way of remembering Breonna Taylor’s legacy in a time when the narrative tends to focus on the killings of black men and forget those of black women. Clyburn noted that “society portrays black women to be so strong, and we can’t be vulnerable; it’s almost hard for them to honor black women. … We’re hearing George Floyd and Ahmaud Arbery, and we rarely hear about Breonna Taylor and Corinne Gaines and Atatiana Jefferson and Sandra Bland.” 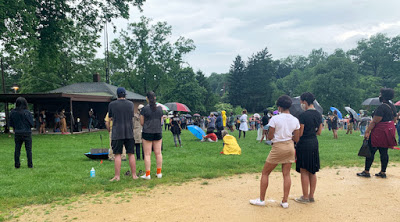 During the vigil, the microphone was once again turned over to the public after initial remarks by organizers. Those who went up to speak included a West African emigrant shocked at the treatment of black people by police in America, a former Board of Education member dismayed at the slow progress towards racial equality in the school system, and a ten-year-old girl urging action from everyone.

The [May 30]  march, organized by Makenna Davis, ‘22, and Meskerem Hyman, ‘22, raised money for Julius Jones (more donations can be Vemoed to @free-julius). It ended at the lawn of Memorial Park, where Davis and Hyman led a community discussion. Hyman said, “We wanted to make it more inclusive and personal, so we had the idea to create an open circle where everyone could look at each other with the speaker in the middle.” Their event saw an outpouring of support, mostly from teenagers and young adults.

Meanwhile, the SOMA Family Protest was targeted towards families with young children, and the event promoted social distancing. Families laid out towels and found some shade under leafy trees as they held up signs. The crowd, at about six hundred, soon covered too great an expanse for the microphone to reach, at which point speakers engaged in a call-and-repeat with protesters. At one point, a speaker called out the names of those lost to police brutality and racism, the crowd of families calling back “We speak their name” after each.

Youth were central to the protest. Jordan Muhammad, ‘20, a leader of Students for Justice, spoke about the destructive police and justice systems, and many other young people took the microphone. One proclaimed, “How was America ever great? If that’s what you call great, I don’t ever want to make it great again.” Another sang a hopeful rendition of “We Shall Overcome” from her perch at the pavilion. 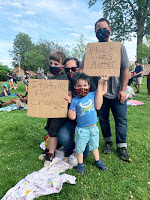 Families stand with their signs at the protest in Maplecrest Park. Photo credit: Noori Zubieta

All five MAPSO events proceeded peacefully and without police arrests. However, more largely, within the BLM movement, there is disagreement over whether all protests need to stay peaceful. In fact, Taylor recalled an unexpected encounter during the Newark rally with a few new-era Black Panthers who were passionately debating whether violence and looting might be more effective. Taylor opined, “[w]hether it’s looting or rioting or protesting or marching, you’re still getting your message across.” (Ultimately, the Newark rally that she first attended did remain peaceful, and it saw no arrests, for which Taylor was grateful, explaining that it helped water down the stigma associated with Newark being a predominantly black city.)

Even when protests are mostly peaceful, the media tends to overrepresent violence, according to Clyburn and Taylor. Taylor cited the media’s reluctance to report on the dancing, sage-burning, singing, drumming, poetry-reciting aspect of protests; she said it is only with the false narrative of complete havoc that the government can justify “implementing martial law and sending in the National Guard.”

Many hope the renewed vigor of the BLM movement achieves results, with Taylor feeling that widespread protests were already responsible for the additional charges brought to the police officers who killed George Floyd. Protests continue, [including the SOMSD Teachers for Black Lives Rally and March] from Grove Park to Memorial Park [which took place] June 15. Clyburn highlighted the importance of MAPSO protests, citing the Fourth of July incident and MAPSO’s persistent educational biases despite its harmonious facade. Clyburn revealed, “I’m tired, I’m scared. It’s scary. This isn’t something that anyone wants to live through, especially when it’s targeting a group that you’re a part of. It’s scary to think that at any moment, this could happen to you, or this could happen to somebody that you love. … We need to be the generation to end it.”