written by Natasha Romano, Guest Columnist for the Columbian '20 May 15, 2020
0 FacebookTwitterPinterestEmail

With all schools in New Jersey in distance learning mode, the dedicated staff of Columbia High School’s award-winning student newspaper, The Columbian, proudly present their first on-line edition at thecolumbianchs.com. The following guest column “#TheChineseVirus” by Natasha Romano, Guest Columnist, Class of 2020, was originally published by The Columbian on April 28, 2020. With permission from CHS administration and staff at the newspaper, Village Green will be posting more content from the current issue of The Columbian in the coming days and weeks. 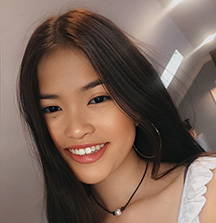 You’re waiting in line at the register, arms stacked high with makeup wipes, toothpaste, cotton balls, Chapstick and a bag of Cheeto Puffs. You hear the middle-aged woman in front of you ask the store clerk about hand sanitizer, and he replies that the store is out of stock. She sighs before turning around to lay her eyes on you.

Her expression suddenly shifts into one you’ve never seen anyone give you before. It is as if you look like a purple one-eyed monster ready to devour her in a single bite. You turn around to see if there is someone behind you that caused her expression but realize you’re the only one in line. When you turn back around and your eyes meet the woman’s, she begins side-stepping towards the exit while maintaining that look of terror.

After paying for your items, you run to your car. The second the door shuts, you feel your breathing pick up, and tears flood from the corners of your eyes. You sit in the car munching on Cheeto Puffs until you feel like you’re able to drive.

I’m one of thousands of Asian Americans who have experienced COVID-19-related xenophobia. East Asians all over the world have reported acts of such racism, ranging from verbal abuse to physical attacks.

I’m one of thousands of Asian Americans who have experienced COVID-19-related xenophobia.

In early March of this year, 23-year-old Jonathan Mok was attacked in London by a group of four men. The Singaporean college student reported being kicked as one of the men yelled, “I don’t want your coronavirus in my country.” Shortly after the attack, Mok posted images of his injuries on Facebook.

This isn’t the first time racially motivated attacks have spiked in the wake of catastrophic events. After the September 11 attacks, there was an increase in reports of hate crimes against Muslim Americans due to their religious affiliations. Four days after 9/11, a gunman murdered a 52-year-old Sikh gas station owner, Balbir Singh Sodhi, because the man mistakenly thought Sodhi was Muslim.

Similarly, reports of racism towards black people rose during the Ebola virus outbreak of 2014, which originated in West Africa. Some schools in Italy required students of African descent to present additional health documentation in order to attend. White students, however, weren’t required to do the same. Furthermore, in New York City, 11-year-old Amadou Drame and his 13-year-old brother Pape, who had recently immigrated from Senegal with their family, were called “Ebola” by their classmates and beaten up on the playground.

There appears to be a trend of discrimination against particular groups due to their race or social status admist global crises. This discrimination was evident during the HIV/AIDS epidemic, aimed against the global gay community, and it is evident now against East Asians. So when our president dubs this latest viral threat the “Chinese Virus,” he is only encouraging this xenophobia.