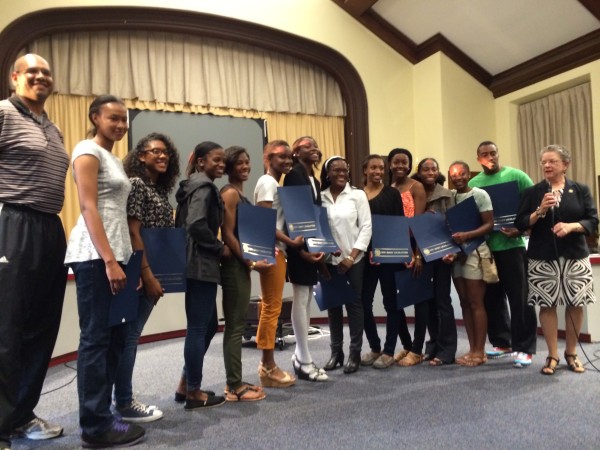 Columbia High School track star Olivia Baker and the entire CHS girl’s track team received a citation from the state legislature at the June 16 South Orange-Maplewood Board of Education meeting.

Earlier this month, the Star-Ledger named Baker as the New Jersey “athlete of the year,” Morgan “coach of the year” and Columbia “team of the year.”

State Assemblywoman Mila Jasey — who served three terms on the South Orange-Maplewood Board of Education — presented the joint legislative resolution.

“You can have all the talent in the world but you have nothing if you don’t have someone to teach and lead and guide you.”

Morgan herself spoke movingly about the team and her coaches.

Morgan said she was particularly proud of the academic achievements of her team and the fact that all the graduating seniors on the team will attend top universities. Baker, whom the Star-Ledger has called “one of the greatest track and field athletes in state history,” will attend Stanford in the fall.

Some highlights of Baker’s Columbia High School career: In April, she ran a “stunning anchor leg” to lead her team to its second consecutive Championship of America in the 4X800 relay at the Penn Relays in Philadelphia. Baker 200 split was the fastest ever in Penn Relay history. In May, Baker won four gold medals at the New Jersey Meet of Champions (repeating her feat of the previous year).

And Baker is not alone in her excellence.

Columbia was the first team in Penn Relay history to repeat in winning the 4X800. The team created a NJ state record time with the win, which was also the second fastest in U.S. history. Running with Baker on the Penn Relay 4×800 were Imani Coleman, Aigner Bobbitt, and Emilie Cowan.