For the fourth time, the Maplewood Planning Board adjourned on Tuesday night without moving to a vote on the site plan review for the Maplewood Post House redevelopment. 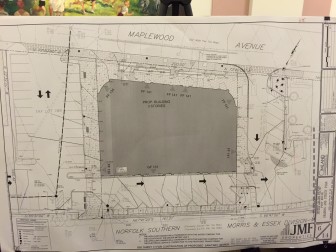 By the time testimony from the developer, Maplewood Redevelopers, LLC (an arm of JMF Properties) and the public, and a question and answer period were complete, little time remained for board deliberations. The board agreed to continue deliberations, and possibly to vote, at its next regularly scheduled meeting on Tuesday, Oct. 13 at 7:30 p.m. Planning board members seemed guardedly optimistic the vote would take place that night.

First, the loading zone that had been an area of contention has been relocated to the Ricalton Square side of the building. Project engineer Eric Keller said the developer was able to relocate the loading zone, which would be roughly 10′ wide by 27′ long and could accommodate trucks up to 30′ long, without any net loss in overall parking spaces.

Second, the dumpster for the five retail establishments in the building has been moved from behind Village Coffee to the interior, garage level of the building. This means there will be no need to remove the sawtooth oak that had become the center of controversy.

Members of the public and some board members questioned Keller about safety issues related to Kings’ tractor-trailers pulling into and backing out of the Ricalton Square drive aisle. In the new plan, trucks backing into the Kings’ alley across the street will need to go over the sidewalk — possibly more than they currently do — to make the maneuver. 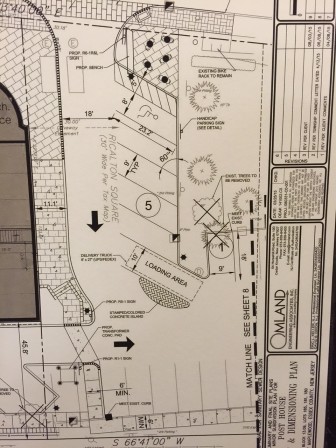 Board member Jerry Ryan wondered if the situation was any more dangerous than it currently already is; however, Acting Chair Jim Nathenson said the public had expressed enough concern that he wanted to ensure the issue was thoroughly covered.

Dave Helmkamp said he thought JMF should be required to show there is sufficient egress for tractor-trailers to make the turn around the newly proposed loading zone if there is a truck parked in it. The Planning Board’s engineering consultant Robert Bratt, agreed.

Other issues revisited and that the board will continue to deliberate included the building’s setbacks, its level of LEED certification; parking (Village Keepers’ Stephen Weber presented his own parking study to the board in which he claimed the project would substantially increase weekend demand for parking in the Village); and the sewer bypass JMF is proposing behind Village Coffee, which would require an easement from that property owner.

David Huemer said adamantly the possibility of granting such an easement (which would be in the jurisdiction of the Township Committee, not the planning board) was “lousy policy” and would be a “slippery slope.”

As at previous meetings, some exchanges grew heated. At one point, several people began shouting out to the board, prompting Ryan to call for civility and Norin to express visible frustration, noting that if there were conditions of the site plan that could not be modified JMF would follow proper procedure and come back before the board to seek approval. 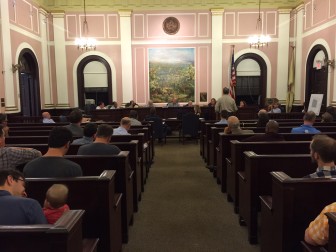 Village Keepers president Dirk Olin said he “abhorred” seeing public officials be unfairly  “pilloried” and “libeled.” He then brought up the accusation that Ryan and Mayor Vic DeLuca had a conflict of interest by deliberating and voting on the Post Office project when they were, as Township Committee members, involved in negotiations.

Ryan asked if Olin was insinuating that Ryan would have any financial gain from the project. Olin said no, only political gain. Edelson shut down the discussion, saying it was not germane to the site plan and would be tackled during the Village Keepers appeal process scheduled for November.

Olin emphasized in an email that he “vehemently denied” any belief of a financial conflict involved Ryan and DeLuca. “Vic and Jerry are honorable public servants whose contributions are vastly under-appreciated by people on both sides of this argument. [However], their judgment [is] so wrongheaded—that I felt compelled to forcefully advocate against what they’re proposing…” 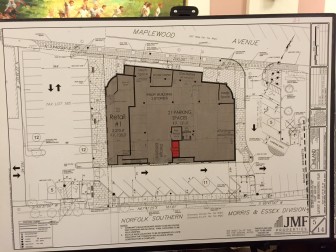 Several speakers expressed exasperation and confusion with the process, prompting Edelson to explain that the planning board is compelled to follow state law with regard to how it operates. “It’s frustrating for the board, it’s frustrating for you, but that’s what we have to do.”

Some members of the public urged the board to deny approval for the plan if they believe the developer is not meeting any objective of the Redevelopment Plan. “The redevelopment plan is not sacrosanct,” said Greg Lembrich. “You can use your judgment…”

One new development was an announcement by Inda Sechzer, an advocate for repurposing the old building, that she had unearthed old plans that showed the possibility of an “archeological site” or tunnel located under the Post Office where the original building (which served as town hall and the library) once stood.

Sechzer said she presented the information to members of the town’s Historic Preservation Commission.

Reached by phone Wednesday afternoon, HPC Chair Virginia Kurshan said Sechzer had approached the commission with the plans, which show a dotted line where the original building was.

While she called the discovery “interesting,” Kurshan said it was unlikely that anything of note would be unearthed. “…there’s not a whole lot we could learn from the remnants of a mostly 19th century building that we [don’t] already know.” She continued, “It can’t tell us anything that would be terribly useful.”

Because the old building was wood frame with a dirt basement that didn’t go down very deep (whereas the Post Office was built deeper to serve as a fallout shelter), and because of the equipment used to construct the new Post Office, “if anything [of historical value] happened to be there, it [is now] gone.”

Kurshan said the HPC had voted twice against designating the Post Office a historic structure, and therefore the HPC has no role in advocating for its preservation or against its demolition.