Say what you will about Maplewood Planning Board meetings, they are seldom dull.

Case in point: Monday night’s special meeting to continue a hearing on the Post House development — a 20-unit apartment building with ground-floor retail proposed for the site of the former Maplewood Post Office.

After testimony from the developer’s engineer Eric Keller and questioning from Planning Board members, former Mayor Fred Profeta — and Village Keepers board member — took to the podium and began to question the engineer in Perry Mason-like fashion about a planned combined dumpster site behind Village Coffee and whether or not a tree in the location was slated for demolition.

Profeta started asking Keller questions about the size, type and history of the tree, ultimately pulling out photos of the tree. 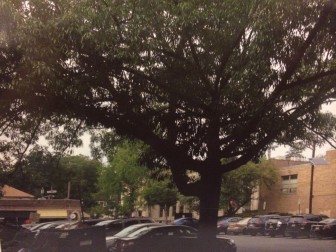 Planning Board Chair Tom Carlson interrupted, “Maybe you can tell us where you are going with this?”

“It will develop,” said Profeta.

Ultimately Profeta revealed that the tree was protected by ordinance due to its circumference and started presenting other arguments about the tree and placement of the dumpster.

The developer’s counsel Andrew Norin asked, “Can I ask the relevancy of this line of questioning?”

Profeta responded, “There is no understanding with the owner of the Village Coffee about this tree.”

Planning Board member Nancy Adams interjected: “We can certainly make recommendations for an alternative site?” she asked, referring to the centralized dumpster.

Keller agreed with Adams, but said there would be trade-offs, such as potentially losing a parking space. Norin reassured the Board, “I”m sure we’d be willing to explore ways to try to save the tree and move the dumpster.”

Norin was clearly growing frustrated: “This issue could have taken 60 seconds to address, and we’ve discussed we will work with the town on the location of the dumpster.”

Profeta attempted to discuss conversations that the Maplewood Village Alliance had had with the owner of the Village Coffee building with regards to the tree, but Carlson interrupted.

The exchange elicited some bemused and bewildered expressions amongst the 30-some audience members. The assemblage seemed split between those who opposed the project and those who supported it — or at least supported the process. Members of Village Keepers, Engage Maplewood and Village Facts were all in attendance.

As cross examination continued from the public, Carlson urged those taking the microphone to stick to questions related to testimony and not voice opinions or make statements. At some points, Carlson seemed to feel that members of the public were seeking to stall the process. “You’ve asked him that question three times,” said Carlson to Dave Helmkamp of Village Keepers at one point as Helmkamp questioned whether or not the width of the driveway (18 ft) between the proposed project and Ricalton Square could handle parked delivery trucks and passing traffic.

A number of questions underlined the opposition to the project felt by many of the questioners. Frank McGehee told the Planning Board that the rule of thumb for the number of school age children in multifamily housing were incorrect in his experience (he said 20% of units at the Station House had school age children by his estimate). And John Harvey told the Board that he was “putting the town on notice, you’ve got a safety condition on that corner,” referring to the corner of the project where trucks backing up to the Kings Supermarket loading dock would incur on a portion of the sidewalk.

The Planning Board will first go into closed session at 7 p.m. on September 8, and then convene the public session at 8 p.m., with the Post House site plan as the first item on the agenda, followed by discussion of an appeal by Village Keepers. Site plan review for Able Baker, originally scheduled for September 8, will be rescheduled.

VillageGreenNJ.com will follow up this story with another report on the 20-plus deviations to the redevelopment plan requested by the developer.