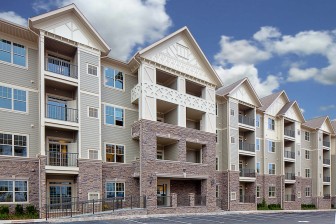 The Maplewood Township Committee has voted to move forward on an official request from Elite Properties to change its proposal for additional development at the Maplewood Crossing site on Burnett Avenue from an 8-unit townhouse-style condominium development to an apartment complex of 25 rental apartments.

Twenty-three of the units would be two-bedroom apartments and two would be one-bedroom apartments. Elite Properties has already developed 126 units of housing at the site. Elite reported in the fall that more than 90% of those units were leased. The new development would bring the number of units at the site up to 151.

“What this [motion] would mean is contracting with the town’s planning consultant to draft the changes that are recommended. These changes have been negotiated with the developer by the economic development committee,” said Mayor Vic DeLuca at the Feb. 3 Maplewood Township Committee meeting.

There was no discussion of the motion which was approved by a vote of 4-1, with Township Committeewoman India Larrier dissenting.

However, the Township Committee discussed the request at its Jan. 6 meeting (see the discussion starting at 2:26:30 in the video below).

“I guess I’m a little concerned with the density there and jamming people in that area. We have two new apartment [buildings] going up, and I would have a concern with building yet another one,” said Larrier on Jan. 6.

“We did share some of that [with the developer],” replied DeLuca, “and that’s why we went back and forth twice to get them to bring it down.” Elite Properties had previously requested changing the plan to allow it to build 32 units. DeLuca added, “This is a three-story building but this is a mansard roof so it actually looks like a 2-1/2 story building because the roof comes down.”

In a followup email, DeLuca confirmed that once the consultant drafts the changes to Elite Properties’ plan, it will be brought back to the Township Committee as an ordinance. After the ordinance is introduced, the requested changes will be sent to Planning Board for comments. Then, taking the Planning Board recommendation and public comment into account, the Township Committee will considered the ordinance on final passage at its following meeting. DeLuca said there is no timeline yet for the introduction of said ordinance.

DeLuca said that the financial plan for the development does not have to be amended since “there is no tax abatement on this portion of the project.”