The five members of the Maplewood Township Committee will cast their votes Tuesday on an ordinance that could change the face of the Village for many years to come.

The committee is to vote on whether to amend the redevelopment plan that serves as a guide to what can be built on the site of the Maplewood Post Office. Currently, the township is in financial negotiations with the developer, JMF Properties, which was selected by the township committee after the first developer pulled out of the project.

The meeting’s full agenda is attached as a PDF. 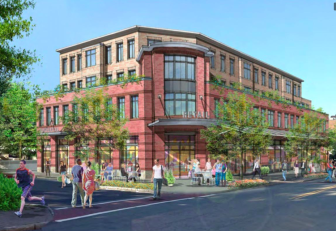 JMF’s principal, Joseph Forgione, will be at the meeting to present the plan, at the request of Mayor Vic DeLuca. The Mayor told The Village Green Friday that the plans will “continue to be modified up until Tuesday night’s meeting.”

Last week, Forgione met with members of the MVA design committee, some of whom were leery about the building’s increased height and mass.

“They loved some parts [of the plan] and did not like other elements,” said Forgione in a phone interview. “We heard their comments and we are going to try to address all of their concerns. I think we are going to satisfy them.”

At issue are several key details: whether the building’s maximum height should be allowed to increase from 45 to 53 feet, what the building’s setbacks should be, and the existence of an “architectural feature” at the corner of the building.

For more details on the proposed changes, see this article.

If the ordinance is passed, those changes will be memorialized in the redevelopment plan. The final site plan would still face approval by the Maplewood Village Alliance design review committee and would also still need to go back before the Maplewood Planning Board.

The Planning Board recently said it had “significant concerns” about the visual impact of the building’s greater mass.

At a public hearing at the last Township Committee meeting on January 20, several residents expressed reservations about the building’s size and design, and some asked the committee members to vote against the ordinance. (A vote was scheduled for that meeting but had to be tabled due to a technicality.)

Township Committeman Jerry Ryan said at the meeting that while he was comfortable that most of the changes the developer sought were “small,” he was concerned about the height increase.

“The thing that has always been most troubling to me… is the height of the thing,” said Ryan.

Jim Nathenson, who is vice chair of the Maplewood Planning Board, said the board had expressed “significant concern” about the visual impact of the building’s greater mass. Speaking as a resident, he asked the TC to reconsider amending the redevelopment plan and instead allow the planning board to decide whether to grant the developer specific variances. At that time, the board would have more detailed visual evidence — renderings, elevations, etc. — to help them make their decision.

However, if the TC voted to pass the ordinance, those changes would be “chiseled in stone,” said Nathenson.

“I have taken the comments of the Planning Board and the public into consideration and have had numerous discussions with the developer as part of the overall negotiations about the building and site plan,” said DeLuca on Friday. He also said JMF had not yet released a public copy of the most recent plan.

Resident Inda Sechzer, a principal in a local architecture firm that was one of the original bidders for the project, questioned the lack of zoning restrictions and setbacks for the rear of the building. “Have you considered how monolithic this will look from train station, from across the park and views from a distance…?”

She also criticized the design, which she said would be a “rubber stamp copy” of similar buildings in nearby areas. “It really is a shame that Maplewood will look like everyplace else.”

Another resident, who said he lives in Maplewood Village, agreed. “This is one of the few villages in New Jersey left that has that historic feeling,” he said, adding, “We just have to look over at South Orange to see what’s happening over there, and I think it’s the first step in destroying the Village.”

The committee also voted at the Jan. 20 meeting to introduce an ordinance to offer JMF Properties a 5-year tax abatement, or PILOT (payment in lieu of taxes), for the project. The committee is scheduled to vote on that ordinance’s final passage Tuesday.

David Huemer, a resident and former Township Committeeman, argued against the PILOT. “[The developer] is getting out of the affordable housing component for nothing,” he said. “This is arguably the most desirable piece of property [in the town]; if you give a PILOT…you will be in a very tough negotiating position with any developer anywhere in Maplewood going forward.”

Resident John Harvey, one of the founders of OhNo60 aka “the red balloon project,” asked officials to supply figures showing the difference between the revenue the township would receive from the PILOT versus the estimated tax revenue it would take in during that period – “so we know exactly what we’re giving away to the developer.”

After the public hearing, DeLuca addressed some of the criticisms about the building’s design. “I don’t think anyone up here [on the TC] is looking to do anything that’s negative,” he said. “I think we feel this is a positive addition. There is a difference of opinion, that’s clear.”

Emily Young, a Maplewood resident, is skeptical of the plan. “In the original town master plan, the Post Office was noted as a special and essential anchor of the Village,” said Young in an email. “Now it, like the Woman’s Club, is run out. Why? Why couldn’t the post office building be an adaptive reuse project, to develop an arts or cultural or exhibition space…?”

Young, who plans to attend Tuesday’s meeting, said the developer should build to the original height restriction of 45 feet and lessen the proposed design from four to three floors.

“If doing so makes it economically not viable for them to build, then the TC’s conclusion should be that the scale of the mixed-use project itself may not viable,” said Young. “…I want the Planning Board and the TC to stand by its Post Office Development Plan and design parameters, chief among them the height and bulk restrictions on the development. Doing anything otherwise makes clear that the interests and profit margins of the developer exceed those of the community.”