Updated 11:03 p.m. March 10, 2015. The SO Board of Trustees did not vote to approve the SOPAC budget; that will happens at a later time when the BOT approves the entire Village budget.

The news was music to the ears of the South Orange Village Trustees, a number of whom complimented SOPAC Executive Director Mark Packer on his presentation of the proposed 2o15 SOPAC budget of $279,500 at the March 9 Board of Trustees meeting.

“Although modest, that surplus marked an important turning point for us on the road to fiscal stability and sustainability,” Packer said.

The SOPAC budget will be voted on when the trustees vote to approve the entire Village budget.

Ron Charles, a representative of the Farrell Field Park Conservancy, presented the Board a list of possible realities for the usage of the vacant building that used to house the Jersey Animal Coalition. The possibilities included a child day care center, shared work space, office space, art studio, senior day care center or a bike shop.

See the proposal attached as a PDF.

“We are focused on having something that really provides the best need to the community,” Charles said.

Charles asked the Board if they would be willing to put out a general RFP open for all business proposers for the building to which Lewis said it would be “beneficial” to do so.

Trustee Deborah Davis Ford questioned whether or not the YMCA would be a suitable contender for the space, to which Charles said the organization would “fit the needs of the community.” However, Trustee Mark Rosner worried that the YMCA would bring in unwanted traffic to the single road that runs to the building.

South Orange has been involved in discussions with Maplewood about sharing animal control services and potentially using the JAC building for a shelter that would serve both towns.

Sgt. Michael Corrigan of the South Orange Police Department was promoted to lieutenant, with the Board’s unanimous vote behind him. 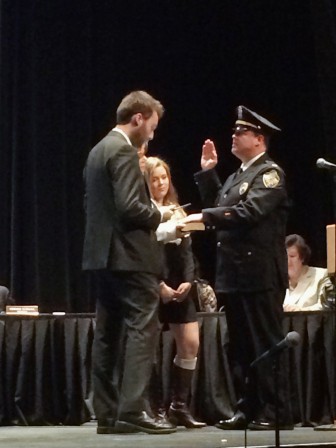 VP Alex Torpey swearing in SO Sgt. Michael Corrigan as Lieutenant at Monday’s Board of Trustees meeting.

“Mike, last year, did the pedestrian decoy details and we got statewide recognition [for that] and most of that credit goes to Mike,” said Chief James Chelel. “It’s always nice to see when a local guy does well.”

Corrigan has been involved with SOPD for nearly 20 years and is from South Orange, according to Chelel.

Lewis also announced that four bids for the renovation of Village Hall are currently under review. Meanwhile, the BOE approved improvements to Town facilities such as Village Hall, Public Works vehicles and IT equipment not exceeding $2,446,250.

In other action, the Board also: