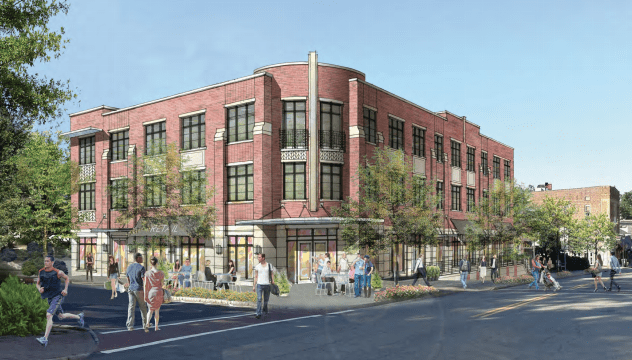 Village Keepers Inc. has filed an appeal with the Maplewood Planning Board on actions taken by the Maplewood Village Alliance Special Improvement District Board of Directors earlier this year regarding the Post House development project.

The proposed Post House project at the site of the former Maplewood Post Office has become a contentious subject this year, as opponents object to its height, mass, economic incentives, and failure to re-use the current post office structure. Opponents have also raised other concerns, including its economic impact on other Maplewood Village businesses.

The proposed development, by JMF Properties, would involve demolition of the old post office building and new construction comprised of ground-floor commercial space and two upper floors of 20 rental apartments, plus a partially visible subfloor and parking. Unlike the present post office building, the new building would offer circulation around the building since it would not back up all the way to the New Jersey Transit train tracks. Proponents, such as Mayor Vic DeLuca, say the building will have a positive impact on the Village’s economy.

The Village Keepers’ appeal involves the denial of a motion by the Alliance Board to have the town show “significant financial hardship” prior to the demolition of the building, as well as the Alliance’s approval of the PODRS — for Post Office Design Review Subcommittee — recommendations regarding the development on May 6.

According to the Planning Board’s agenda for its June 9 meeting (8:00 p.m. at Town Hall), part of the Planning Board’s new business that night will entail “Setting a date and time for hearing the appeal of specified actions of the Maplewood Village Special Improvement District, filed by Village Keepers, Inc., on May 21, 2015. ”

The appeal reads as follows:

Pursuant to Township Ordinance Section 237-9.2(D), Village Keepers, Inc. hereby appeals to the Township of Maplewood Planning Board the decisions of the Maplewood Village Special Improvement District, Inc. (the “Alliance”) taken on April 8 and May 6, 2015, in which the Alliance denied a motion to apply Township Ordinance Section 237-9.1(B)(6) to the plans submitted by the Township and/or Maplewood Redevelopers, LLC (including, but not limited to plans submitted by a related entity known as JMF Realty, LLC) in connection with the captioned site, and which requires the property owner to demonstrate to the Alliance a “significant financial hardship” (as well as other requirements) prior to the demolition of any building within the Maplewood Village Special Improvement District and, (b) the Alliance’s approval and forwarding of the application related to the above site to the Planning Board pursuant to Township Ordinance 237-9.1, et seq..

According to Dirk Olin, director of Village Keepers, “The Village Keepers feel that this process has violated the spirit, if not the letter, of the law. And after Tuesday’s primary outcome … we think it clearly thwarts the will of the people.”

Julie Doran, director of the Maplewood Village Alliance, said that the organization had no comment on the appeal.

Village Keepers was formed in April to combat the proposed development. The organization later endorsed Democratic primary challenger Greg Lembrich for Maplewood Township Committee. Lembrich was the lead vote-getter in the June 2 primary.