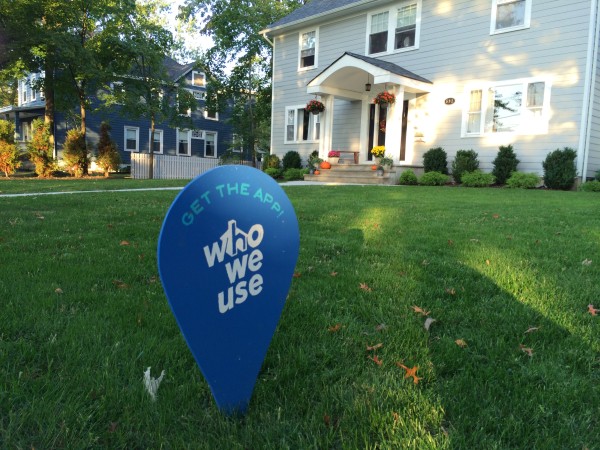 In September, WhoWeUse co-founders John Garbarino and Spencer Ante appeared at a Township Committee meeting to protest the fact that friends who had been sporting the signs on their lawns were issued summons by the Township.

Township Committee members said they would consider changing the code; the issue was referred to the Code Enforcement Committee, which is chaired by Committeewoman India Larrier.

Larrier reported on the Code Enforcement Committee’s work regarding signage at the Township Committee’s December 16 meeting. (View the discussion at 1:35:30 in the video below).

Currently, on-site contractors such as painters or roofers are allowed to display their signs on a customer’s lawn while they are performing the work on premises — and for a brief period afterward. Section 271-56 G of the code reads, in pertinent part, as follows:

Graphics identifying the sale, rental or lease of the premises on which located and an artisan or contractor identification while at work on the premises, subject to a maximum graphic area of six square feet with a width of no greater than 28 inches in the R-1-7 through R-2-4 and RGA Districts and nine square feet in all other districts. In addition, one sign rider no more than six inches in height may be added. Ground graphic provisions shall apply. Graphics must he removed within three business days after closing of title or lease or the reason for the graphic has ceased.

There is no allowance in the ordinance for commercial signs for contractors or vendors not at work on the premises. Larrier said that the Code Enforcement Committee discussed perhaps allowing businesses such as WhoWeUse — which is an app providing recommendations for local services — the ability to advertise by allowing a 45-day period where they can affix their sign to a customer’s lawn. A permit would be needed. Larrier noted that the committee was “keeping in mind that we would have to allow any home-based business [the ability] to do the same.”

Mayor Vic DeLuca noted that this potential change was “still in the discussion phase.” He noted that he had had a discussion about it at the Chamber of Commerce board meeting.

Committeeman Jerry Ryan was skeptical about the proposed change, asking, “Why should I be allowed to advertise for my neighbor’s business?”

Ryan said, “I think that is the difference.”

DeLuca replied, “We are in the computer age and we have to think about whether or not it makes sense to change what we are doing — and it may not.”

Later in an email exchange, Ryan further clarified his comments: “Without some regulation of commercial speech, there’s nothing to prevent someone from covering their lawns and houses and everything with advertising, which would disrupt the residential character of the neighborhood. I don’t think the fact that the sign is advertising an IT based business/virtual business/home based business changes that fact.”

Ryan added, “That said, I think these folks have an interesting business idea and I admire them for their creativity in advertising!”