The Maplewood Township Committee agreed to grant an easement to the developers of The Clarus, the new mixed-use building being constructed at the site of the former Post Office, to place an enclosed garbage dumpster at the rear of the building.

The easement, which the TC passed Tuesday night 4-1 (with Greg Lembrich voting against) would grant permission to JMF Maplewood LLC and Gladstone at Maplewood LLC for the dumpster, which would be used for garbage generated by a potential restaurant. The dumpster would be screened within a concrete enclosure and be situated directly across from the entrance to the Village Coffee parking lot along the train tracks, outside the new pedestrian tunnel.

The easement is contingent on the Planning Board approving the revised site plan and will become null and void if no restaurant leases the space, said township attorney Roger Desiderio. In addition, the developer will pay the township $5,000 as compensation for being granted the easement.

Mayor Vic DeLuca said that initially, the developer, Joe Forgione, was hesitant to lease a space to a restaurateur. However, DeLuca convinced him that a restaurant would increase the economic vitality of the new development and the Village as a whole.

Forgione has been negotiating with one or several restaurateurs for months but has not confirmed who they are. DeLuca also declined to confirm a potential tenant’s identity. DeLuca said Tuesday night that the tenant would not sign a lease until he or she knows the dumpster will be permitted.

Lembrich said he was “disappointed” that the new pedestrian tunnel would open to a dumpster. When the initial site plan was passed, placement of garbage dumpsters was a point of contention, and the developers agreed to keep dumpsters for retail and apartment tenants inside the building.

Lembrich also said he remained “concerned about parking capacity” at the development and that especially with a restaurant, “we’re going to have some serious parking problems.”

DeLuca agreed that parking was an issue; however, “having a restaurant/bar there will be a huge plus for Maplewood Village.”

Lembrich and Committeewoman India Larrier said they wanted compensation to the town to be a prerequisite of the easement. Although he hadn’t yet discussed the issue with Forgione, DeLuca suggested building the $5,000 payment into the resolution.

Placement of the dumpster would require a slight reconfiguration of the parking spots around it, which DeLuca said would actually be an improvement. In addition, the entrance to the pedestrian tunnel would be widened. (The easement also allows for a grease trap to be added to the back of the building, as well as the relocation of a transformer underground.)

See the resolution, a memo and a site plan drawing attached below. 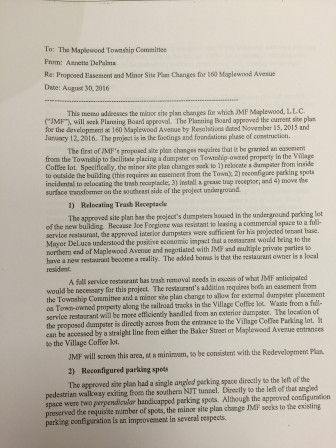 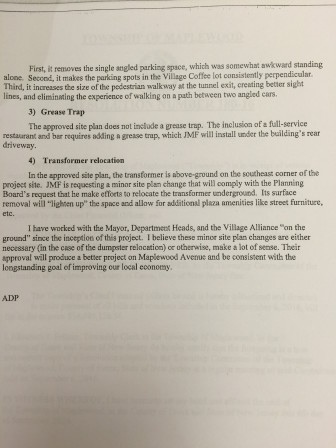 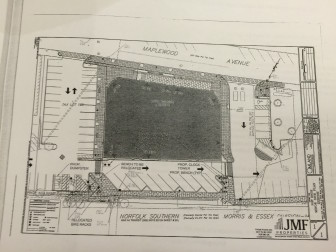 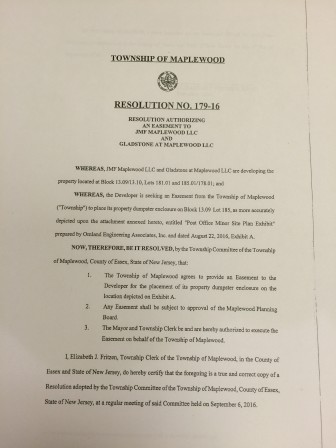 The easement and resulting site plan change will go to the Planning Board for discussion and a vote in October, and then it will come back to the Township Committee for final passage.