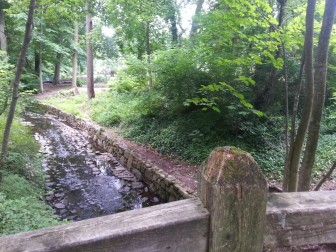 8/4: This article has been updated with a quote from David Nial.

Maplewood will soon boast a revamped outdoor space, as the small, wooded area that runs along Crooked Brook behind Jefferson School is being given a second life.

Longtime Maplewoodian, former Mayor and all-around civic booster Fred Profeta is behind the refurbishment of the space, which will be called Brook Path. Along with other supporters, Profeta is helping to fund improvements including repaving the asphalt path, adding new plantings and new lighting. Matching funds will come from the township’s Open Space Trust Fund, said Township Committeeman Jerry Ryan.

“The space is very special to me,” said Profeta.  “It’s a very pretty wooded glen, and it has been that way for many decades. When I was growing up on Maplewood Avenue, at the end of Beach Place, I used to take the brook path four times a day (we went home for lunch) to and from Jefferson School.  We played many games on that path, and it was more beautiful then.” 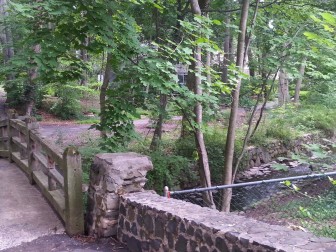 Profeta said there used to be more rhododendron and mountain laurel along the path, as well as a lot more color. He asked David Nial of the Maplewood Garden Club, who is supervising the planting, to choose plants that would bring back a lot of color to the space.

Profeta said with the new lighting and a new path surface, the green space will be a great asset to the community. “People will be able to use it at night, going to and from the Village, and the swan lights should be beautiful,” said Profeta, who explained that the lighting will be very directed and will not shine in people’s homes, but will make it safe to walk through.

Nial has completed much of the planting already, said Profeta. All of the trees have been preserved, and Nial removed some existing plants that were invasive species.

“The plantings so far are trees and shrubs, mostly natives, that offer color…either in flower, fruit or fall foliage,” said Nial. “The soil has been improved so that over time we can add other plants enhancing the woodland ambience. The Maplewood Garden Club will continue to consider Brook Path as one of our ‘community projects.'”

The electric and the bases for the lights have installed and the town is waiting for the lights themselves to arrive, said Township Administrator Joseph Manning. 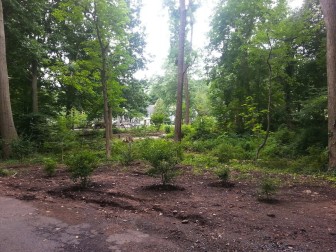 The township’s Engineering department will be in charge of the repaving and installation of swan lighting, and the Department of Public Works will maintain the area as it does now, including plowing in the winter and maintaining the sanitary sewer system.

Most of the property is owned by the town, with a small section belonging to the school district, which granted an easement for the project. The township has agreed to maintain the green space as it is for at least 25 years, said Profeta. 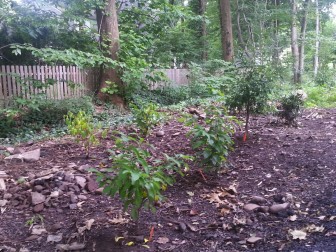 Once the project is completed sometime this fall, Profeta looks forward to Brook Path being “a safe area [for residents] to traverse, whether coming back from the train, or dinner in the Village, or just walking the dog.”