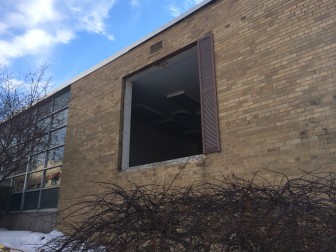 Windows are being removed at the Maplewood Post Office for asbestos abatement.

Local residents were excited to see activity inside the former Maplewood Post Office building on Maplewood Avenue in recent days.

Today, workers can be seen removing windows and pulling them inside the building; the path along the south side of the building (facing Village Coffee) leading the NJ Transit tunnel has been cordoned off.

Post House Developer Joe Forgione says that the workers are removing the windows for asbestos abatement — there is asbestos in the caulking — in order to obtain demolition permits from the Maplewood Building Department.

“We need to show the building department that we have disposed of the windows properly,” Forgione told Village Green. Windows are being pulled inside in order to ensure public safety, he explained.

(Forgione noted that he has had numerous requests from residents for the windows; however, he said he cannot provide windows to anyone due to the asbestos.)

Forgione added that much of the asbestos abatement work has been timed for the weekend so as not to inconvenience commuters who use the path to the train tunnel. “We’re being extra cautious. We don’t want to inconvenience anybody.”

Mayor Vic DeLuca confirmed that “demolition of the building will take place after permits are obtained from the Township” and added that “a demolition plan is still being prepared and will be reviewed by the Building Department prior to issuing demolition permits.”

The Post Office building is being demolished to make way for a mixed-use development with ground floor commercial space and 20 apartment on the second and third floors. A partially submerged subfloor will contain parking.

Read some of previous coverage of the Maplewood Post Office/Post House project here:

NJ to Expand Eligibility for COVID-19 Vaccines to...