“…Do you understand that if you agree to our terms, you will be added to our roster of available Helpers and subcontracted out by local wives to sleep with their husbands?

“…and do you understand that you will have to strictly adhere to the individual terms of the woman who requests you…?

“No matter what the husband asks you for, you’ve been subcontracted by his wife. She’s in charge.”

“Got it,” said Audra. “No one falling in love with me or late hour booty calls. Just sex, no strings…And I assume that if I’m assigned to someone lazy in bed or sexually unproductive, or unattractive, I can request to be removed from his roster?”

“…Of course….This is equally for your benefit, remember.”

V.C. Chickering had lived in Maplewood for some time, as a married and then divorced mother of one, before she hit on the idea that the town had a book in it somewhere.

And it was a racy one.

But first things first: despite certain similarities, Maplewood is not the setting for Nookietown, Chickering’s first novel, a risqué, comical look at a woman who launches an underground barter system in her New Jersey suburban town that matches up lonely divorced women with equally sex-starved married men — with their wives’ explicit approval. (Published by St. Martin’s Press, the book will be released on February 23. It’s part of a two-book deal, and Warner Bros. TV bought the television rights in a bidding war among several other networks.) 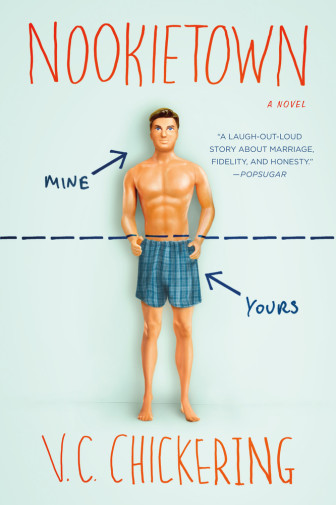 Described as “…a Fifty Shades of Grey for the married and divorced set” (Library Journal) — minus the S&M — that “alternates between moments of true hilarity and deep introspection” (Kirkus Reviews), Nookietown seems poised for book-club bestsellerdom.

(Chickering will be reading from Nookietown at Words Bookstore in Maplewood Saturday, Feb. 27 at 7:30 p.m., as part of a more extensive tour. For more info see the author’s website.)

Protagonist Lucy, 40-something divorced mother of a young son, hatches her scheme in a quest for some desperately needed, relatively safe sex while “helping” her married friends spice up their sex lives. Eventually the system begins to implode, leading to an inevitable scandal with Lucy at the center.

The plot came to Chickering from hang-out sessions with her female pals. “My married friends would talk about what they were up to, what sports their kids were playing,” said the writer/performer (in the alt band Tori Erstwhile and the Montys) in a recent interview at Cedar Ridge Cafe. Recently divorced, Chickering would counter, ‘I just wish I had someone to sleep with once every two weeks, who would then go home.'”

Inevitably, someone would say, “You can totally have my husband, you’re welcome to him!” After hearing the same joke multiple times from all different types of women, the idea for a novel was born.

Filled with humorous and bawdy scenes of women talking about everything women talk about, interspersed with plenty of spicy sex (married, divorced, solo), the book also poignantly explores Lucy’s yearning for companionship after a bruising divorce, and her longing for another child despite infertility.

The book mirrors the author’s own conflicted attitudes about marriage. While she deeply admires long-married friends who sustain healthy sex lives, she admits that “marriage is hard” and wonders if at least for some, it is a broken convention.

“You think you know how your life is going to unfold, then it takes a left turn and it’s nothing like you planned,” said Chickering. “I had to reinvent the story of my life, and I gave myself permission to go for it.” 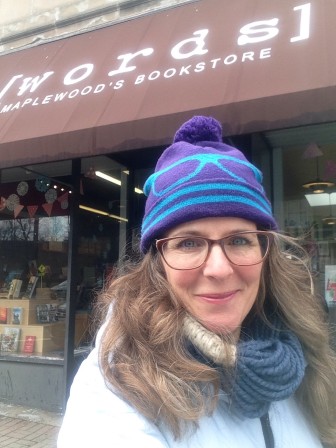 A writer for Comedy Central and MTV as well as author of a local column in the News Record and a blog, Chickering had never written a book until one summer when her son was away at camp. One inspiration was Chris Baty’s No Plot, No Problem, which guides newbie novelists to crank out 1,700 words a day for a month. The key? No distractions — including children, laundry, internet or going out for coffee. “Everything else is second.”

The slog was “brutal,” she said. “If I [wasn’t] divorced, or if I had a boyfriend or played tennis — I wouldn’t have done this.” She stuck to it and after a month, had a rough draft she started circulating to close friends. Eleven drafts and four years later, Nookietown was born.

Her advice to women is to allow themselves to tackle the thing that most terrifies them. “Just take a leap.”

Humor is deeply important to Chickering. A graduate of New York University, she co-produced and directed a documentary about the alternative comedy scene on Manhattan’s Lower East Side in the late 1990s, and often writes and performs comedic pieces and songs. She is most proud of Nookietown’s humor, and hopes people will see it as a funny/sexy book — emphasis on the funny. (She is fond of one person’s description of it as Desperate Housewives meets Sex in the City meets Bridesmaids.)

She is currently at work on a second book, which will not be a continuation of Nookietown but will be equally risque and humorous. In addition, she completed a pilot on spec for Warner Bros. TV.

Chickering admitted to being “terrified” by how Nookietown will be received, both in SOMA and at large, but said, “My friends have assured me they’ll stay my friends, and beyond that I have no control.”

“I’m stirring the pot to sell books,” said Chickering. “It’s a risk, but I hope it works.”