“I wish I had more space in my house,” Katherine Gebremedhin said as she and her young son looked around the new Avian and John home furnishings store in Maplewood. They were walking home from a karate party and wandered in. “I wish we had more stuff like this on Springfield Avenue.” 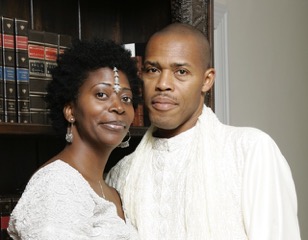 Through plate glass windows, warm light shines on John Carraby’s handmade reclaimed wood furniture. On one of his tables, stacks of collectible Corningware dishes nestle next to a flock of crystal cake stands. John is half of the South Orange duo behind the store that opened in August, along with his wife Avian Carraby, who is in charge of its look and feel. Both are graduates of the Fashion Institute of Technology in New York City and have been creating and selling art together for decades. 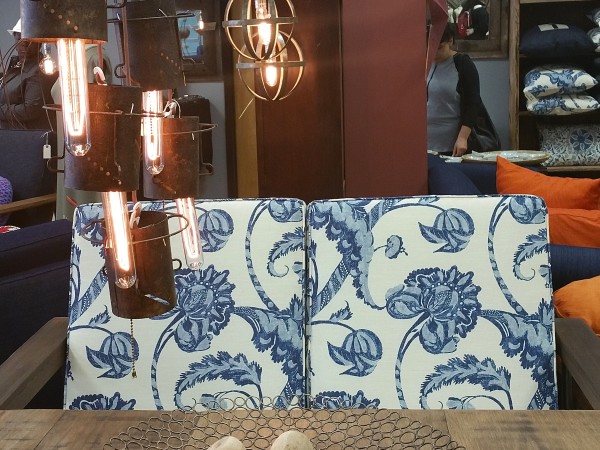 One of John Carraby’s many hand-crafted furnishings.

“There is so much excitement about Avian and John opening on Springfield Avenue in Maplewood and it is easy to understand why once you step inside,” said Julie Doran of the Springfield Avenue Partnership. “The space is as gorgeous as the merchandise is stunning. And having a local family as owners gives special meaning to shopping locally.”

Near the entrance, a large wooden chest of drawers stands ready with earrings to mix and match, a nod to Avian’s earlier days as a jewelry designer. She’s created a flow in the store to feature John’s pieces along with small, carefully curated collections of housewares. Some are vintage classics, some handmade and brand new. Along the wall, a line of old wooden hand tools leads to metal scales and the well-worn weights that make them work, a compilation of beautifully-worn objects from another time. Toward the back, a bright arrangement of baskets woven by artisans in Senegal greets a large tub of dried lavender waiting to be scooped into a hot bath. Weathered metal stars and wooden signs with the names of nearby towns accent in just the right place. 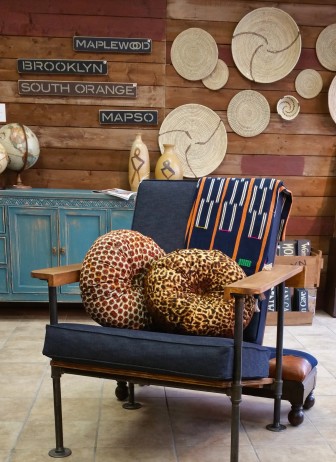 Abina Wood’s pillows on one of John Carraby’s custom chairs.

Art Takes Couple from Trinidad to NYC and then South Orange

The Carrabys met as teenagers waiting at the same taxi stand, a common way to get to school in Trinidad, but they didn’t become friends until they found themselves at the same college. At FIT, John studied fashion and Avian retail merchandising, skills they’ve balanced to build a creative life together. They started offering John’s clothing in a small Park Slope storefront, gradually adding housewares. Next, they moved to Fort Greene and switched to selling furniture designed by John that was manufactured in India. Avian said managing the process from afar wasn’t easy, and since John is someone determined to master something new every year “we just decided that he’s going to make his own furniture.” In 2008, they closed the shop and began selling custom pieces at the Brooklyn Flea.

About being in a relationship and running a business together, Avian said, “People think it’s hard. I think it’s the easiest thing ever.” 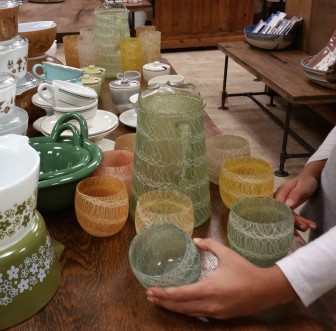 Vintage dishes at Avian and John

Married for 21 years, 15 of them spent in South Orange raising two sons who are now in college, the couple again has a store close to home. ‘We didn’t know if New Jersey was ready for us,’ Avian said, so they did a test run with Bkyln West, a pop-up store in Maplewood village at the end of 2014. It did well, so they started looking and waiting for the right location. Now, Avian can often be found at the new store while John designs and builds in his studio. They spend weekends together selling at the Brooklyn Flea.

Bringing people together with special events is also part of their philosophy. Every weekend in October, Avian and John hosted an Artisan Market in the adjacent parking lot where artist friends old and new set up their wares. Some, like Epperson, who was a contestant on ‘Project Runway,’ go back to their days together at FIT. Others, like Abina Wood who lives in Orange, NJ and makes dresses, pillows and luxe leather goods, are newer friends. Wood, a civil engineer working fulltime for Consolidated Edison, sews after hours for her label Pomeroon by Abina. “I’m in a hardhat and boots all week,’ she said, ‘then I go home and the artsy side comes out.” Her patterned textiles work well with John’s furniture, pulling spots of color into the environment. 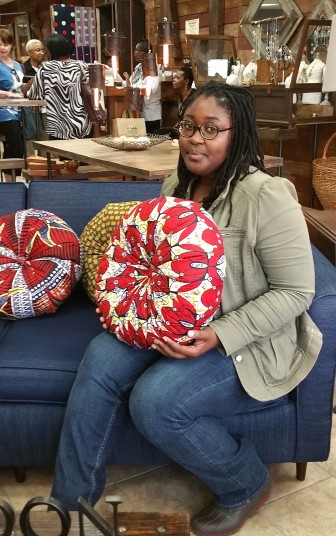 Abina Wood with one of her creations at Avian and John.

Pediatrician Carolee Ngozi Wosu said she enjoyed talking with artist Teaty Pawoo while she bought a pair of her earrings. Pawoo is a metalsmith who draws on her African heritage to design jewelry and sells mostly at art shows. Her company, Art Jewelry by Sistaphyre, also features a men’s line created by her partner Ebere Adighibe. Both work with bronze and semi-precious stones and many of Pawoo’s pieces feature dangling sterling silver shapes that asymmetrically balance. She said she’s willing to make them match if a customer insists, “but I would cry a little bit.”

Avian and John’s Artisan Market is over for the season, but they plan to bring it back in the spring. They also envision adding a cafe at some point in the future. “When it’s time, the space is going to be ready for us,” Avian said, noting that the store next door recently leased to a real estate agent. They would also like to open in different cities and form a new retail chain. “It’s not just a furniture store,’ she said. “It’s a lifestyle store.”

Meanwhile, the store is a must-visit for the holidays. “I hope everyone remembers to support Avian and John and all their favorite local businesses this holiday season,” said Doran. “Buying just one holiday gift in each of your favorite local stores really can make the difference in retaining our independent local businesses. Oh, and one other exciting detail, the free customer parking lot adjacent to the store!”

Find Avian and John at 1857 Springfield Avenue or at the Brooklyn Flea, indoors for the winter at 1 Hanson Place.