On Wednesday, June 8, 2022, the Columbia High School auditorium filled with excited students to “celebrate CHS past, present, and future.” After a warm and energetic welcome from the CHS Jazz Band, students were greeted by charismatic and proud members of the Student Council and Hall of Fame committee, who introduced the four inductees. Although two of the four have passed, their legacies live on through relatives and friends who spoke at the ceremony, including author Judith Warner, a good friend and ghostwriter of honoree Grace Mirabella, CHS Class of 1946, and editor-in-chief of Vogue from 1971-88.

A video, created by former and current students of Anthony Campiglia’s TV Production class, showcased the past inductees, inspiring students to envision their successes in the ones that came before them. An homage to the iconic film, The Breakfast Club, the video complimented the nostalgic ambiance of the ceremony and ended with a moving shot of the auditorium seats that current students filled.

Historically, most inductees are honored for what they accomplished after graduation. This year is different with the induction of Bernard “Buzzy” Hellring Jr., international lawyer Jonny Hines, and famed film producer Joel Silver (all three members of the CHS Class of 1970) for their gift of Ultimate Frisbee to the world. It was pointed out by Hellring’s sister, Heidi — who spoke on behalf of Hellring — that these individuals are being commemorated for what they accomplished while still attending CHS, reminding CHS students that it is never too early to strive for greatness.

The Hall of Fame induction ceremony is something CHS students look forward to every year. The selection committee takes great pains to keep the honorees secret, so students never know which actor or musician, athlete or editor, may drive MAPSO’s youth to be the best version of themselves. This tradition is something CHS students treasure. Justin Strugger, ‘23, speaks on behalf of his peers, “The Hall of Fame ceremony was amazing, epic, or as one could say…ultimate.” On this day, students in the seats cannot be blamed for imagining themselves being recognized on the CHS Hall of Fame themselves.

Reporting by Georgie Gassaro and Casey Slavin of The Columbian, CHS’s award-winning newspaper.

Photos are by CHS students Sarah Prosetti and Jack Kalsched, except where noted. 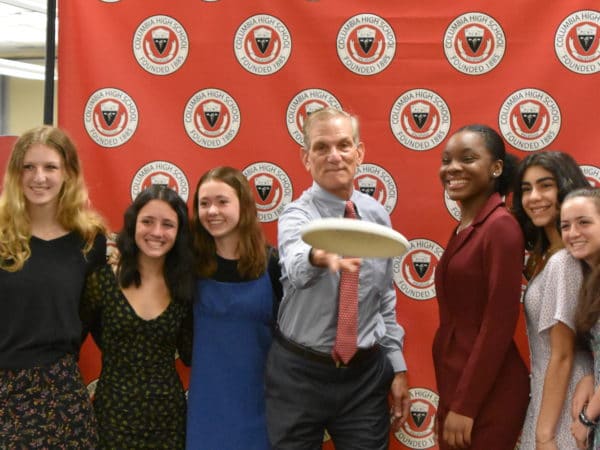 Jonny Hines ’70, with members of the Columbia High School Hall of Fame Committee, tossing the frisbee.