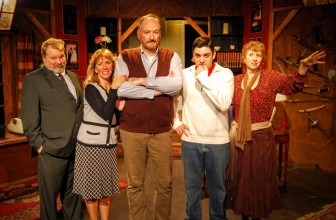 If you want to catch interACT Theatre’s production of Deathtrap, the classic thriller-comedy written by Ira Levin, this weekend is your last chance.

Online tickets are $18 for adults and $15 for seniors and students, and can be purchased at interactproductions.tix.com.  All tickets at the box office are $20.

The play, famous for its plot twists and meta humor, holds the record for being the longest running thriller-comedy on Broadway, and the talent Mr. Clarey has assembled for this production is impressive.  The cast includes Ken Magos as playwright Sidney Bruhl, Lisa Black as his wife Myra Bruhl (and the show’s Costume Designer), Nick Wolf as Sidney’s former student Clifford Anderson, Ginny S. Crooks as the psychic neighbor Helga ten Dorp, and Robert MacLachlan as Sidney’s lawyer Porter Milgrim.

Behind the scenes are some interACT regulars: Sabrina Santoro and Mark J. Parker produce, Erik Gaden is the Fight Choreographer, Zach Pizza is the Lighting Designer, Christine Gaden is the Light Board Operator, and John M. Olsen is the head of Props.  New to the company are Stage Manager Melissa Milne and Sound Designer Emma Matters.

Who dies? Who lives? Who fakes their death? You’ll have to head to the Baird Theatre On Three to see for yourself!

interACT Theatre Productions is a theatre of the community located in South Orange, NJ. Founded in 2009, the theatre is committed to building strong ties within the community by producing thought-provoking plays and musicals that challenge stereotypes and prejudices. interACT Theatre aims to create a community theatre that is both inclusive and accessible to its participants and audiences while maintaining high quality productions. https://www.interactproductions.org/about 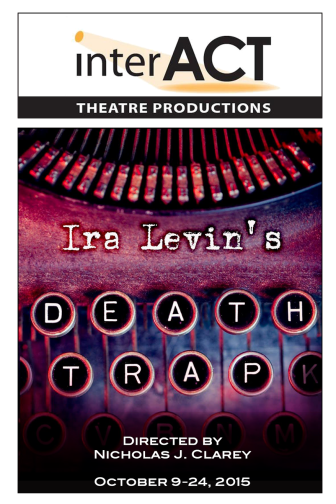