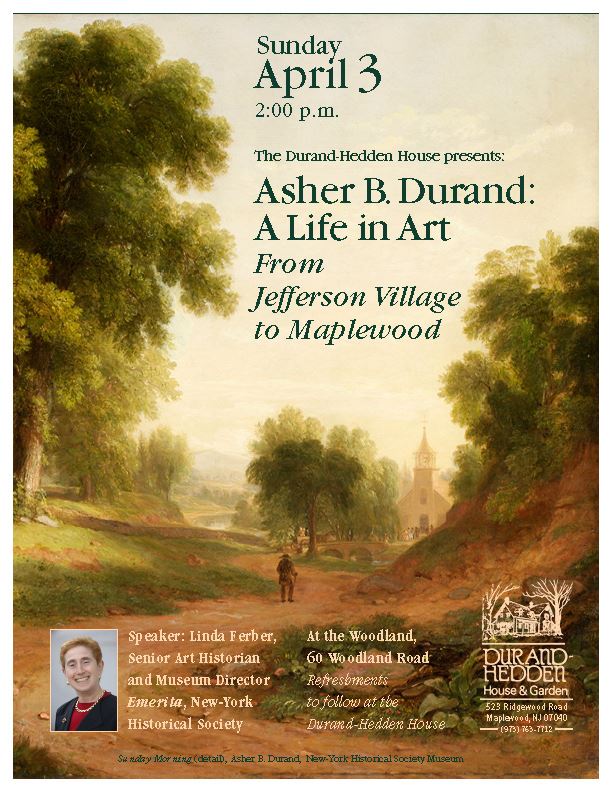 Join Durand-Hedden House & Garden at The Woodland on Sunday, April 3, at 2 p.m. for an illustrated lecture, Asher B. Durand’s Life in Art: From Jefferson Village to Maplewood.

The talk will be presented by a well-known Durand expert Dr. Linda S. Ferber, Senior Art Historian and Museum Director Emerita at the New-York Historical Society and will provide insights into the life and work of a native son of Maplewood, Asher B. Durand (1796-1886), who became one of the most important artists of the 19th century.

The event will be held at The Woodland, 60 Woodland Road, Maplewood. Following the lecture, the audience is invited to the Durand-Hedden House at 523 Ridgewood Road for refreshments and to view the House and collection.

Life, contributions, and place in the history of American art

Artist Asher B. Durand led a long and extraordinary life. He was born in rural New Jersey when George Washington was still president. He died in New Jersey the year of the first exhibition of French Impressionism in America. During his multi-faceted six-decade-long career, Durand truly lived a life in art as an engraver and then as a painter, first of portraits and ultimately of landscape. In all three endeavors – engraving, portraiture, and landscape painting – Durand played a major role in the art of his time by creating resonant images that contributed to an emerging American national and cultural identity.

Speaker Dr. Linda S. Ferber
For this event, the Durand-Hedden House is thrilled to host prominent art historian and Durand expert, Dr. Linda S. Ferber. In 2007, Dr. Ferber organized the first major retrospective in thirty-five years devoted to Durand’s career: Kindred Spirits: Asher B Durand and the American Landscape for the Brooklyn Museum where she had been the Andrew Mellon Curator of American Art and Chief Curator from 1970 to 2005. Most recently, from 2005 until the end of 2013, she served as Vice President and Museum Director at the New-York Historical Society (now Emerita.) In 2002, she received the Lawrence A. Fleishman Award for Scholarly Excellence from the Archives of American Art. Dr. Ferber has organized exhibitions, published, taught and lectured widely on a variety of topics in American art history in addition to Asher B. Durand and the Hudson River School including William Trost Richards, the American Pre-Raphaelites, the American Watercolor Movement, The Eight and the Ashcan School, and Albert Bierstadt. At the New-York Historical Society, Dr. Ferber launched Sharing an American Treasure, a highly successful traveling exhibition program drawn from the Society’s own rich collections. She was awarded the 2010 Henry Allen Moe Prize for Catalogues of Distinction in the Arts for her book, The Hudson River School: Nature and the American Vision. That exhibition, highlighting the Society’s landscape collections, is still traveling.

In 2011, Dr. Ferber organized with guest curator Dr. Barbara Gallati the traveling exhibition highlighting the N-YHS’s rich trove of 19th-century narrative paintings titled: Making American Taste: Narrative Art for a New Democracy. Her exhibition and publication, The Coast & the Sea: Marine and Maritime Art in America, debuted at the Society of the Four Arts in Palm Beach in 2013 and has traveled to a number of other venues.

While Dr. Ferber maintains an association with the Society, she is also active as an independent curator and art historian. Current projects include serving as guest curator for an exhibition at the New York Botanical Gardens, opening May 14, 2016, titled Impressionism: American Gardens on Canvas and at the National Gallery of Art, an exhibition about the American Pre-Raphaelites.

Durand-Hedden House is dedicated to telling the history of the development of Maplewood and the surrounding area in new and engaging ways. It is located in Grasmere Park at 523 Ridgewood Road in Maplewood. For more information or to arrange group tours call 973-763-7712. You can also visit our website at durandhedden.org and find us on Facebook and Twitter. 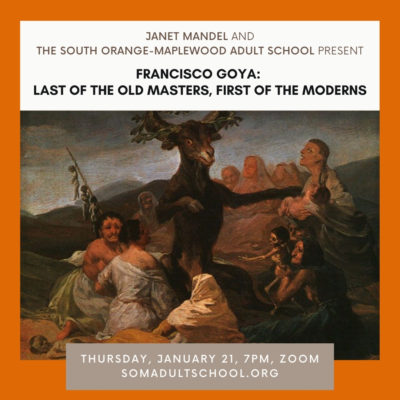