written by The Maplewood Division of Arts & Culture August 25, 2020
0 FacebookTwitterPinterestEmail

From The Maplewood Division of Arts & Culture

The Springfield Avenue Gazebo Concert Series returns to Maplewood in early fall on August 28th, and runs through September 25th. All concerts will take place on Friday nights starting at 7pm and are free and open to the public.

The Maplewood Division of Arts & Culture is focused on bringing alternative rhythmic sounds to Springfield Avenue, while at the same time providing safe, outdoor entertainment to the community. Ana De Archuleta, Director of Arts & Culture sees The Gazebo Concerts as, “an opportunity to experience diverse cadences and varied styles. The fresh beats and rhythms of these unique bands will make you want to move. Come out and enjoy an evening of safe outdoor entertainment with your family and neighbors.”

Safety measures in place include social distancing ambassadors, signage reminders and space marking to maintain a 6-foot distance. Masks are required. For those who wish to enjoy from the comfort of their own homes, the concerts will live stream on Facebook and Instagram.

The series kicks off on Friday, August 28th with The Kyle Lacy Band — rockabilly reminiscent of classic soul music incorporating blues, and gospel. On September 4th The Gotham Easy — hot jazz born on the mean streets of NYC follows with New Orleans time-honored tradition. September 11th, De Tierra Caliente — Latin fusion delivers sabor, spice and the alegria of warm-weather countries. September 18th, is a trip down to the equator with Verdict — soulful reggae and high energy soca. The series finishes on September 25th with Cimarrones and the typical Afro-Puerto Rican sounds of bomba y plena.

The 2020 Concert Series at the Springfield Avenue Gazebo

Fridays at 7pm. Free and open to the public. 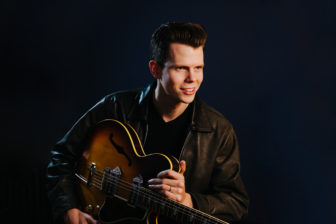 Kyle Lacy is a singer and multi-instrumentalist originally from Atlanta Georgia and was born in 1990. However, his time machine made a quick refuel stop in 1956 and he was immediately infected with the DNA that gave birth to rock ‘n’ roll. Try as he could to escape those roots, he only made stops for the soul of Sam Cooke and Aretha Franklin, the soul folk of Van Morrison, and the swing of Brian Setzer.  He and his band deliver the kind of rock ‘n’ roll excitement that the music world has mourned for decades. “The Road To Tomorrow” is his first full-length album, out February 14, 2020 on Dala Records. 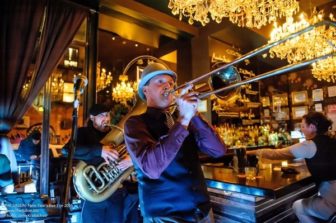 The Gotham Easy is a hot jazz band born on the mean streets of NYC. While being completely at ease playing classic standards in the time-honored New Orleans tradition, the band brings a brash vitality to music that is all too often treated as a delicate museum piece. The Gotham Easy’s members have been playing together since 2006. Whether revitalizing the traditional jazz canon with their excitement and energy, or whipping an audience into a frenzy with their raucous original compositions, The Gotham Easy brings the music of the early 20th century into the early 21st century with a fresh style and attitude. 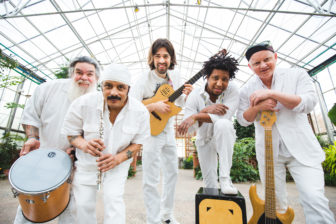 De Tierra Caliente is a Latin fusion band whose music fills the air with bright colors and gets everybody up and dancing. At a show you can’t help but heat up as intoxicating songs in Spanish, English and Portuguese sing out the bright hues and familial warmth of a South American kitchen.

Verdict has been rocking the house from venues as varied as the fabled Stone Pony in Asbury Park to the NFL Owners Meeting at the Super Bowl in Miami. Their polished energy has been fed from the wide-ranging experiences of jamming with Chaka Khan and Stevie Wonder (what a surreal moment to have Johnny whispering the lyrics to Marley’s “Waiting in Vain” in Stevie’s ear since he didn’t know the second verse by heart), to performing “Stir it Up” and Chick Corea’s “Spain” with Prince Ali of Iran sitting in on drums. 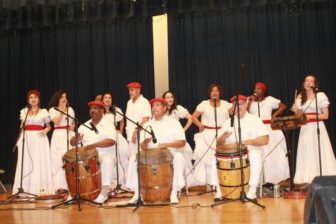 Cimarrones is one of the most sought after bomba and plena ensembles in New Jersey. Cimarrones has performed and instructed in very diverse venues. One of the reasons that Cimarrones is so well sought out is their ability to engage the audience, create high energy and educate them at the same time. Cimarrones released its first CD Viejos Tiempos in April of 2009.  The CD is a compilation of traditional bomba, Colombian bullerengue songs interpreted in bomba and fusion with hip hop and Reggaeton. Audiences are expected to participate either by playing an instrument, singing, or dancing which is the essence of bomba.